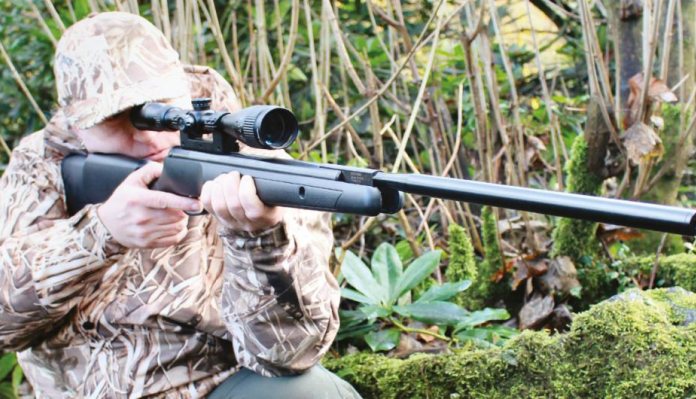 Initially, we saw the Phantom X – a synthetic stocked, lightweight break-barrel, springer with open sights bundled in a combo format with a basic but capable optic. Such was the popularity of that rifle, Crosman decided to use its solid, dependable action but dress it up a bit in a centrefire-styled stock plus omitting the open sights in favour of a bull barrel shroud/cum silencer. So, say hello to the Mk II version, now I pose the question, will this make over offer just cosmetic or practical benefits? We shall see.

Cosmetically the Mk II has a distinctive centrefire biased styling, in fact it’s very reminiscent to the Remington 700 series of full-bores. The quite sleek and stylish stock design features a well-defined cheekpiece with a relatively low comb ending in a substantially contoured, full black rubber butt pad. The very slim neck is sculpted with channelling so both the palm and fingers of the shooting hand easily and effortlessly wrap around the palm swell of the steep drop-down pistol grip. Get the firing hand grip right and you’re already half the way there, I reckon.

The lengthy and slim forend has a rounded underside and features long panels of cast-in texturing surfaces to aid grip. Not what we might recognise or term as traditional style, cut chequering or stippling, the inner area of these panels (also seen at the grip) has unusually been given a ‘leatherette’ finish. But fear not, as all combine to make the stock look very stylish, but equally are practical as the more you handle the rifle you do feel the benefits of the overall design. Reason being, it feels very solid and secure in the hold, balances well and although pushing the tape to a full 44” in overall length comes cleanly and easily up to the shoulder.

Like many other Crosman air rifles, the Phantom Mk II comes bundled with a scope and mounts. In this instance, you get a Center Point 3 – 9 x 40AO and a sturdy one-piece mount plus all Allen keys for mounting and on-rifle adjustment. In other words, this is a package that comes ready to shoot straight from the box, which in this case, and as has certainly proved, something that many airgunners find very appealing. This sort of package deal is particularly attractive for new comers or those who just want a hunting air rifle and are not that into all the minute of scope choice etc. To be honest, the spec of 3-9x40, though not that glamourous to some is perfectly adequate for the job in hand.

Although the windage and elevation turrets click very positively around, they’re of the open, non-locking design and surprisingly do not come with protective caps. So, in use, be aware of where they are set and check this position before committing to a shot on live quarry, as it’s all too easy to knock them off zero accidently. However, they do feature a parallax ring on the objective bell and its heavy ridging make it a cinch to operate for a very precise focused image.

Not only is the cocking stroke very smooth, but it’s virtually effortless, due to the fact that the lengthy barrel shroud assembly measures 18.75”, so affords a good level of leverage. The lack of effort needed to cock the rifle is also aided by an articulated cocking linkage, which also results in there not being an excessive amount of material ‘cut out’ below the forend of the stock, so solidity and strength of the ‘handle’ isn’t in the least compromised.

The barrel locks solidly in the open position for direct pellet loading and thanks to a large wedge-shaped détent and generously sized breech seal, when returned to the closed position locks back up very securely with no worries that you have anything less than a very air tight seal. After setting a 25 yard zero for the .22 calibre test rifle, I really began to realise just how effective the bull barrel shroud is at taming muzzle report. It’s able to do this as its end cap that screws onto the barrel itself uses strategically placed internal vent holes to direct expelled air upon discharge back down the inside – hence its effectiveness.

Also, due to the smooth firing cycle, the rifle shows very low recoil, despite it being a full power mechanical action springer. The two-stage adjustable trigger unit has a very business-like metal blade with smaller manual safety blade nicely positioned within the integral ABS trigger guard. The level of adjustment isn’t the greatest and although I experienced a slight amount of creep, when used to the nuance of the trigger’s operation, it still showed itself capable of producing sub 1” groupings at the afore mentioned zero.

The Crosman Phantom M kII is well-built, smooth in operation, accurate and well-balanced! Taking into consideration the quality of hardware it comes bundled with, proves itself to be a highly practical and very capable general-purpose air rifle.