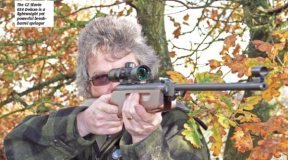 CZ gunmakers have almost dominated the market with regard to excellent value and well-made .22 rimfire rifles for pest control, but their Slavia range of air guns for similar quarry species is less well-known. This is a shame as they are good solid and dependable air rifles just like their rimfire counterparts.

The Slavia is a typical break barrel single shot air rifle powered by a spring piston system with three models from the basic 630 model to 631 Lux with a larger stock to the 634 Deluxe with more power and a choice of beech or polymer stock in three colour options. Made since 1955 they have stood the test of time and for a no-nonsense accurate medium pest control or recreational air rifle for plinking, 59 years of production cannot be wrong.

A break barrel design and spring piston propulsion is pretty standard, but this Slavia has a special little extra which contributes to its good accuracy. Underneath the barrel just in front of the barrel block is a sliding lever that is actually a barrel locking mechanism. When pulled forward it unlocks the barrel so you can cock it, and when the action is closed it ensures a positive barrel to receiver union. There is a stout black plastic o-ring seal also ensuring a good air-tight joint.

The slender barrel is 17.5 inches long with a recessed muzzle crown for protection of the rifling but is not screw cut for a sound moderator. The receiver is also slim and has twin dovetail grooves cut to its top for scope mounting and both barrel and receiver are matt blued

‘Basic’ is probably the best way to describe the stock. But it does not matter, this is a rifle to shoot and hunt with, not just look at and polish. Beech is used and has that typical matt lacquered air rifle finish with no checkering, but grip is helped however by two large grooves cut into the forend. This is quite deep as the wood drops from the receiver to the level of the trigger guard. It makes for a good hold on the Slavia. There is no cheekpiece to the butt section which is sensible as it can be used by left or right hookers. The buttpad is plastic and does its job but take care when resting the rifle against a wall/fence with the butt on slippery flooring.

The Slavia wears a decent set of open sights and is quite fun to shoot without a scope. The foresight is all metal held to the barrel with two screws to attach it to twin dovetail rails. There is a hooded post element with enough space around it for good vision. The rear sight is also all metal and has a simple notched aiming groove with elevation adjusted by a thumb wheel in the main body of the sight and windage by a small grub screw to its side.

The trigger is housed with a plastic trigger guard and is very slim and single stage in operation although it is adjustable for pull. Set at 4.5lbs it can be lightened too by loosening the screw through the trigger guard.

The safety is neat – when the Slavia is cocked a small button at the rear of the receiver pops out and the rifle is safe, just use your thumb to pop it back in when ready to shoot.

I was pleasantly surprised with the performance of the Slavia to be honest; that’s not a slight in any way, but its small size and plain looks actual hide a powerful, accurate rifle. It’s easy to cock with a small amount of effort, and although there is spring noise on compression it is not unduly twangy on firing and, in fact, after a few hundred rounds it beds in anyway.

Best energy figures went to the RWS Superpoints at a good 11.4ft/lbs and 599fps, although accuracy was only okay at 1.25 inches at 20 yards. So the RWS Hobbies at 654fps and 11.2ft/lbs would be my choice as accuracy was below an inch at 0.85 for five shots.

The FTTs also shot well at 0.95 inch groups but velocity was lower at 578fps for 10.8ft/lbs energy but still a nice all round pellet.

The Slavia struggled with the heavy pellets, as expected, as the Pest controls only managed a 471fps velocity for 8.7ft/lbs energy whilst the A.A.Diabolo Hunters at 15.8 grains produced 54fps and 10.4ft.lbs energy and group sizes of bang on an inch.

When the Salvia came out there was little in the way to compete with it really, but now the RRP has risen to over £200 and some of the Turkish contingent has stolen some of the Slavia’s would-be customers.

But it is still a very well- made design that, as the tests show, delivers good accuracy and a healthy power level. What else would you expect from CZ really?

Put on a cheap small scope and you have yourself a great little lightweight yet powerful plinker or medium range hunter that in its plain form does not matter if it gets scratched so you can concentrate on shooting.