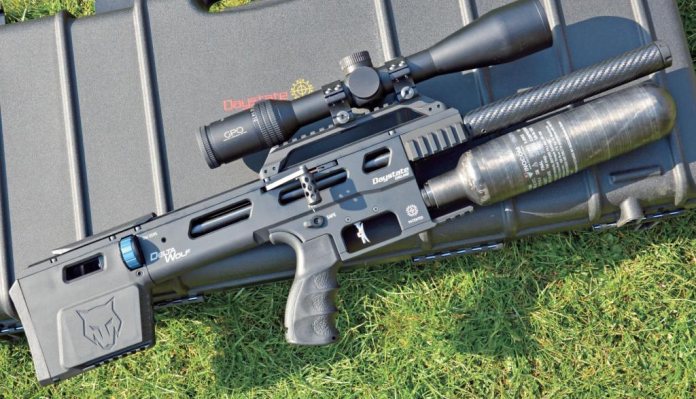 Well, I best start by stating the obvious; Daystate’s new flagship baby isn’t for everyone. I think it’s only fair, in these dark days, where social media types insist on being offended at every turn, that I issue an appropriate early warning. For traditionalists, should indeed ‘look away now’.

Evolution of the species

While several manufacturers have dabbled with electronic triggers over the years, electronic power delivery has been, and remains, the sole preserve of the Daystate brand. Since the late David Snook and his team hit the market with the rather delicious MK3, we’ve had a succession of upgrades and improvements, all offering an electronic alternative to a mechanical PCP action. This time around, and with the Pulsar project conveniently dropped from the listings, the new Delta Wolf can now sit pretty as the company’s new flagship model. It’s an important product for a variety of reasons, but we will be seeing more of its ilk, as the action that lies at its heart becomes the platform upon which future models are based. The spec sheet alone is enough to induce the odd nervous twitch or two, so I’ll start by just listing the features, then we can delve more deeply, as necessary.

With such radical styling, it’s easy to overlook the bullpup configuration, as in the action is set right back, almost to the rear of the stock. This gives a rear bias to weight distribution for starters. A large 480cc carbon fibre buddy bottle sits at the front. There’s an aluminium modular stock, with an adjustable cheek piece, variable butt plate, Picatinny style moveable ‘intermount’, four accessory rails, 2-stage fully adjustable trigger and AR15-style grip and safety. In addition to all of this, there is the option of interchangeable barrels and a longer shroud, reversible side lever cocking, brand new cassette magazine, silencer option, new Fast Flow valve system, adjustable Huma regulator and adjustable hammer option. All in a padded hard case.

First impressions are of a bold, no-nonsense design and it comes across well. Run a magnifying glass over the Delta, and it’s clear that machined components are particularly well made. So a rough burr felt on my test gun’s AR15 grip, on the lower finger groove, was just a little surprising, especially given the not inconsiderable asking price of £2400. The rear block that houses the touch screen is synthetic but well moulded and the rechargeable battery sits inside, just behind the butt. It’s accessible via a red anodized catch at the base of the butt.

Let’s deal with physical attributes first, then we can explore the dark arts that lie in wait. Charging the buddy bottle to 240bar is simple enough and the design shows a slick magnetic dust cover in the front of the trigger guard. Simply press with the finger and it flips out, then snap on the large Foster adapter supplied and the filling process can start. The clear gauge on the left shows bottle pressure.

This model comes complete with a new magazine design, which again is incredibly neat, well machined, and despite featuring on other Daystate’s, was apparently designed with this model in mind. 13 shots for the .177 on test and 11 in .22 calibre. The radical design sees the side of the casing open up to expose the chambers. Rotate the drum clockwise until it stops, and holding against spring tension, insert a pellet headfirst into the lower chamber to lock the drum. Now fill all remaining holes, close the side, and it’s ready. A small magnet is there to keep the mag in place when in use.

And so to glassware. Bullpups force the shooter to mount over the action, but in the case of the Delta Wolf, Daystate couldn’t be more helpful, with conventional dovetail rails running the full length of the modular stock, and the addition of a raiser ‘intermount’offering Picatinny mounting. The sizeable rail can slide all over, so positional options are incredible.

The modular stock, as specified, allows for the cheek and butt to be adjusted. Slacken the two grub screws in the composite cheek piece and it will slide anywhere along the top rail. The butt plate can be adjusted vertically by loosening one Allen bolt. Both stock elements are fairly basic and a little too utilitarian, given this rifle’s pedigree, but there is at least the option of a quality butt hook from PRS (Precision Rifle Systems), which would add class.

OK, so enough of the basics! It’s time to immerse ourselves in the heart and soul of the Delta Wolf. Daystate has built a worldwide fan base on the back of their innovative approach, and of course, what underpins performance here, is the electronic power delivery system known as Advanced Velocity Technology (AVT). A huge plus for many is the inclusion of an onboard chronograph, which can be used in conjunction with an LCD touch screen, allowing the user to customize features. Power level, Magazine Shot Count, Night Mode, Auto Power-Off, and Chrono On/Off, can all be set. Further commands feature in FAC variants.

To be ultra-safe, leave out the mag when trying to access the screen. First switch to ‘safe’, then pull back the side lever and leave it back. Pull and hold the trigger until the small padlock symbol disappears. You now have control. The screen acts like a swipe on a smartphone, although with slightly more resistance.

The 12 ft/lbs versions allow for power to be adjusted in 5% increments, from 70% up to 100%. Opt for the FAC version, and there is a selection of pre-set calibre specific power levels that can be activated, at the press of a button. This is arguably where this system really comes into its own. Couple that with the option to switch out the barrel and bolt, for different calibres (.25 and .30 are popular in FAC guise) and this model’s versatility begins to become apparent.

Whilst on the subject of power, the HUMA regulator is fitted and this can also be physically adjusted to suit specific scenarios. Daystate stress that the plenum chamber at 34cc is huge, again, allowing the Delta Wolf to work with specific ammunition. FAC versions will allow for the hammer pressure to be tweaked by altering the voltage sent to it.

The chronograph is neatly stowed inside the barrel shroud. The company has done this before, and this time it comes with a warning, to clean the barrel carefully, in such a way as to not disturb the internals. FPS shows in the display panel, along with reg pressure, so information is everywhere.

So, the magazine shot count can be set at the press of a button, allowing for different magazines for different calibres, or to not show at all. Night mode can be used to switch to a darker screen display - orange on black.

As the name suggests, the auto power-off setting switches things off after a certain amount of time, to save power. I thought 30 seconds would be clever, being initially slightly obsessed with battery power. But it proved infuriating. You can go right up to 1hr 30 but try 1min 30. This seemed ideal to me in normal use. Finally, the chrono can be switched off if you want.

The electronics obviously rely on a rechargeable battery and thankfully, the 3-cell lithium-polymer battery is easily charged in situ, using a USB Type-C cable plugged into the slot in the stock, and via any phone charger rated 2amp or more. Thereafter, up to 3000 shots are possible, so no real hassle.

With the AVT as well as Bluetooth enabled, it can connect to other devices, and accept future upgrades, future-proofing the system. It’s fair to say then, Daystate has clearly spent some time developing their new platform!

In standard format, the shorter barrel shroud, ending only just in front of the buddy bottle, does mean that gripping this model sees the lead hand sitting uncomfortably close to the muzzle. My advice would be to invest in the optional 0 dB silencer and kill three birds with one stone; improve safety, weight distribution, and muzzle report. Annoying that it isn’t the more common 1/2” UNF fitting, but hey.

Pull back the side bolt and this effortless motion sets the action. With the bolt rearwards, snap the magazine into its slot in the action, push the lever home and the first pellet is ready. Refreshingly, these mags can be inserted from either side of the action, and even two at once if you feel the need, doubling firepower at a stroke. With that side-lever switchable to the other side, versatility is just everywhere you look.

If you’ve never fired an electronic action, it’s a unique experience, and this Delta, whilst firstly fairly noisy in standard form, also delivers a curious ‘KaTok’ as the solenoid dictates play. The fully adjustable trigger is hard to fault, and with that comfortable blade able to move where desired, and a final electronic release fairly effortless, it’s a pleasant experience.

Leave the rifle for a while and the ‘auto-off’’ feature eventually kicks in, with its own whirring sound. It’s all very clever, aimed at a certain sector of the market. For those who wish to just turn up and shoot, then the full potential of what the Delta offers is unlikely to be realized. However, if you are someone who likes to play with settings, experiment, and fine tweak performance, then the Delta Wolf opens up a world of possibilities.

Shot count is massive with that bottle in tow, (approximately 400 in .177, and 450 in .22 calibre) and my first 100 shots returned a total spread of just 21 FPS, with pellets straight from the tin. 3/8” c-t-c clusters over 40 yards using Rangemaster Sovereign pellets told me all I needed to know, and if more time was spent on ammo prep and selection, I would expect to close those groups still further. Pretty textbook then.

When compared to the competition, the Delta Wolf still holds trump cards, for originality, at the very least. For no other manufacturer currently offers electronically managed power delivery, and with the next generation AVT system and touch screen functionality offering a wealth of options, lovers of clever technology have plenty to get excited about. The manufacturers market this model as ‘a tactical air rifle for the technical shooter’, and that does just about sum it up.

It was of course Daystate that brought the pre-charged pneumatic into the modern era and this new flagship model, with its cutting edge, patented electronic wizardry, ensures this groundbreaking brand maintains its unique position in an ever-competitive market place. Whether it warrants that eye-watering price will always be a matter of conjecture and individual opinion, but the Delta Wolf is an amazing airgun and an astonishing achievement for sure.

So, it just remains to thank Range & Country Shooting Supplies in Sleaford (the only Premier Daystate dealer in Lincolnshire) for the kind loan of the test rifle.