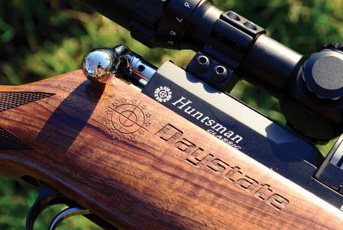 Tranquilliser guns… riot control equipment… one of the first companies to make a modern pre-charged pneumatic (PCP) rifle…  Daystate’s history has indeed been a varied one! Take a look at their Staffordshire based operation these days though, and there seems an air of confidence and focus about the place. Sales Director, Tony Belas has no doubt played a big part in this famous company’s metamorphosis, and his energy and sheer enthusiasm for the brand has seen it continue to evolve; to become the quality player that we see today.

In Daystate rifles, bold styling, chunky components and a robust finish, all come together, and the result is a range of products that are distinctive to say the least.

One model name which has been included in the line-up, almost from the off, is the good old Huntsman, and the current incarnation is an exercise in modern manufacturing techniques.

Italian influence is of course creeping into the equation these days, as Marocchi, the company’s owners seek to make their mark; and the sheer quality of the model submitted for test here, was immensely impressive. Mouth watering woodwork from another Italian company - stock maker Minelli - makes a statement, whilst the latest Classic action is a perfect compliment. Daystate made no secret of their intention to style the modern Huntsman on a live ammo cartridge rifle format on its inception, and the result is a slick looking tool, aimed fairly and squarely at the hunting fraternity.

The action is set deliberately low in the woodwork, which works well, but I’m pleased that the company has dropped the idea of the brown finish to the main cylinder- presumably due to an army of fans with similar views to mine!

Given Daystate’s world renown for their electronically managed airguns, this is a good time to point out that the Huntsman is a purely mechanical model, which for me, doesn’t detract in the slightest. Let’s face it, the electronic wizardry is astonishingly clever, but to some of us, just a little too clever by half. Reliable mechanical systems have proved they can still perform to the highest level, and this model is indeed proof positive, as we shall see.

Multi shot designs have great appeal to the hunter too, and to this end, the Huntsman comes fitted with a ten shot magazine

Before we get down to the nitty gritty, a quick once over of the basics is in order. As mentioned, the Huntsman comes fitted with a finely crafted walnut sporter stock, offering a dedicated right hand configuration; including a beautiful, palm filling grip, rosewood cap, and a generous thumb shelf to the rear. A welcome feature of the right hand bias, is that rather tasteful roll over comb on the reverse side of the cheek piece, whilst a highly attractive English style rubber butt pad adds a further touch of class.

Supremely well executed (and for that read perfect) laser cut chequering, adorns both the pistol grip and fore-end, set off nicely with a subtle Minelli logo in the grip. Overall then, a superb piece of woodwork, only marred by the slightly vague look to the fore-end tip.

Signing up specialist designers along the way has been a successful move for Daystate, and extensive work carried out by Steve Harper has paid dividends in many areas. Steve’s ‘Harper patent slingshot hammer and valve system’ now sits at the heart of the modern Huntsman’s internal mechanism, which allows for an impressive shot count, and remarkably good consistency, as we shall see.

Daystate’s trade mark chunky bolt, tab safety, and near bomb proof breech block assembly, add reassurance to the set up, whilst the usual robust satin finish to all the metalwork, affords great protection and looks good at the same time.

The quality Lothar Walthar barrel is fitted with a full length shroud, and whilst it is indeed threaded at the muzzle to take one of the company’s dedicated silencers, to fit one would in my view, unsettle the aesthetics. Of course if serious hunting projects should arise, then the modest report could be tamed to a mere whisper, by removing the knurled threaded cap and adding a moderator. Until then, resist the temptation!

This model, in keeping with others in the range, offers the now standard set-up from Daystate, whereby a ten shot magazine is supplied, but a single shot tray can be easily fitted in seconds, if deemed preferable (often chosen for HFT use). A muti-shot magazine will almost always be the hunter’s choice, and this ten shot rotary version from Daystate has undergone several revisions over the years, with the latest spec being a nicely made cassette design.

To remove, first pull back the bolt handle until the hammer mechanism is cocked, then slide the magazine from the action.

Push a pellet head first into each chamber in turn, twisting the drum one turn anti-clockwise at each stage. The fact that the drum only turns in one direction is a little irritating, but overall, it’s a well made unit, that works well. Adopt a positive solid approach to cycling the bolt though, as slightly half hearted attempts can result in a second pellet being chambered.

Obviously any pre-charged pneumatic first requires an intake of air, and here a little confusion arose. Daystate’s latest product brochure specifies a fill pressure for the Huntsman as 230bar, but a good rule of thumb with this company’s products, is to be guided by the small disc fixed to the side of the breech block, which specifies that particular rifle’s required fill pressure, applied at the time of that particular rifle’s manufacture. In the case of my test gun, the disc specified 200bar, so that’s what it got.

Daystate fit a pressure gauge to the Huntsman, which is obviously a great feature, allowing as it does, the user to keep tabs on residual air supplies. Nothing could be more frustrating than running out of air, so being able to strategically refill as and when necessary, is fairly fundamental with PCP’s in general. However, in the case of the Huntsman, given the truly fantastic quality and craftsmanship in the rifle, one can’t help but note that the gauge itself is rather cheap looking.

Out on the range, the first stop was the chronograph, to ascertain total number of shots to be expected from this latest specimen, and whilst I’ve tested several examples of Daystate over the years, it’s always fascinating to gauge any subtle improvements to efficiency. With the manufacturers still claiming a shot count of 60 from a 12ft/lbs .177 model (my test spec), I was amazed to clock 100 shots, all within 22fps – so a somewhat conservative estimate on their part!

Accuracy wise, using Daystate’s own Rangemaster Li branded pellets, easy sub half inch groups began to form at 35 yds. Yet anyone who appreciates just how potent these rifles can be would expect just a little more, so the ubiquitous JSB pellets in the form of Air Arms Diabolo Field’s just had to make an appearance. Whilst one particular rile, for whatever reason, may favour a particular pellet, another example of the very same gun, will quite possibly favour a different diet.

For the record, the JSB’s closed the groups down to genuine quarter inch clusters, which showed at a stroke, just why Daystate have featured so highly in HFT competitions for example.

It should be noted that the silky smooth 2-stage trigger not only looks supremely graceful, but given its perfectly flat, broad blade, and nicely weighted mechanism, it just has to be a contributory factor in the superb down range performance.

So there we have it, and what more could you ask for, from one of the originators of the modern pre-charged pneumatic (PCP) system?

Blistering accuracy, and a fantastic level of specification neatly sums up Daystate’s Huntsman Classic. For serious hunting, or even HFT, this is surely one of the tastiest and most capable sporting rifles around. GM