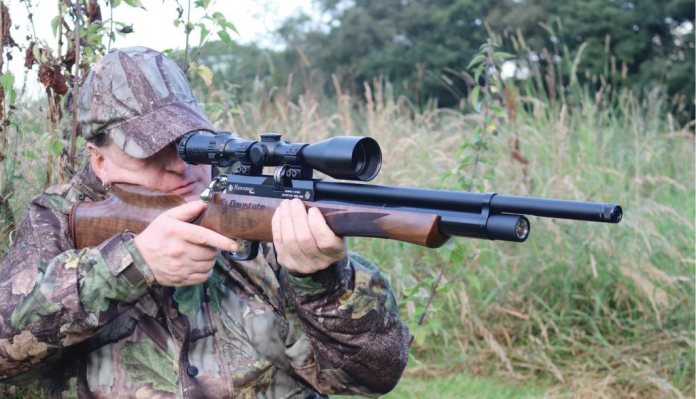 Despite their electronic ‘superguns’ and continued technological advancements, many still feel the Huntsman Regal is the finest airgun that Daystate has ever made. Regal by name and certainly regal by nature, the Huntsman has now progressed because as you can see by the HR denotation, it’s now available with a regulated action. However, the HR is fitted with not just any old reg but one manufactured by Dutch pneumatic specialists Huma. Their regulators are currently being hailed as amongst the best you can fit to a PCP and quite frankly if Daystate has outsourced this component to another company, I think you can safely say they must be a bit special.

In an age when ambidextrous furniture is now seen as the norm, the Huntsman’s stock stands out from the crowd due to its highly ergonomic, stylish and very cosmetically appealing lines. The high-grade walnut stock features a medium height, right-hand roll over cheekpiece and a slim ventilated brown rubber buttpad, which is complemented and finished with a black line spacer.

The very slim neck has a well-positioned thumb channel running up the right-hand side of it, which broadens out progressively as it reaches the top. The steep drop-down pistol grip has quite a generous palm swell which is finished at the base with a rosewood end cap and contrasting maple spacer. The slim forend has a nicely rounded underside that sweeps upwards in a gentle inward curve to slightly flare out as it meets the semi-Schnabel tip.

Both grip and forend show twin contrasting panels of very aggressive chequering that have been given a very dark (almost black) oiled finish, giving the rifle even more of an attractive overall look.

Even the underside has a full-length panel of identical chequering which really does give the Huntsman an unprecedented level of grip!

All in all, the furniture is extremely ergonomic, giving superb handling and balance. It allows the rifle to come quickly up to the shoulder and when there, it sits solidly in the aim.

A recommended charge of 230bar returns 140 shots in .177 and 160 in .22 calibre. Those familiar with the Huntsman will know this is a massive increase in the shot count, but that’s where we come to the reason air regulators are fitted to air rifles – they make them more efficient. To put it a better way, they allow the stored air to be metred out precisely, so none of it is wasted. In addition to this, the HR Regal also uses the Harper slingshot hammer system. This is a highly effective and now time tested design that negates hammer bounce so that even less air is wasted during the firing cycle.

This nicely brings me to the fact there are two air gauges on the rifle, one is set into the underside of the stock while the other is a forward-facing manometer positioned on the very front of the air reservoir. The former is to keep check of the regulator’s working pressure while the latter, of course, indicates the air status in the reservoir.

Incidentally, due to the addition of the regulator and the fact the main air gauge has been moved to the front, the HR model doesn’t use the standard Foster connector that Daystate have used for aeons. Instead, the rifle is charged via a familiar-looking probe that slips into a side fill point. When not in use, this is covered by an integral rotating front metal collar.

The airgun has a generously sized, ball ended, stainless steel bolt that runs the company’s latest 10- shot, auto-indexing rotary magazine. I say ‘latest’ as this mag unit has been heavily developed over the years, making it one of the most precise on the market. It works faultlessly as it fulfils its role in the loading cycle. It is held in position by magnets and once the bolt is pulled fully rearward, it slides out from the left of the action. The design allows the user to change which side of the action to fit the mag by simply moving the position of its stop pin. The rifle is also supplied with a stainless steel single-shot tray that is also secured in position using magnets - and yes - there are hunters amongst us who prefer to load pellets manually. The Regal is an all-round performer, so the tray is of major use for any HFT competitor who chooses this rifle.

As you can clearly see, Daystate, like Air Arms, have stayed true to the barrel over reservoir design for many years, and why not? It’s a basic but very simple layout that works very well. The semi free-floating, match-grade Lothar Walther barrel is fully shrouded and is strengthened by a sturdy looking barrel band. It is worth noting the shroud markedly reduces muzzle report, but like the majority of hunters, I prefer a very quiet air rifle. I would recommend spinning a sound moderator of your choice onto the screw-cut ½” UNF muzzle threads.

The 2-stage adjustable trigger has a highly polished alloy blade with a well-formed inward curve and relativity broad front face. It sits ideally positioned in the middle of the contrasting black alloy guard where it’s easily met by the trigger finger due to the configuration and angle of the stylish pistol grip. The unit also has a manual safely lever positioned at the rear. These used to be made of a clear plastic acrylic type material but on the latest models, they show a much more substantial looking red colour. The new catch is a good size and is positioned so that it can be easily thumbed on/ off without removing or adjusting your hold on the grip. If you prefer to adopt the thumbs up shooting hold, then you will really appreciate the well-crafted and proportioned thumb channel.

Although the magazine extends above the dovetails of the action, I was able to easily fit a low slung MTC 3-12x44 Mamba-lite scope in a set of medium height, two-piece Sportsmatch mounts. I chose this optic because not only did I not want to over-scope or overburden the rifle, but I also wanted to maintain the rifle’s superb handling and balance. Setting a 25-yard zero and shooting from a rested position, I was able to produce some very tight cloverleaf groups with the .22 calibre test rifle. These only slightly widened into ragged ½” clusters when pushed right out to 40-yards.

Now for data devotees, and as I’ve never before had the chance to experience a Huma regulator, I decided to see what the chrono registered. I used the recommended 15.93-grain Daystate Rangemaster Sovereign .22 pellets and the rifle achieved an average muzzle energy of 11.5 ft/lbs with a shot-to-shot variation of 14fps over a string of 60 shots.

The contemporary Huntsman Regal in standard format maintains all the features airgunners have come to expect from a PCP bearing the famous Daystate marque; from its shrouded match-grade barrel to its solid action that accepts Daystate’s proven 10-shot rotary magazine. Let’s also remember, as stated earlier, it can easily be replaced with the supplied single-shot tray for direct barrel loading if preferred. Courtesy of its Harper slingshot hammer and valve system, the Huntsman is capable of performance levels that up until now, were unachievable in a mechanically-driven PCP.

The higher power versions in the Regal line show muzzle energies of up to 30 or 40 ft/lbs. Incorporating an air regulator designed in collaboration with Dutch pneumatic specialist Huma may seem as if the company are just keeping up with current trends but the HR model improves the Regal’s already consistent velocity. It also extends its shots-per-charge by up to 70%. So, you could say - in fact, you can say - that the Daystate Huntsman HR Regal is more than worthy of taking its rightful place to bear and continue this now-classic air rifle’s right royal heritage. Thanks to T & J. J McAvoy LTD for supplying the airgun.