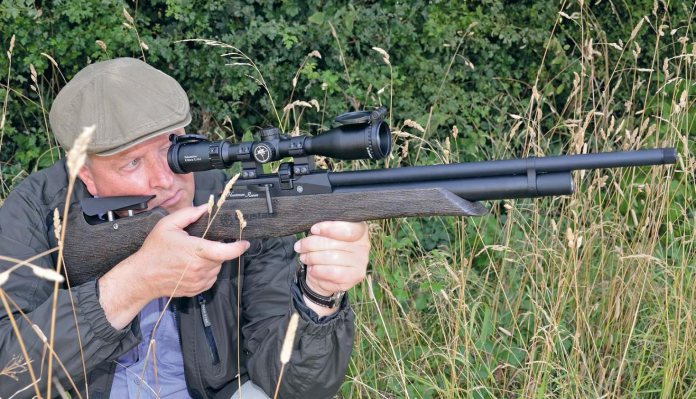 I think we can safely say that Daystate’s Huntsman has had a successful production run in one guise or another, and for traditionalists that really don’t want electronics to be a feature of an airgun, it remains a go-to model in Daystate’s line-up. As the name suggests, the Huntsman is predominantly a hunting machine, aimed at shooters who appreciate the practical matte black non-reflective finish, lightweight action overall and quality build. The Revere specification, switching from a bolt to a side-lever, was an inspired move, and this alone has given Daystate’s favourite sporter a new lease of life.

Now though, the choice just got harder, as Daystate has launched the Huntsman Revere Safari Edition. It’s a model I’m reliably informed is now a permanent inclusion in the line-up, despite sounding like another of their specials. As usual, with Daystate, you can get FAC power on ticket in .25 calibre, or opt for 12 ft/lbs in .177 or .22, and on test here is the UK spec, .177 12 ft/lbs version.

Wood you believe it?

Daystate has used the Safaristyle woodwork on their popular Red Wolf rifle, but up until now, I hadn’t appreciated just how different the medium used is. I have to say, on opening the protective box, I was underwhelmed. The curious production method leaves a scratched surface to the wood, and with that dark finish applied, plus the fact that I was actually left with a grubby residue on my hands after the first session out, I was really in two minds about the whole project. So, first impressions of this new Huntsman for me - decidedly mixed.

Tapping the sides of the forend, there’s a small amount of resonance, which set me thinking - was this even wood, as it felt quite ‘plasticky’ up front? But a quick call to Tony Belas at Daystate confirmed that it was indeed timber, and the result of a unique wood removal process that leaves that distinctive roughed-up look. ‘Raised Grain’ is what they call it, and with the addition of panels of stippling around the pistol grip, and three more panels on the underside of the forend, there’s certainly plenty of grip!

Get past the enhanced handling and dramatic visuals, and the key feature is of course that adjustable cheekpiece. It contrasts nicely with the stock as it gets treated to a soft touch rubberized skin, whilst the black rubber butt pad is suitably soft but sadly non-adjustable.

Elsewhere, and in terms of the action, all the features of the Huntsman Revere are transferred over, and that, believe me, is a good thing. The action is Huma regulated, there’s a full-length shrouded barrel, the muzzle is screwcut (1/2” UNF), there’s a 2-stage trigger, 2x manometers, new style magazine, single-shot tray, filling adaptor, rocker style manual safety catch and a side-lever action.

Before I forget, a point worth mentioning is that all Daystate airguns are now ambidextrous and have switchable side-levers, which is actually a brilliant feature.

Charging the cylinder is straightforward. Attach the supplied probe adaptor to the airline, then insert it into the inlet valve, to be found beneath the revolving dust cover. Unsure of the fill pressure? Then don’t be, as Daystate obliges with the figure confirmed on a small disc located on the right side of the receiver. 250bar in the case of my test rifle, and if you use Best Fitting’s Quick Coupler ends on the adaptor, the whole process is civilized and easy.

Daystate is renowned for bold engineering, which unsurprisingly includes very positive dovetail rails running on top of the receiver. Fitting a scope is therefore a piece of cake with the appropriate mounts, but since my test rifle had been supplied ready to go, with an MTC Mamba Ultra Lite 3-10x40, already fixed in place, I just needed to quickly check the zero. Be aware though, the new mags are quite tall, so higher mounts are required.

Final piece of prep - filling the mag. All Huntsmans now come supplied with the new gate style of magazine, and this all-metal design feels well made, but at this stage, I do have to highlight a slight problem on test. This concerns Daystate’s use of small magnets - firstly to pull the magazine into place within the action housing, and secondly, to keep the side of the new style gate up and closed. On test, the latter magnet, recessed in the inside centre of the gate, fell out and would not stick back in place.

Two points here. Firstly, the magazine’s operation was still faultless (without that magnet), once inserted into the action, and secondly, having tested many Daystate airguns, I haven’t experienced this fault before, and I’m sure if you were unlucky enough to get the same, the company would replace or fix it in a jiffy.

Niggle aside, the new mags hold more pellets, offering 13-shots in .177 calibre (tested), 11- shots in .22 and 10-shots in .25. To fill the mag, first pull down the front hinged ‘gate’, then twist the drum clockwise against spring pressure. Keeping hold, drop the first pellet head-first into the central bottom hole, and this will lock the drum. Fill all chambers, shut the front of the casing, and the job’s a goodun.

Well, I’m pleased to say that the second time out, grubby hands were no longer an issue (presumably the residue from Minelli’s production process had worn off), and I could settle down to appreciate what this Safari Edition has to offer. I was also aware that my feelings towards it were genuinely changing. For me, the shape of this stock is infinitely better than the Walnut configuration, with that flared, swollen forend, complete with angular tip, it’s a more mature design all round. Aesthetically, it looks the part with a purposeful profile, but also in practical terms, it feels great in the aim.

Daystate has always included a quality trigger on their rifles, and this Huntsman is no different. The mechanical 2-stage unit has plenty of adjustment for first and second-stage sear release, and this refinement is compounded with the inclusion of that near perfectly shaped blade. The broad, flat surface and setback configuration all add to the final feel, and overall it’s a quality setup. Fancy a tweak? Then check out the comprehensive manual supplied.

Pulling back the side-lever requires almost no effort to break away from the retaining magnet and get to 90º. At this point, just a small pull back and the hammer is cocked, the magazine indexed for the next shot, and the trigger set. The subtlety of design and refined execution just instils confidence, and this was born out with the range card.

As mentioned, this Huntsman features twin manometers, with the one up front (not an ideal position) giving the residual pressure of the main cylinder, whilst the one situated under the forend shows the pressure of the Dutch-made Huma regulator. My test gun showed the reg sitting at 95bar, and over the chronograph, this Safari Edition proved one of the most consistent airguns I have tested recently. Daystate, for the record, claims shot counts in the region of 140 in .177 and 160 in .22.

On test, my .177 produced 153 shots using BSA Goldstar pellets, with a total velocity spread of just 13fps, which in anyone’s book, is quite superb. Accuracy was equally impressive, and all importantly, easy to come by. The ragged, super-tight clusters over the initial 30 yards were expected from such pedigree hardware. Nonetheless, it’s still satisfying to see those miniature groups forming. Moving back to a truer test of 40 yards, groups were still only a little larger than 1/4” c-t-c. In short, I was left with the impression that this high-grade gun was inherently accurate, and pretty well up to any task asked of it.

Opt for walnut on the standard Revere, and you get simply one of the most mouthwatering gunstocks fitted to any airgun. The quality and finish are shotgungrade, and quite stunning in their subtlety of design and meticulous execution.

To dismiss all that and go for the Safari Edition is therefore a big step. However, for those who fret about taking a gun into the field and scratching the walnut, this is clearly the route to take, and the improved ergonomics and handling that come as part of this new package will only improve results. It has certainly won me over and having now spent some time with this rifle, evaluating and assessing just what it offers the serious hunter or HFT enthusiast, I can honestly say it’s a great addition to Daystate’s catalogue, offering top-class technical performance in a radical but highly practical format. Plus, there’s not a solenoid in sight!