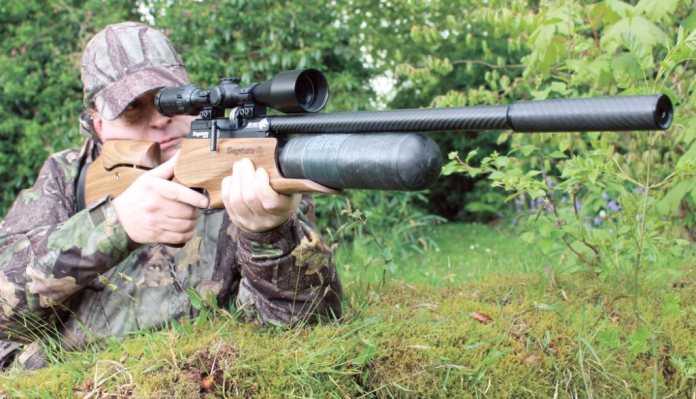 When it comes to advancements in air rifle technology, Daystate are surely one of the first names that will be very high on the list. In more recent times, this famous UK airgun manufacturer have pushed the boundaries with both electronically operated airguns and hi-power FAC rated models. However, when you think that the age of the electronic supergun has peaked, the company still enthral and grab our attention with new models of differing design. Quite a long-winded introduction but one I feel fitting for the gun here on test; the Daystate Red Wolf Hi-Lite.

As many will know, the rifle first appeared as the Limited-Edition Serie Rosso in a very high-gloss red and grey laminate stock, there was even red engraving on the action block; to some, this was a true beauty in many ways.

Now in full production, there’s now no less than 3 variants and two stock options (Turkish Walnut or Black Laminate) to choose from; while the rifles choices are denoted as Red Wolf B Type, Red Wolf Hi-Lite (as on test) and the dedicated FAC model, the Red Wolf Hi-Lite HP. While the B Type can be purchased with either a 400 or 500cc buddy bottle, the Hi-Lite features a carbon fibre 480cc bottle; this helps it shed weight and is very cosmetically appealing.

All stock options are the same design and, as you can see, the test rifle bears the ambidextrous, high-quality Turkish walnut furniture. It’s an undeniably striking and very ergonomic, well-crafted design with bold sweeps, curves and recesses, plus a nicely configured grain pattern shows through the hunter-friendly, semi matte finish. It features a height adjustable cheekpiece, as well as a height and angle adjustable, full rubber butt pad. These features allow you to tailor it to your personal build for a nigh on perfect fit at the shoulder and eye-scope alignment.

Incidentally, the cheekpiece is set on two stainless steel posts, adjustment being made by loosening the recessed Allen head screw that’s set into on the right-hand side of the stock. The neck is quite slim with a slight thumbshelf, while the grip has forward finger ridging plus stippling and ends with a black ABS cap. The forend is quite chunky with a recessed, fluted channel at the lower section, just before it morphs into its nicely rounded underside. The front of the stock sensibly extends under the buddy bottle, so that you not only always have wood to hold but there’s enough ‘stock’ should you want to fit sling swivel studs. The fill point in the underside of the stock is neatly covered by a magnetic cover. When removed, you see the company’s familiar bayonet fill adaptor and it’s rated as taking a fill pressure of up to 250-bar. Many Daystate fans will possibly charge this a tad lower, but even at 210-220-bar (which I chose) you can expect to get 475 shots in .22 calibre, as per the rifle on test and Daystate claim you’ll get a return of 420 in .177.

Now, it’s here that I need say the heart and soul of this gun is what is termed as its Mapped Compensation Technology (MCT). This means a digital microprocessor and solenoidpowered air valve monitor and control every nanosecond of the firing cycle. This ensures an incredible shot-to-shot consistency, increased shots per charge and reduced action movement. It also adjusts the valve to be in harmony with the air pressure; in effect, you have a digital air regulator.

The LCD display screen is built into the left of the stock and clearly lets you keep an eye on your air pressure, but that’s not all the electronic wizardry that’s at your disposal. If you open the sidelever, holding in the trigger allows you to access and toggle through the various modes offered. You can set to show shot count, change power from high (Hi Pwr) to medium or low and when the internal battery is running down, as well as an audible ‘bleep’ you can set it to give visual indication that it’s time to give it a boost. This entails removing the battery, which is housed in the pistol grip (hence the ABS end cap) and simply using the charging unit supplied to recharge it.

In multi-shot guise (a single-shot tray is included with the rifle though) a smooth operating, Biathlon style sidelever runs the company’s latest 10-shot auto-indexing rotary magazine. I say ‘latest’, as this magazine unit has been highly developed over the years, to the point that it’s one of the most precise, working faultlessly as it fulfils its role in the loading cycle. With the sidelever pulled back, the magazine slides out from the left of the action, where it’s held in place by magnets. A nice feature on these magazines is you can change which side of the action you prefer to load the magazine, by simply moving the position of its stop pin.

Incidentally, the sidelever can be fitted to the left or the right by the factory, making the Wolf truly ambidextrous.

Although the magazine extends above the dovetails of the action, I was able to easily fit a low slung MTC 3-12 X 44 Mamba-lite in a set of medium height, two-piece Sportsmatch mounts. I chose this scope, as I didn’t want to pile on the pounds, so to speak, and in use it suited the rifle very well indeed. Setting a 30-yard zero and shooting from a rested position I was able to make ragged, pellet-sized groups that only slightly widened into ½-inch clusters, even when I pushed right out to 50-yards.

There’s no getting away from the electrics when it comes to taking a shot, as I’m sure it hardly needs stipulating but the 2-stage adjustable trigger releases shots electronically. So, due to the trigger having no mechanical connections, to be perfectly blunt, the trigger is ‘simply’ a switch. Some shooters set these far too light, which is a no-no for hunting; so, if you do alter the factory settings (which I found to my liking) be sensible.

Now, any trigger unit needs a blade and, in this case, it’s a stainless-steel post and shoe style. The post can even be adjusted back or forward, and the well curved, broad faced shoe can be adjusted for angle aspect and height. The unit’s ‘electronic release’ is adjustable for pull weight and length of stage. In use, it clinically releases the shot as you operate the blade and the firing cycle is best described as ‘dead.’ Also, due to the internal electronic wizardry, the rifle has a very fast lock time, which all helps up the level of accuracy the rifle is capable of.

The Wolf is also fitted with a manual trigger safety, ideally positioned at the rear of the action for operating with the thumb of your shooting hand. It’s a slide catch design that you slip over to the left to engage and over to the right to disengage. A trait of this rifle is that it turns itself off after approximately two-minute sif not used in any way. I presume this is to conserve the battery but it’s something to be mindful off when hunting or you could just be onto a dead cert ‘sitter’ of a shot and you’re holding an inoperable rifle. To ‘reactive’ the gun, you need to either thumb the safety on/off and on again or operate the side-lever; and yes, you can do this as there’s a mechanism integrated into the rifle that prevents double-loading.

The free-floating Lothar Walther tube is fully shrouded by a very stylish carbon fibre sleeve, which in itself does slightly mute muzzle report. However, I’d advise hunters to make use of the threads at the front of the shroud; these are covered by a knurled, screw on protector. For test, I spun this off and fitted one of Daystate’s reflex Airstream cans; not only suiting the cosmetics of the shroud but also it further helped reduce muzzle report to a more acceptable level.

The Daystate Red Wolf is lauded by its manufacturers as ‘holding the mantle for the most advanced PCP sporter in the world.’ Some claim! However, it’s hard to dispute because this really is an electronic super-airgun and that’s taking into consideration the highly crafted ergonomic luxury stock, faultless operating action to the hi-tech internals, precision manufacture and of course the stunning performance. Another feature that needs highlighting, is the noticeable reduction in weight, as although it may look quite substantial, it doesn’t feel heavy at all in the hold, where it also displays superb balance and handling.

Now, I can’t get away without mentioning the Red Wolf Hi-Lite has price tag of nigh on two grand. Ouch! However, this is the pinnacle of air rifle technology and, like all things in life, you have to pay if you want such a luxury class item. If you can afford it, it’ll be a gun that you’ll certainly treasure and one that will serve you impeccably in any shooting situation you may find yourself in. There’s more, though, because to celebrate the company’s 40th Anniversary, it’s also now available dressed in a striking blue laminate stock.