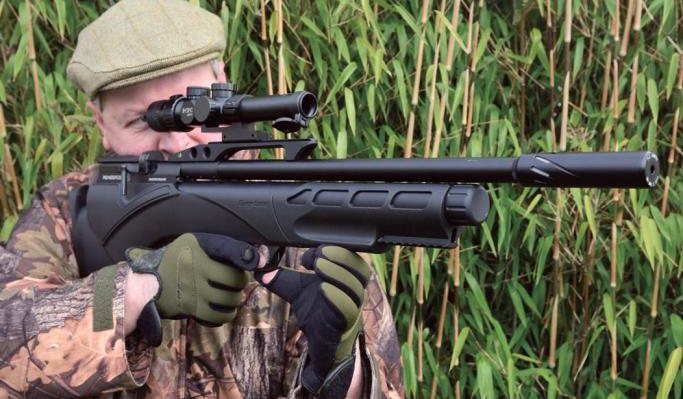 Daystate were, of course, the pioneers of the modern precharged pneumatic; from the cottage industry in the 70s through to the groundbreaking MK3 electronic model, released somewhere around 2003/2006. Whilst a host of other manufacturers have now trod the route of the familiar PCP layout, this most forward thinking of manufacturers continues to surprise and innovate like no other, as their boffins exercise their uncanny knack for staying one step ahead. You want radical? Well with Daystate, we get it!

Admittedly, the company’s eye-popping Pulsar wasn’t exactly the first bullpup (where the action sits to the rear) airgun on the market, but the way Daystate approached the concept, with their customary flair, all but stopped traffic in mid-Staffs! Fifth-generation electronics, in the form of their refined GCU system powering the action, an electronic trigger, and a laser fitted as standard under the forend, all in a super compact bullpup platform, was all undeniably clever and cutting edge- but maybe just a step too far for some.

There’s an army of enthusiasts that clearly love bullpups, however, (just look at the number of manufacturers jumping on the bandwagon of late) yet still get slightly twitchy at the thought of a PCP that’s fully electronic. And personally, I’m not sure about the Pulsar’s on-board laser either! But those nice chaps at the factory aren’t stupid; they know all this. And it’s with one eye on the more conservative rebels among us, that led them to their next cunning move. The ‘Big Secret’, was how Daystate’s marketing whispered the arrival of the Renegade, and of course it makes perfect sense – a rifle that looks and largely feels just like the Pulsar, but with a conventional, mechanical action, in place of all that GCU business! But it’s not quite that simple, as the Renegade is also labelled a hybrid, due to the trigger being part mechanical, and part electronic.

Take a look at this model, and the features start to jump out; with the most striking being that stock, formed from ballistic nylon, complete with rubber touch coating in places. An adjustable buttpad sits to the rear, whilst an accessory rail is part of the moulding on the forend. There’s the two-stage, hybrid, semi-match trigger, manual safety, side lever action, 10-shot magazine, shrouded barrel, raised scope rail, and threaded muzzle for a silencer. Quite a specification then!

Look closely and the ballistic nylon stock is made in sections with the front forend panel sporting a slightly rougher, more textured feel, and the rear butt section a soft touch rubberised coating. The dropdown grip has finger definition moulded in, and whilst fully ambidextrous, the feel is very pleasing overall. Take a look around at some rival bullpups on the market at the moment, and you’ll be amazed to see some with no cheekpiece/ support over the breech area at all. No such stark set-up here, as Daystate fit the Renegade with a slick little cheekpiece panel, again ballistic nylon, that sits just behind the magazine. It’s a neat fitting too, via Allen screws from the top.

My test gun was supplied as seen, in black, but it also comes in green, and that version sports contrasting black inserts inside those near triangular sections each side of the butt. Build quality is typical Daystate, and for that read precision engineering, coupled with their trademark robust matt anti-glare, anti-corrosion finish to the metalwork. That mechanical action utilises the company’s tried and tested Harper patented ‘Slingshot’hammer system, as fitted to the Wolverine and Huntsman Regal models, so we are talking pedigree here.

Further reassurance comes with the standard Foster-style valve at the front of the chunky 300cc cylinder. Just spin off the wonderfully positive valve cover, snap on the airline, charge to 220-bar, and the system is primed. Fitting glassware is the next consideration, and in that regard, the Renegade comes fitted with a large raised mounting rail, which even incorporates a spirit level bubble at the rear. The configuration of most bullpups dictates a fairly high sight line, and whilst this may be irritating for some, once trajectories are learned, it will become largely academic to many. The spirit level will help keep cant out of the equation too. Daystate had also fitted my test gun with an MTC Connect, and this is perhaps the ideal choice, given the Connect’s own compact dimensions, and close quarter operating requirements.

Externally, the Renegade mirrors that of the Pulsar, save for the absence of any display screen, and that includes the slick side-lever and 10-shot rotary cassette magazine. To load the mag, pull back the side lever, cocking the action in the process, pull the mag clear from the left side, and chamber pellets in turn into the bottom, enlarged chamber, rotate the drum and fill every chamber in turn, then return the mag to the action, and close the lever, which loads the first shot. Subsequent working of the lever is all that’s required, and the Renegade cycles both quickly and smoothly.

Dodgy, creepy triggers are to be expected on bullpup rifles of old, due to the remote linkage normally required given the action set so far rearwards. Which is why Daystate’s inspired ‘hybrid’ approach is so refreshing. Powered by a single conventional 9v battery, the HTU (Hybrid Trigger Unit) releases normal functioning sears via a wire linked to a solenoid, with the end result just a crisp, drag-free release.

Add to that, enhanced safety given that the power from the battery is cut to the trigger, as the gun is cocked, and what we seem to have is a high-tech solution to an age-old problem.

My test gun came courtesy of the factory directly, and top man Tony Belas had seen fit to send it through with one of their Belita silencers – basically a mini Hugget design, and it’s an exquisite exercise in engineering if ever I saw one! It’s an optional extra here, for another £76, but there’s no question it looks the part, and I’d recommend it. Unless your reason for taking the bullpup route is for absolute compactness; in which case, be safe in the knowledge that the fully shrouded barrel significantly tames any muzzle crack as standard. Won’t look as good though!

Chrono check first, and from the 220-bar fill pressure, I clocked 120 shots with a spread of just 24fps, and a full 225 shots with 31fps total spread. A pretty impressive start then. “So how does it handle?” I hear you scream. Well, no thorough test would be valid without assessing raw accuracy, from a rest first – and here, the Renegade recorded quarter inch groups c-t-c over 30-yards, and not much bigger (5/16- inch) over 35-yards, which is excellent obviously. Bullpups are very individual, and the balance is very particular, given the action sitting at the back. My Renegade, fitted with the Connect on test, was perfectly balanced right on the pistol grip, which gives you some idea. I deliberately gauged feel from both the standing and kneeling positions, with this in mind, and the results were interesting.

Standing was as I would expect, because I need a lot of weight at the front, and I felt a little unsteady. I still managed a spread of 1.3-inches at 30-yards, but had some lateral waver to contend with. From the kneeling position, I had four shots in a clover leaf, and one slightly further, coverable by a 5p. Great stuff, but these are guns to try before you buy. Do note also, that the side-lever, cheekpiece and magazine, can all be switched to the other side, so lefties are well catered for.

In short, it’s difficult not to be impressed with the Renegade, and it helps Daystate maintain their position as perhaps the most radical designers currently in the business. I’m still not comfortable with a magazine/breech so near my face from any bullpup, and it’s a common theme across the market; but that observation aside, love ‘em or loathe ‘em, there’s some clever, even radical, design work going on here, that just can’t be ignored.

The Renegade is the perfect high-quality choice for lovers of the bullpup concept, that don’t quite want to take the leap of faith to full-on electronically delivered power. A mechanical action, and that hybrid trigger- now that’s more like it! Extremely well made, with predictable Daystate performance to match.