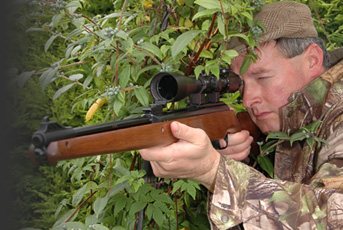 Stutzen air rifles are based on Continental fashioned hunting rifles with long fore-ends, and as such are a matter of personal taste for sure, but whatever your take on this most distinctive of designs, there’s no doubting that full length woodwork helps to disguise the mechanics, resulting in clean lines and an ultra slick profile.

As someone who purchased one of the special edition Stutzen stocked Centennial BSA Airsporters, back in the ‘80’s, I clearly have mixed feelings on the subject, since that particular model never quite lived up to the hype - somewhat colouring my judgement in the process. Classic Stutzen styling though always seems to lend a Teutonic air, and where I came to regard its use as simply out of place on the BSA, it’s surely natural territory for the likes of Mayor Grammlespacher (the German makers of Diana airguns).

As one of the leading airgun brands, with something of an illustrious history, it makes perfect sense that this German giant should include a Stutzen in their product line-up, and this fairly new model 430 is a fine example of their craft.

Playing to the fans of traditional full-bore hunting tools maybe, yet those sleek lines have plenty of practical benefits; not least of which is absorbing unsightly levers and cocking linkages - all neatly tucked up within the elongated fore-stock.

All this streamlining means that this Diana model 430 in Stutzen guise, is reminiscent of Military Training rifles, and with that pleasantly figured beech stock, and a hatful of features, it looks good on paper at least.

So just what do we get for our money? Well, with regards to the action, this Stutzen model utilizes the same under-lever mechanics as the standard model 430 - which is itself a compact and lighter version of Diana’s 460 model. Apparently a successor to the 46 Stutzen, the 430 basically represents a carbine (thus lighter version), which is, I have to say a mixed blessing. Carbine configurations, where spring-piston air rifles are concerned, represent a saving in overall weight, yet the trade off comes with a slight increase in the cocking effort, due to the shorter leverage.

Open sights come fitted as standard, with a metal, fully adjustable rear-sight, and an integrally moulded fore-sight/ under-lever clip. This foresight moulding is plastic, but so well moulded, that M&G can surely be forgiven for its inclusion. The ‘irons’ offer a great sight picture although, since this is no beginner’s rifle, I can’t see them getting over used, with any prospective owner far more likely to fit glassware in a bid to maximize accuracy potential. Nonetheless, the sights are nicely made and among the best of their type. Micro adjustable via the rearsight wheel, any newcomer should be more than happy if they do happen to take this route.

Alternatively, a raised sight rail offers deep dovetails and arrestor stud receivers, making the fitting of a scope simplicity itself. Finish to all components and metalwork is first class, as you would expect from this top make, whilst build quality is solid and reassuring.

In use, that full length stock offers a comfortable grip regardless of build, with beautifully grained beech offering an extended fore-end for even the largest framed among us. On a purely cosmetic level, the medium brown lacquered finish, ultra sleek design and extensive chequered panels, all combine, with a quality feel, the end result.

Over the chronograph, consistency with my two main test pellet brands, was near identical, giving excellent results with both Air Arms Diabolo and RWS Superfield. Eventually the .22 Superfields just edged it but with 5fps and 6fps spread respectively, over ten shot strings, consistency from the action was stunning.

It’s fair to point out that cocking the action is an all adult affair, with the procedure as follows: ease the lever down from its spring-loaded détente at the muzzle, pulling it down through an arc until the trigger and automatic safety catch engage. The pellet can now be directly fed into the barrel via the exposed breech. And any dropped pellet should fall through the bottom of the loading chamber (Pro-Sport style), rather than cause a jam of the internals. To return the under-lever to its closed position, the safety tab needs to be depressed to the right of the breech, disengaging the safety ratchet in the process.

In use, one slightly disconcerting occurrence concerned the under-lever, which bounced open just a couple of times as the rifle fired. This lever relies on a spring loaded ball catch, where some versions of Weihrauch’s HW77 for example, have used a catch that effectively locks. Accuracy wasn’t affected surprisingly, and this is hopefully just a glitch of the test sample; yet it needs reporting nonetheless.

Accuracy incidentally, was extremely good, helped presumably in no small part to Diana’s revised trigger unit, which now includes a metal blade and more positive release. Tight ragged clusters were the norm over 25yds and beyond, leaving me in no doubt as to the potential of this classic piece of German engineering.

With Diana’s designers going into prolific overdrive of late, their catalogue is simply brimming with new models. Whilst many of the new offerings represent several variations on a theme so to speak, the company’s timeless engineering quality means most represent a sound investment.

As the Euro exchange rate has taken a hit over the last couple of years, many imported goods such as this Diana, have begun to look less favourable in the ‘value for money’ stakes, with one glance at the retail price enough to require some serious consideration; if not a stiff whisky. Over 500 smackers certainly sets this model apart, yet for aficionados of this style of rifle, the 430 Stutzen has few peers worth considering; representing as it does, a fine example of just what Diana does best.