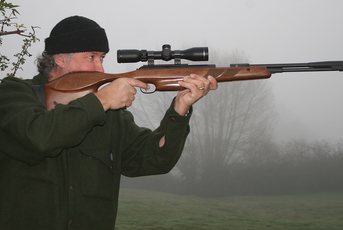 Diana, the goddess of the hunt is synonymous with shooting and the hunting fraternity, and none more so than with the RWS Diana brand of air guns which uses “The Huntress” as a trademark.

RWS make typically Germanic rifles - very well built and without skimping on materials. This translates into big and often heavy rifles, but they will shoot accurately and consistently for a life time. Over 120 years of gun manufacture has gone into the Diana range and their new underlever models, such as the Mod. 470 TH rifle and the Mod. 440 TH carbine (the latter being on test here) represent excellent value for money, and are ideally suited for hunting, plinking or even springer class field target. In fact, the TH stands for ‘Target Hunter’ not ‘thumb-hole’ as some people might think.

Most striking feature has to be the eye catching stock that the model 440 TH sports. It’s a very ergonomic designed thumbhole model – and I like my thumbholes as readers know, and this Diana has a big’un!

Very swept back lines give the 440 a modern look but still contain all the handling abilities you need to shoot accurately. The large thumb hole allows a quick pointing position even with gloved hand or two! But it gives a very nice straight upright, almost vertical hand positioning aim in the tests.

It has an ambidextrous make up, so a raised cheekpiece is evident on both sides making it ideal for right or southpaws alike. The chequering to the pistol grip is laser cut, the forend is well shaped - just in front of the trigger guard is a scalloped hump that allows a good handful if shooting from a kneeling position - while the slender and rounded end looks good and fits the hand well with two separate chequered panels to each side.

The finish is a typically lacquered matt finish, not my favourite but it suits the beech woodwork well and is practical I guess, you cannot beat a nice oiled walnut stock though.
The deeply curved and adjustable butt pad is good however and allows any shooter to configure the stock to their own requirements.

Diana have used a tried and tested under lever format for this model but with a few interesting differences. The short under lever is released from its retaining housing by a simple pressure to release the retaining ball bearing detent. But from then on in the effort increases, and increases a lot. This is an adult gun and requires a good hold and one good swing of the under lever to cock it as you need to fully engage the trigger unit and safety catch - there actually feels like two contacts at the end of the travel.

With the action fully cocked and the spring piston system compressed, the under lever is now locked and there is no chance of it flinging up and trapping your fingers in the loading port because Diana have put an auto safety device in place. To the right of the loading port is a sprung lever that needs to be depressed before the under lever can be returned - a nice reassuring safety feature.

The loading port is large so accessing the pellet directly into the barrel is easy - even with my fingers – and it’s open at the bottom so if you do drop a pellet it falls straight out and won’t jam up the action.

Being a straight in-line design you certainly benefit from the fixed barrel arrangement that will surely help accuracy, but the under lever is not secured in the barrels muzzle weight so if you fit a sling, which I would, it could tug on the under lever and pop it out quite easily.

There is a generous dovetail rail to fit a scope mount and the finish is what can be described as a quality matt Parkerizing, or glass peening in custom rifle worlds, so a seamless finish that offers non reflective qualities for hunting and a scratch resistant surface for longevity - I like it.

Underneath a plastic trigger guard (yuk!) is a nicely predictable two stage trigger unit. It is adjustable but factory set it tripped the sear at just over 3lbs . There was a small amount of creep to the first stage but nothing to worry about and this set up is fine for me in hunting mode. The safety is automatically set when the 440 is cocked fully. A small lever extends from the rear of the receiver wall to expose a red dot. A small push forward to disengage the safety shows a white dot allowing you to fire.  Some find it awkward, I found it no problem at all, only I had to remember was to disengage it before firing, it caught me out a few times, much to the delight of two magpies.

I fitted an excellent Hawke Endurance scope 1.5-6x42mm to the Model 440. These Endurance scopes sport great optics with illuminated reticules all in a 30mm body - a great choice for hunting work.

The firing cycle is very fast for a spring gun but is a little harsh also, with quite a spring twang but this did not affect the accuracy at all. The muzzle weight is just that, not a silencer, so the muzzle report is noticeable but all in all this is a nice rifle to shoot off a bench, standing or lying half drowned in a drainage ditch!

I choose an array of pellets of differing styles and weights to see how the 440 performed.
Best accuracy went to the JSB Exact pellets with really good consistent five shot groups at 25 yards of 0.55 of an inch with a velocity of 781.3 fps and a healthy 11.7 ft/lbs which was second highest energy rating too. This is a really good pellet and my choice as a hunting pellet. The Air Arms Field also shot very well with 0.65 inch groups and 784.0 fps generating 11.7 ft/lbs energy.

I tried some lightweights; the LRG, Defiant and RWS Hyper but this 440 did not like them, with over inch groups, although those RWS Hyper Velocity shot over the Chrony chronograph at a staggering 929.5 fps and 11.5 ft/lbs!

Similarly I tried some heavyweights; the Bisley Magnum and JSB Exact Heavies. The JSB Exacts Heavies shot really good 0.85 inch groups but velocity was down to 680.2 fps and energy was 10.3 ft/lbs while the Bisley Magnums were similar, but they both do better in pre-charged pneumatics.

Despite the 440 being a carbine version of the 470 model, some will definitely find it heavy to hold and requiring effort to cock but to me that’s its benefit. I like a heavier rifle; it feels more stable sitting in the shoulder and deadens the firing cycle to aid accuracy. The 440 shot very well with the pellets on test, certainly favouring some brands more than others, but then all rifles are like that. Nevertheless, for a spring gun some of those groups were excellent.

The thumbhole stock is actually very comfortable despite looking a bit “holey” and that glass peened finish to the metal work is very smart. A very solid rifle that will perform for almost every style of shooting be that hunting, target work or plinking.