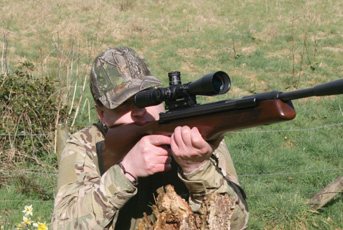 RWS Diana has long been known for their well-made, rugged and reliable spring-powered sporters. Often these rifles had a bit of weight and bulk, but Diana also had carbines and a few slim line lightweights too.

However, the rifle I remember most was the semi-recoilless Diana Air King 54 which I hunted with for many a moon until I gave in to join the emergent wave of precharged pneumatics. My memories are that it was a beast of a gun with incredible accuracy due to its using a ‘sledge system’ to counter recoil, not dissimilar to the much missed Air Arms TX200SR. The Air King is a man’s gun in every sense of the word; big, chunky and a real handful, and now the new Diana 56 TH (Target Hunter) version offers a much more ergonomic yet dominating thumbhole stock needed for all that weighty ironmongery it holds.

When you consider what the stock has to handle on firing you’ll understand and accept why the rifle is such a meaty beast. The dark brown stained beech stock has a well proportioned ambidextrous and well defined cheekpiece. The thumbhole is generous in size (as is everything on the gun) whilst the steep drop down pistol grip has twin panels of fine, well cut chequering. This follows through on the forend as twin panels set towards the front of the lengthy woodwork.

The front strap of the pistol grip has two inward curves, very nice for the fingers to grip, while the sliding rubber butt pad is just the job for setting your sightline for whatever scope you decide to fit.

The top of the neck is broad but needs to be, to allow the action to perform its movement on firing.

I opted to fit a Nikko Stirling 4 - 16 X 44 Targetmaster scope with LRX reticle onto the short, raised rail, also as the scope has a lot to contend with during the firing cycle I fitted a Sportsmatch Dampa Mount. It proved the perfect companion for the rifle as I was soon to find out.

To cock the rifle, grip the rubber-covered end of the sidelever, which is located on the right and pull it out and back. The cocking stroke is long as the lever rotates about 150° front to back, though it draws relatively easily. Like the now discontinued Air Arms TX200SR an extra little ‘tug’ is required at the end of the travel to fully ‘set’ the trigger mechanism, which can be felt as it engages with a click. A further indication of the action state is the rear positioned auto safety moves out another stage to show a white circle indicating it’s definitely engaged once the action is fully cocked.

Like the Air King 54 the TH has a large ‘anti bear trap’ ratchet system that keeps the under-lever in check as you pull it back, clicking over each ‘tooth’ in turn, with the sliding breech moving back opening up to expose the roomy loading bay. Once you’ve thumbed a pellet directly into the breech, to return the side-lever you push down the under-lever locking mechanism, which is little more than an outward bent piece of metal situated on the left of the action next to the breech. It’s basic but ideally positioned to be operated by the thumb of the left.
hand.

When this is depressed it pushes the ratchet system back down into the floor of the cylinder to allow the sidelever to be swung back to its original position where it locks up positively back alongside the compression cylinder. Thanks to the large swept volume of the cylinder (it’s a big tube!) the rifle is a prime candidate for up-rating to FAC power levels.

The adjustable 2-stage trigger is the new TO6 unit which the company has used to upgrade many of their rifle models and has a metal blade. On the test rifle it was perfectly adequate for both target shooting and hunting. This trigger aided by the sliding action which makes the rifle virtually recoilless, produced excellent results. Using .177 H&N Field Trophy’s I was soon making very tight 1/8” groups at a 30yd zero which opened up to just a ¼” ragged hole at 50yds.

As you cock the rifle you’ll notice the action slides forward in the stock and does actually feel loose. This is nothing to be alarmed at as this is all part of the floating ‘sledge’ mechanism that facilitates the gun’s semirecoilless effect. In fact when the 56TH is fired the action slides back approximately 3/8” in the stock, counter-acting the forward movement of the spring/piston mechanism.

Many shooters are still hesitant to go the pre-charged pneumatic route, so the only real choice for those looking for a virtually recoil-free spring powered rifle is the Diana 56TH as tested here or its close relatives, the Diana 54 and 54K Air King.

The Diana 56TH rifle handles surprisingly well, considering it measures 44.75” from butt to muzzle with a 17.3” bull barrel. Incidentally, this ends in an 8” muzzle weight that sleeves back over the tube. However, the rifle has such a dampened report you’d be forgiven for thinking it was a moderator. Long range accuracy is stunning and the build construction has the appearance of a rifle that’ll stand being run over by a tank. The major problem is the weight being 11lbs before a scope is fitted but personally if I was sitting out watching an area on a summers evening I’d not say no to having this with me to bring back something for the table.