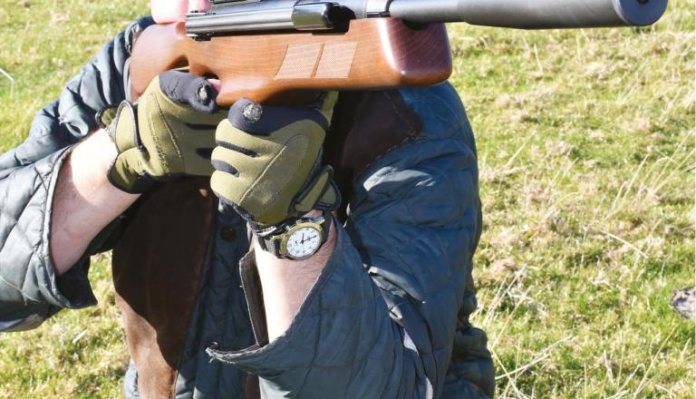 Big and bold, but not sure about beautiful, however, the Diana 56TH Target Hunter, is a statement in airgun design for sure. At 11.1lbs in weight, this monster of a rifle is strictly adult fare, but for those prepared to put in the effort, the rewards are there for the taking.

Regular followers of my output will know that I like nothing better than quirky airguns, that deliver recoilless performance, yet remain free from any charging kit; and on that score, and in this the Diana tick the boxes nicely. These innovative little gems are sadly few and far between in the airgun world at the moment, given that most shooters just want an easy life, so understandably opt for the world of the PCP.

Diana’s 56TH manages to deliver the sensation of a recoilless shot, whilst generating the motive force using a seemingly traditional spring piston power plant. No mean feat of course, and this is cleverly achieved by the way the entire action (complete with scope attached) moves backwards by around 10mm on firing. Disconcerting, you might think, but in practise, with the scope firmly locked down, all remains fairly civilised and works well. That is a fairly unique trick up its sleeve, I think you’ll agree, and we’ll properly evaluate performance shortly.

First, let’s just confirm what we get for the asking price, currently running at £681, a sum significantly lower incidentally, than when I first tested one of these rifles a few years back, which makes a nice and rare change these days! Maybe still a significant RRP for what is a spring-powered airgun, but there’s more to it than that. A springpowered, sliding recoilless action to be precise, along with side-lever cocking, anti-bear trap, direct feed to the breech, barrel weight, automatic safety catch, and thumbhole beech sporter stock, complete with adjustable rubber butt pad. Quite a spec sheet then, so let’s get to it, and see how everything comes together.

Diana, as a German brand, are well known for their traditional machining and high standard of finish, and this 56TH undoubtedly has a quality feel to it. That thumbhole stock is nicely executed, and the slimmed down grip feels good in the aim, but I can’t help thinking that a thumb shelf at the back would have elevated this stock further in the handling stakes. Laser-cut chequering on the grip and forend, look the part and do the job, and the sizeable ‘Diana’ branding on the underside is particularly attractive, as well as being practical, with added grip into the bargain.

The matt lacquer applied to the beech timber overall, is nicely understated, along with the neat ‘TH’ denoting Target Hunter, cut into the tip of the butt. But the inclusion of that high grade, Wegu-style adjustable butt pad, is a serious feature, that will strike a chord with competitive shooters, that demand performance, and any edge that will help them along the way.

If I’m honest, I would prefer full glossy chemical bluing for the action. Instead, we get a highly practical, but rather subdued matt black Parkerised effect, which, whilst probably even more durable than bluing, just looks a bit flat. Look to the side-lever, and the sheer robustness of the chunky components leaves no mystery as to where all the weight comes from. The attachment at the muzzle incidentally, is a barrel weight and not a silencer, as the barrel runs to within a ¼” of the lip of the unit.

Fixing a scope to the action is simple, given the raised dovetail rail on the receiver, complete with arrestor holes, and here, given the fairly quick snap of the action, I would recommend the use of a one piece mounteven a ‘Dampa-style’ unit, to absorb some of the recoil imparted to any onboard glassware. With the scope all sorted, it just remains to get comfortable, shoulder the rifle, and then manoeuvre the butt pad (via a single screw at the rear) to the desired height; a task best undertaken before fine zeroing is carried out.

Up for the challenge

At 11.1lbs un-scoped, as mentioned, this Diana is a real handful, and if you aren’t particularly fit, the sheer heft will take its toll over an extended shooting session. But as cocking effort is concerned, pulling back the side-lever on the right side of the action, is a fairly straight forward affair, given the length and comfort of the rubber tipped lever. And this is where things get interesting.

As the lever is pulled all the way back, the last part of its travel actually pulls the entire action forwards within the stock mounting, by about 10mm. At this point, the sliding breech is exposed. What is fairly disconcerting (for any of us that were properly trained to keep a safe hold of a Weihrauch HW77 under-lever for example), is the way that, with the 56TH, you have to let go of the lever, in order to chamber a pellet into the lip of the breech with the right hand. Yes, there are those massive steel teeth holding back the breech, which are all part of the anti-bear trap system, and you hear the clatter as it does its thing. Yet this approach still flies in the face of good practise, a bit like stroking a dog that’s wagging its tail and growling at the same time! With a pellet chambered, the small metal catch on the left side of the breech now needs to be depressed, in order to bypass the safety mechanism and allow the lever to be returned.

Direct feed does of course have a huge benefit, in that each pellet can be felt to locate within the rifling- which is the ideal way to load any airgun. Too slack or too tight a fit, and that pellet can be ‘called’ and fired off somewhere safe other than the target, so improving consistent results along the way. An automatic safety catch at the rear of the action, comes into play, and this needs to be nudged off, before the shot is taken. With that deep extended forend, this Diana handles rather well and feels good in the aim, but there are some considerations.

Firing the 56TH is a unique experience, and the action feels almost recoilless. It is however, pretty loud, with plenty of resonance as the shot goes off. Given that the action moves on firing, it is of course advisable to not have any part of the hand touching it, especially where the small safety tab sits on the left side of the breech. And whilst on the subject of that moving action, I did experience a slight occasional problem with my test model (supplied in .22 calibre incidentally), in that once cocked, the action was capable of sliding backwards before the shot was taken. If this had happened, then the rifle would still fire, but there would then be some felt recoil. This would affect the impact point, but once I was aware it could happen, I held the gun pointing just slightly downwards until I was ready, to prevent any recurrence. With this more careful approach, the 56TH behaved itself, and produced some superb groups, notably with a variety of ammunition. Air Arms Diabolo Fields were predictably good with 3/8” c-t-c at 30 yards, but Kaiser pellets stole the show with this model, printing clusters around the ¼” over the same distance. Diana’s T06 trigger unit is renowned, and here, its crispness and predictable, light release was particularly appreciated- no doubt contributing to those excellent downrange results.

Weigh up what the Diana 56TH offers, and it’s clear we have here quite a unique rifle, with a hidden secret, that currently has no direct rival. Not one for the feint hearted or small build perhaps, but treat it with respect and care, and this quirky model offers a great alternative to the world of pneumatics. Recoil free shooting, yet free from the aggro of charging gear; and what a refreshing change that is.