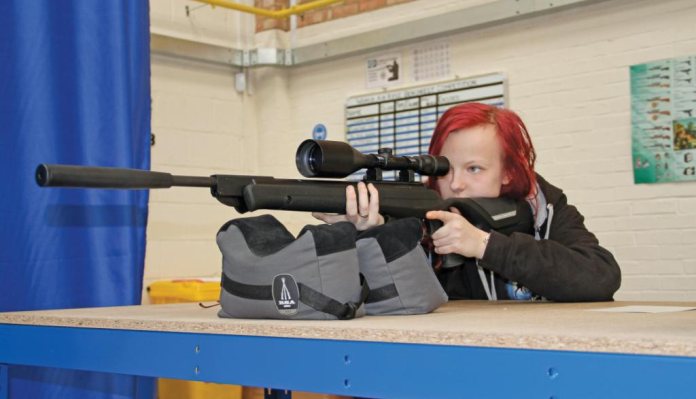 I received a new Diana AR8 air rifle from Edgar Brothers; it is a break-barrel with a gas ram (N-Tec) fitted and modelled after Blaser’s centrefire R8 Professional Success thumbhole stocked rifle. I took it to A Different Calibre air rifle shooting range in Letchworth, which gives a perfect environment to test air guns to their extreme!

Diana is making a habit of cloning full bore rifles, such as the recent K98 and this AR8 is very impressive. It shows excellent build quality but is heavy but accurate. It’s a big air rifle, as Dianas usually are and despite the AR8’s short barrel of 15.75”, it tops out at 45” butt to muzzle!

The first thing is it’s amazingly muzzle heavy and the point of balance is well forward too. This is because what looks like a moderator is in fact a big and heavy, steel muzzle weight at 8 x 1.25” that wraps around the barrel. I conclude it’s the largest and heaviest muzzle weight I have used! The packaging showed an open sighted version with a longer barrel, so that might be another option.

That aside, the barrel is well made internally with few flaws and has a good honed finish. The rifling shows eight lands of rifling that are wide, meaning shallow grooves, the twist is right hand. This certainly helps stability and soft lead pellets are less likely to deform travelling down this tube!

The barrel is set into another large ‘megastructue’ of the receiver that is 4.75” to support that heavy tube no doubt. The breech seal is pretty standard with a black synthetic O-ring, but the lock up is a ball bearing affair. This is reminiscent of the old Feinwerkbau Sport’s system but this Diana really does lock up tight, with a spur that rides over the ball and then wedges it tightly shut.

The action is large too and long at 14.5”, rather than wide at just over the inch. It is finished the same as the barrel, in a tough semi matt/satin black blue that is both durable and good looking on a hunting arm. You have the typical Diana/Original type scope rail added to the receiver top with three securing screws. It’s a bit short at six inches long but there’s a standard 11mm dovetail and scope fitting wasn’t a problem. Power comes from a gas ram system, rather than a spring piston unit. This is instantly obvious when you cock the AR8, as it has a stiff first movement that gets easier as the stroke progresses.

The stock is a near faithful replica of Blaser’s R8 Professional Success furniture. It has a good solid feel for a synthetic and when I removed the action, the forend was reinforced with cross bars of polymer, so the twin securing screws for the action had a good bed. The forend is long and slim but rounded off nicely and has a semi Schnabel tip. There is a semi raised panel of stippling for grip that wraps around the sides and underneath, which is replicated in the pistol grip. The real R8 uses inset rubber panels instead, which is the real difference! The large thumbhole layout is non-biased for hold, so good for left or right handers alike. The cheekpiece has a nice feature of a soft rubber inset that covers both sides and has a silvered panel below, with the lettering ‘Blaser AR8 Professional Success’ embossed. There is also a slim black rubber recoil pad but no provision for sling swivels.

The trigger is a joy, in fact it took me by surprise. For a break-barrel it was incredibly light and it’s loose, un-cocked status was transformed when set into a single stage break of only 1.65 lbs with no creep and an instant let off. You can adjust for first stage weight and let off but the stock must be removed.

The safety is automatic; as the action is cocked, the lever protrudes from the rear of the action and a small white dot is revealed (SAFE). Then a pellet can be loaded, return the barrel to the firing position and the safety can be pushed in to FIRE (red dot). It is not resettable once off.

As stated, it’s a heavy rifle and add in the gas ram’s firm cocking stroke and it does become a tad tiresome! However, you can leave the Diana cocked whilst out in the field without too many of the problems associated with spring guns; such as power loss due to spring fatigue. You get that typical whip-lash effect from the gas ram system and a fast lock time. But you need to develop the correct follow through, as with normal springers, and you’ll realise the Diana’s true potential!

You get a nice blend of power with accuracy, as it is not set too high that lighter pellets will exceed the limit, yet the old favourites like the RWS Hobbies and Accupells shoot very well. The 12-grain Hobbies gave 649 fps/11.2 ft/lbs and very good accuracy, with 5-shots into 0.65” at 25 yards, the best on test.

The 14.3-grain Accupells shot small groups of 0.74” producing 593 fps/11.2 ft/ lbs! I had a few problems with tight fitting new copper- clad Power pellets but overall a good rifle. The trigger was really good and helped get those nice groups too!

No moderator means a loud rifle! I would remove it and fit an aluminium mod or cut the barrel to 12” and use a steel V-Tech can! I fitted an old retro Nikko Stirling 6x56mm scope, which was perfect for the AR8 being high quality and light! I loaded up some RWS Hobbies and headed for the barn and yielded a nice rat on its first outing from a lofted position amongst the straw bales.