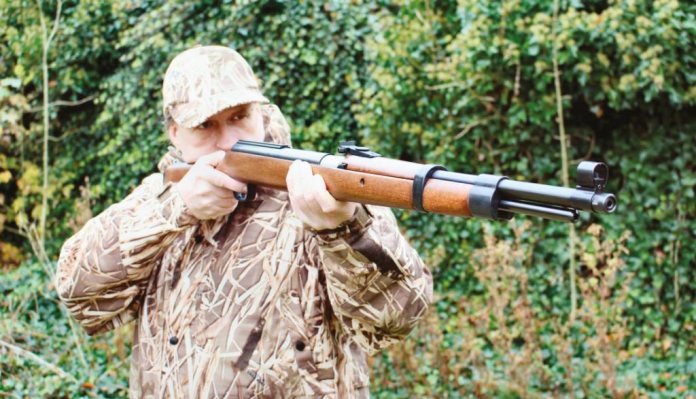 The Mauser K98 will need little introduction to WWII memorabilia and militaria collectors, as this bolt-action rifle (chambered for the 7.92×57mm Mauser cartridge) was adopted on 21 June 1935 as the standard service rifle by the German armed forces. It was one of the final developments in the long line of Mauser military rifles. Although supplemented in its time by semi- and fully automatic designs, it remained the primary German service rifle until the end of World War Two. In service, it proved to be a reliable and accurate weapon, regarded by many as one of the finest bolt action rifles of its time; however, the downside was it was long and heavy. It is also seen as the wellspring for the majority of modern sporting rifles too, such was the importance of the design!

However, this isn’t a history lesson but a test on the very realistic replica that German airgun manufacturing giants Diana have recently released. Now, although an iconic and landmark rifle, the Mauser K98 is not a design you’d feel could easily house a 12ft lb spring and piston power plant. Previously, collectors could purchase original deactivated Mauser K98’s or non-firing replicas – so actually this air rifle is ‘big news’ for those who like to be able to use their guns as much as look at them.

Obviously, the stock is a stand out feature on any replica rifle and Diana has not only crafted furniture of virtually the exact same design but also cosmetically the beech wood has been suitably stained and finished. The slim, ambidextrous design has a low comb, finished with a thick black solid butt plate. There are two features clearly in evidence at this section that add further authenticity to this springer copy, one being a sling attachment point as per original and to illustrate from the outset Diana’s devotion to realism, they’ve even replicated what would have been the firearm’s bolt disassembly disc.

The nicely rounded neck has a very shallow rake and the feel at the pistol grip is practical for trigger control. The shallow, lengthy forend has a very slight forward taper, finished at the front where it disappears into a wide and very generously sized barrel band. There’s also a military-style wooden handguard just forward of the sliding breech, which holds the front sling attachment point and the fully adjustable rearsight. This aligns with a height-adjustable hooded foresight post and is situated far enough from your aiming eye that it quickly and easily comes into focus when drawing a bead on a target. Cosmetically, the sights are in keeping with the original, particularly the foresight configuration. As for fitting an optic, there’s also a slightly raised scope rail fitted top rear of the air cylinder, a design found on many Diana air rifles and one that doesn’t look out of place here.

The action it holds

While the stock is a major feature of any replica, it must be said that the company have even embellished part of the action in such a way that even this doesn’t truly betray it’s an air rifle. I specifically refer to the metalwork seen forward of the woodwork, as the barrel is heavily shrouded to give it larger calibre realism. Even the under-lever, which starkly pokes out of the front of the stock, has no forward retainer assembly so it gives the illusion that it’s the bayonet lug and cleaning rod that the original has housed at this section, albeit a little heavier in dimensions! Incidentally, there’s no worry over the lever’s security when in the closed position, as it’s held solidly in place by an internal ‘lock-out’ mechanism.

From here on, we can look more at the K98 as a working air rifle, as the action is a very familiar design that Diana use on various models of under-lever action springers they produce. Firstly, and thanks to a lengthy cocking slot machined underneath the stock, Diana have enabled the relatively stubby cocking lever to use an articulated linkage, which makes the rifle surprisingly easy to prime for loading.
The practicality follows through to the fact that the rifle has a sliding breech, which moves back as you work the under-lever to the rearward position. Once locked back in the open position, it’s good to see a generous loading bay, which makes direct pellet loading an easy affair. Another plus point is it also has a slot milled out in the stock wood directly below, so a dropped pellet will simply fall out of the breech and not potentially cause any trouble should a loading error go unnoticed.

To return the lever back to the closed position, you need to depress a metal release catch on the right of the breech – not a new idea on an action type such as this but full marks to Diana for adding what is a sensible and practical safety feature. The company have also fitted their up-graded TO6 2-stage adjustable trigger unit with auto safety, as now installed on virtually all their air rifles, which gives a very clean and predictable release. The auto-safety is a pop-out in-line catch positioned at the rear of the air cylinder, so can easily be operated with the shooting hand.

In my opinion, Diana have succeeded in making a very convincing spring-powered replica of the Mauser K98, and although it’s appeal may be limited to those who have a penchant for militaria – at least it’s a solidly built functioning air rifle that can be used. As you’d expect, it’s built like a tank and the open sights are enjoyable to use as a good level of accuracy can be achieved once you’ve become accustomed to them. In fact, I feel most will use the K98 un-scoped, as it’s not a rifle designed for hunting, however ardent collectors I’m sure will track down period scopes to give it even more appeal.

Weighing 9.5lbs, this is no lightweight and due to it measuring a lengthy 44.5”, and considering the almost full-length stock, it’s not surprising that it does feel front heavy. However, its hefty proportions result in recoil being low and muzzle report isn’t overly loud either. Considering first and foremost I’m an airgun hunter, I surprisingly enjoyed my time with the Diana Mauser K98 and even though it has been produced for a niche market, even I can appreciate its ‘unique’ appeal.