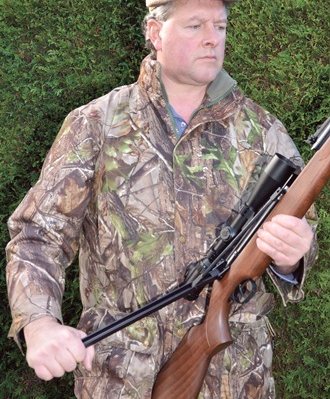 I’ve long been a huge fan of the famous old Diana brand.

Produced by Mayer & Grammelspacher in Germany, whilst the company no longer produce airguns in such vast numbers compared to historical records, the current line-up of models still include several top-class designs. My short-list of the very best spring guns available would automatically include several entries from Diana too, which speaks volumes for the quality. Need a supercompact lightweight break barrel for example, and the Model 280 will do the business for sure, but if you’re after a semi match style, spring powered rifle, suitable for Field Target, or Hunter Field Target, then my test rifle here, the Model 52, just has to be up for consideration.

The Model 52 is Diana’s long established spring powered model that bucks the trend, featuring as it does a rather unfashionable side-lever action. Handling can often be compromised by such a seemingly unbalanced layout, yet the German designers have got round this with some subtle tweaking. A sliding breech, complete with anti-bear trap system, a semi-match two-stage trigger, full-length stock, open sights, raised scope rail, and fixed semi bull barrel complete an impressive features list. Weight is, of course, a consideration, and this full-sized, adult air rifle has to be considered fairly heavy at 8.8lbs. That said it balances well, with weight distribution towards the muzzle, which suits me, but may not be to everyone’s taste.

Diana are known for their overall quality of engineering and finish, and the 52 doesn’t disappoint in this area. However, one thing that struck me at first glance was the rather bland chequering, especially the panels on the forend. The subtle matt finish applied to the attractively figured beech stock is beautifully understated, yet ambidextrous styling on the pistol grip and across the butt are less successful. In keeping with many manufacturers these days, in trying to be all things to all people (it’s cheaper to produce one ambidextrous design after all), the end result is a compromise, so some feel and grip support is lacking.

Handling is enhanced, with that extended forend, complete with thinned down tip, particularly comfortable in the aim. In addition, the fairly deep section of timber (it could be even deeper ideally) just forward of the trigger, allows for some degree of support for standing shots and such like.

My main gripe concerns the cheekpiece which, whilst attractively contoured, just manages to be a little too low. Perfectly usable of course, but I reckon the designers had one eye on open sight use – given the excellent ‘irons’ that come as standard here. Diana spurn the trend for fibre optics, opting instead for a synthetic fore-sight assembly with an adjustable ramp and a solid rear sight complete with twin finger wheels. They work a treat and offer a great sight picture. That said, this is no beginner’s outfit and most discerning airgun connoisseurs – the target audience for this model in my reckoning – will be reaching for the screwdriver to remove the sights entirely.

With that in mind, fitting a scope to the 52 is simple. No vague dovetails here! Instead, Diana fit a dedicated scope rail to the rear of the receiver, offering 6-inches of rail and several anchor points for arrestor studs. This style of rifle demands careful consideration when fitting glassware, since the scope mustn’t foul the sliding breech area, which would in turn restrict loading. Given the dimensions involved it shouldn’t pose a problem unless certain super large FT scopes are considered.

High mounts are much in vogue in FT in any case, which would overcome the problem.

Asked to list what to expect from a Diana airgun, build-quality would be right up there. This Model 52 is pretty impressive on that score, although the inclusion of several plastic components, such as the plastic trigger guard, cylinder cap, fore-sight assembly and safety catch are perhaps surprising on such a top of the range model. Modern manufacturing techniques mean the parts are nicely moulded, so maybe, I’m nitpicking. Take a look at that asking price though, and a fine line of acceptability is trod for sure.

Cocking the action does require effort, but an integral anti-bear trap system means safety is paramount. As the side lever is pulled backwards in an arc, large metal teeth are visibly obstructing the path of the sliding chamber, preventing the breech from closing prematurely at any time, also crushing fingers that may lay in its path! A serious consideration, of course, but another benefit of the design is that the cocking stroke can effectively be completed in stages if required, allowing the teeth to take the strain. Once a pellet is chambered, the small catch on the left is depressed and the lever can be returned.

As usual, a positive sweeping motion is the best route, getting momentum on your side, and making the task easier. That said there is one major observation here: with the side-lever mounted on the right side of the action, being right-handed I naturally pull the lever back with my right hand. I then have to break a golden rule by letting go of the lever whilst I then feed a pellet into the barrel – again, with my right hand. Why the manufacturers don’t fit the side-lever to the left side of the action, I can’t say.

But, moving on to an area where this gun excels, the relatively new T06 trigger design is a triumph. Gone are the slightly vague triggers of old. In comes a fully adjustable, super crisp, sensitive unit, which features not only a metal blade, but a flat surfaced, multiridged one at that! In short, the feel and performance of this trigger is excellent, and a contributory factor in the final down range performance.

For the record, an automatic safety catch engages to the rear of the cylinder, yet the action can be de-cocked. With the cocking arm pulled all the way back to relieve tension, the safety can actually be depressed, allowing the sliding breech to slowly return to its un-cocked position; a little awkward admittedly, but possible nonetheless.

Over the chronograph the 52 posted some textbook consistency figures, and with 10 shot strings showing a total spread of around 7fps with the ubiquitous JSB ammo (in this case .22 Air Arms Diabolo Field), I was impressed as expected. Energy translated to 10.6ft/lbs which may worry some as a bit low. Other ammo will bring that figure up, whilst a worn in action will almost certainly raise it further… so fret not!

As for performance, and despite a fair amount of spring twang /resonance, the actual felt recoil was impressively mild. Terrific trigger, super consistent action, and mild recoil should equal something impressive – and I’m pleased to say it did. Groups of just over a quarter inch recorded at 30 yards, made the point loud and clear.

Take a look at the RRP for this model, and we are talking significant notes. Take into account current exchange rates, the cost of German manufacture, and the highgrade engineering on offer and the Diana Model 52 still seems like a good investment in any case. Quality doesn’t come cheap, and this particular rifle, whilst slightly eccentric in layout, performs superbly. A tad heavy and ungainly, but undoubtedly still one of the very best spring powered airguns on the market.