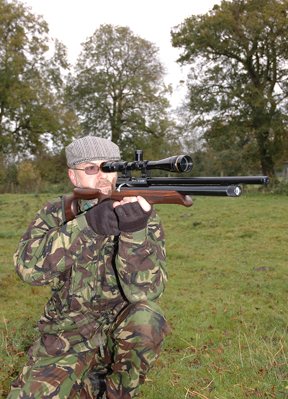 Falcon’s original Lighthunter had a reputation for being a great little performer, in a pint-sized package. The problem was always its looks. The over use of brass straps and fittings, coupled with some less than streamlined components, never did Falcon any favours with some punters.

But Now There’s Been Something Of A Sea-Change.

Whilst a plethora of competitors attempt to flood the market and jump on the PCP bandwagon, with often bland, rather formulaic offerings, Falcon have hit back hard with their beefed up ‘Prairie B’ range.

For the uninitiated, the ‘B’ stands for Bull barrel, and with all the models bearing a ‘Prairie B’ label now treated to a large diameter barrel shroud, amongst other things,  the end result is a revitalized Falcon range with real distinction.

The Lighthunter Lives On - Big Time!

My test rifle came supplied in .177 calibre single shot format, and first impressions are one of a very compact piece of hardware. This is basically a pre-charged pneumatic, designed specifically for lightweight hunting forays, where lugging a heavy rifle combination around all day could just prove too cumbersome.

Scaling the action down to 18inches (main cylinder length), and dressing this in a perfectly proportioned, slim-line stock, means the latest Lighthunter tips the scales at a mere 5lbs! The stock is profiled of course, meaning a large cut-out at the butt end, which loses wood without compromising positional support in any way.

Further unique character comes from the integral trigger guard itself, being formed from swirling walnut, as a continuation of the thumbhole. All easy on the eye, yet with a full drop-down pistol grip, raised cheek-piece, and the ubiquitous, perfectly applied laser-cut chequering (quite an elaborate design here), function leads the way.

The quality of engineering is most evident, and with the latest slick breech block design, this gun has certainly come of age!

With regards to metalwork finish, the barrel and that breech block are treated to what appears to be a pleasant and practical matt powder coating, whilst the main air cylinder is traditionally chemical-blued.

A 14inch barrel sits inside a 19inch shroud, that ends in an attractive ‘twist design’ cap at the muzzle. This cap would normally just unscrew, to reveal a thread that takes an additional silencer. The test rifle proved rather stubborn in this area, to the point where I literally couldn’t remove the cap. A quick call to the Falcon workshop confirmed that this was still a feature - so either I’m turning into a weakling, or they’re using a mechanical tool to apply the caps!

And so down to business. Charging comes via the probe method; inserted into the aperture at the front of the cylinder (exposed with one twist of the knurled dust cover- all very neat - just remember to close it! A 200bar charge is possible but filling to just 185bar gives a more consistent power band.

Next Stop - The Chrono

Compactness in the form of that short action, always comes at a price; yet a realistic appreciation of most hunting trips means around forty usable shots should be considered ample.

At the time of this test, a consignment of the new Webley Harrier 9.5grain pellet had hit my front-door step, and whilst I didn’t expect them to rival the JSB stranglehold, I thought a comparison would be interesting. Well the Lighthunter just loved them, and at 30yds tore sub half inch clusters with ease; even just shading the FX (JSB) pellets I used for comparison.

Accuracy is a formality here then, but if serious hunting is on the cards, then a silencer will be required, as a fair amount of action noise is generated; probably due in part to that short barrel. Balance, on the other hand, can be a case of personal taste, as is so often demonstrated at my local club; yet I would always opt for the dampening effect of greater weight at the muzzle - so the Lighthunter would benefit two-fold from the addition of that moderator.

With the Lighthunter’s trigger adjustable for reach, length of pull, pull weight, and cant, you’d think I’d be satisfied; yet, in keeping with some other Falcon’s, the trigger just still feels a little unsophisticated. Less spring weight on the first stage pressure, and a more shapely blade would help….but then again, this is a sporting rifle, not a match job.

In addition to its hunting credentials, a valuable dual role for this model has to be as a rifle popular with juniors and the fairer sex. That weight-saving format is ideal for shooters of slighter build, resulting in a highly accurate, high-quality tool, which, just for a change, is completely manageable.

Admittedly this product comes at a price, but bear in mind that Falcon is a quality, home-grown British manufacturer, along with Air Arms (it’s sister company from the same NSP Engineering stable), and the rrp’s start to make sense. Pedigree and engineering integrity are worth a premium any day. Don’t forget, these aren’t just slapped together in China…