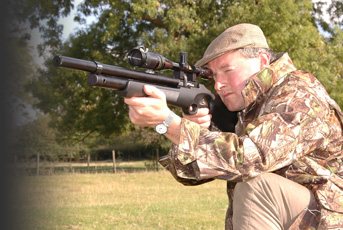 I first clapped eyes on this rather imposing Whisper model at this year’s Midland Game Fair, where the slick promotional video from FX Airguns was pulling in the crowds. Trick shooting was on show, and it certainly had us entertained. One of the stars of that show was this chunky barrelled special you see here, so when the editor asked me to take a closer look, I was understandably keen.

FX manufacture the Whisper, along with their other pre-charged pneumatic models, in Sweden, and with a growing worldwide fan base, they’re clearly doing something right.

The Whisper is based on the full length FX ‘Classic’ T12 action, but there the similarity ends. First, the Lothar Walther barrel gets treated to a full length barrel shroud. Then a more elaborate thumb hole stock is fitted which is either available in synthetic composite (on test), or more traditional walnut furniture if you prefer. The design patterns between wood and synthetic do differ however.

Synthetics are no substitute for a finely figured piece of walnut , but there’s no doubting the advantages to be had from a totally weather proof, modern composite stock. FX have clearly invested heavily in this area, with just about all of their models offered in a little black number, alongside the more conventional woodwork.

This Whisper configuration is impressive, with the thumb-hole itself particularly comfortable, even stylish, as it incorporates a sweeping supportive shelf. My only criticism would be the omission of a thumb-up shelf at the rear, which, since this design is refreshingly right hand biased (as opposed to the ever popular ambidextrous offerings) could easily be included in the moulding.

Those lost points are soon forgotten when some of the other features are born in mind though; and the inclusion of an adjustable rubber butt pad is a real bonus, meaning this stock really has much to offer the discerning shooter.

One minor gripe though, concerns what appears to be microscopic air bubbles appearing in the moulding around the pistol grip area. OK; this may be nit-picking, and it could well be confined to this one example, but I wouldn’t be doing my job if I let it pass without proper scrutiny.

Silence is Golden… or Natt Black In This Case

All the metalwork on the Whisper is given a matt black parkerized style of finish; which, whilst rather dull, is exceedingly practical, given this rifle’s predominantly hunting based credentials. No blueing to polish by the fireside then.

That shroud encases the 19.5 inch barrel, then forms an expansion chamber, complete with baffles, so the resultant muzzle report is, as expected, greatly reduced. If I’m honest though, given the sheer mass of that shroud (not to mention the name of the rifle!), the remaining noise on discharge is a little disappointing. Granted, the expansion of air is thoroughly absorbed and dissipated, but a small noise remains - best described as a rasp, and I suspect vibration from the valve striker and spring set-up, is more the culprit here. With a little tweak from a specialist tuner, I’m sure this could be virtually eliminated, but again, I’m paid to evaluate.

Trigger wise, the familiar FX two-stage unit is fitted, which when correctly set is fairly good, and should please the majority.

With the T12 action shoe-horned into place here, as mentioned, that means the same 12 and 16 shot magazines (.22 and .177 calibre respectively) are utilized. Similar in appearance to the Theoben mags, the FX design has a curious procedure all of it’s own as follows;

With the clear cover facing you, turn the plastic spring-loaded lid counter clock-wise, until it stops. Whilst holding the lid against the spring pressure, turn the magazine over, and push a pellet in backwards in the one visible hole. This primes the mechanism, by blocking the spring tension. Flip the mag over and now fill each chamber conventionally in turn.

The mag can now be pushed into its slot within the action of the rifle, once the bolt has been pulled back and locked into the reverse position. Push the bolt forward and home, and you’re ready for action.

One observation here, and I picked up on this when testing the T12 recently, is the height of that magazine body. High mounts are a necessity, and clearance for the scope really is a consideration. As can be seen in the photo, even with some high mounts, the clearance can be fractional, so bear this in mind when choosing glassware.

The FX magazine system works well when looked after, but is more fragile than some, with the rotary style magazines formed from fairly soft plastic. Some fairly sharp edges around the breech housing mean that care needs to be taken, to correctly and fully locate the mags into their designated slot within the rifles action. With the smoothness of the bolt operation largely dependent upon this, a methodical routine will clearly pay dividends.

Charging any PCP can be the downfall of the system. Consider the relative freedom of shooting a spring powered airgun, and the requirements of a pneumatic can seem laborious and sometimes irritating, with regards to their reliance upon an external power source. All that extra hassle makes sense however, when the significant benefits of shooting recoilless pneumatics are born in mind.

Keeping the charging routine as straight forward as possible is therefore the key, and to this end, FX have opted for the quick-fill approach with all their rifles. As with most pneumatics, the filling adaptor is included with any rifle sold, which, in the case of this Whisper, just needs the probe style fitting to be screwed into place on the air supply. Subsequent filling just requires the probe to be pushed into the female air inlet valve at the muzzle end of the cylinder, and then the non-detachable air cylinder can be charged to 200bar. Empty the bleed valve on the charging equipment, and pull the probe from the rifle. Job done. The system is undoubtedly quick - probably the quickest, but leaving that inlet valve as an open hole where dirt and foreign bodies can try their luck, is the one flaw in the design. A simple push fit nylon plug, along the lines of Weihrauch’s HW100, would surely add a few pence to the asking price.

One further gripe (I’m clearly turning into a grumpy old man!) is the small matter of the positioning of the air inlet valve on pneumatics, which applies to other manufacturers as well as FX. My test model here came with the inlet aperture set to the side, which means that the rifle needs to be supported whilst it stands up to be filled. This can put added strain on the pressure hose as it bends to accommodate - hardly ideal. If the valve were set so access was from the underside of the cylinder, the rifle could be laid down safely whilst charging the system. As mentioned, this applies to other makes, with Air Arms new safety tab design being particularly awkward to navigate; again, depending upon the positioning of the valve, (pot luck it seems at the factory). OK, ‘enough’ I hear you cry!

So how does this Whisper shoot. Well that shroud arrangement certainly helps to bring the balance well forward, which for me, was just about perfect. For the record, the centre of balance sits around six inches in front of the trigger blade, and when I adopted the over arm FT sitting position - a position from which I often take rabbits incidentally - the Whisper just sat ‘dead on’ the target.

Using FX 8.44 grain pellets over 30yds, the Whisper was capable of 3/8inch groups, with half inch clusters being the norm.

Power testing over the Chronograph revealed a competent action, and the quoted .177 calibre shot count (70) was born out, with 75 shots all falling within 19fps, before the velocities began to tail off as expected. Highly creditable consistency.

Take the time to set that adjustable butt pad, and this Whisper begins to feel like a serious piece of kit. Overcoming my prejudice for rifles with militaristic overtones, really wasn’t difficult in this case, as the Whisper won me over slowly as the test period progressed.

The cleverly shaped stock really is a joy to use. Couple that with the mild manners of the action and superb balance, and the Whisper clearly becomes a rifle to shout about…
VELOCITY:
Using FX pellets supplied;
High   789fps
Low   770
Ave   782
Spread   19fps over 75 shots on test