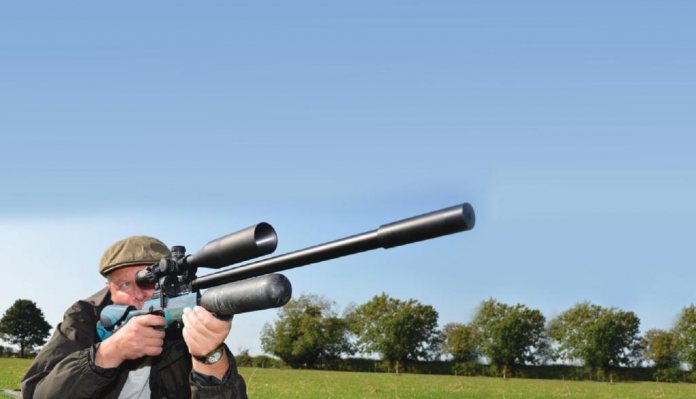 For many whose only experience of airguns is their Grandad’s old Beeza, springer with open sights, and tatty woodwork, to stop and comprehend just how far we’ve come is enough to take the breath away. Glance at my test rifle here, the FX Crown, and if the level of finish and build quality doesn’t stop you in your tracks, then the burgeoning technical spec sheet surely will!

This is a genuine, state-ofthe- art airgun, designed for the specialist, who doesn’t just want to shoot their pride and joy but wants to spend time extracting every ounce of performance. That’s the theory in any case, and this is one bold product, that demands exploration.

The Crown is supplied in a padded hard case, as it deserves. In fully adjustable, Sapphire Blue laminate furniture, as per my test gun, it’s particularly pretty. But the onboard goodies just keep coming. FX specification is best described as an evolving process, and they have dispensed with the telescopic, extendable shroud idea for this model. It now comes fitted with a full-length version, with an additional screw-on silencer. There’s a 2-stage match trigger, the latest upgraded magazine, buddy bottle, twin pressure gauges, safety catch, Picatinny rail, and side-lever operation. The FX Smooth Twist X barrel system is here, along with an adjuster for airflow, and another for back hammer spring tension. Impressive? Well how about an adjustable regulator, that’s onboard too?

FX recommend filling to 250 bar and supply an adaptor that snaps onto the valve on the underside. A neat cap keeps crud from the workings. With a 280cc buddy bottle onboard, the shot count is hefty, at around 450 in .22. The beautiful laminate woodwork offers an adjustable butt pad, which just needs slackening off at the rear, and then re-tightening at your chosen height. Setting the cheek height is equally simple, with Allen key access via the hole in the right side, giving perfect eye/scope alignment.

Having spent a lifetime paying clever engineers to set up my competition rifles, I’m clearly not the sort to dismantle guns on a whim and start twiddling. So, I expected to run into a few posers, given the potential for adjustment. I didn’t, however, expect the vacant look to descend so soon – on something so simple as filling the magazine. Not having encountered the very latest version of this ‘Sideshot’ magazine, it had me double-checking the format.

Instinctively, you go to twist the clear front of the casing, and it doesn’t! Instead, the small semi-circular bar needs to be twisted until it covers the slot, then the clear lid can be pulled off. Now the rotor can be turned anti-clockwise until it stops. Keep holding it against spring pressure and drop a pellet into each chamber until full. Keep the mag upright until you have replaced the lid and twisted the bar back to its original position. The mag can now be inserted into the slot in the action from the right side, unusually at a sloping angle. It’s a bit fiddly for sausage fingers, but you soon adapt, and once it’s fitted, cycling is smooth and efficient, courtesy of that neat side-lever.

Power to the people

And so, to the adjustable elements of the action. Different pellets and air flows can mean changes to velocity and ballistics, but the Crown allows the user to adjust the air flow at the transfer port. This is nice and simple - High, Low and Medium options. Set to Low, and you’ll get many more shots at around 7 ft/lbs. The rear dial adjusts hammer spring tension, so how fast and hard it strikes and opens the valve. The potential for trial and error, and experimentation, gauging changes in performance with different ammo, is simply enormous - all in a refined controlled fashion. Altering regulator pressure is on the cards too and whilst some enthusiasts will jump at the chance to play, there’s no doubt that tweaks and alterations here are far more relevant where FAC power output is concerned.

My tester came in .22 calibre, but a quick check of the power showed it was set a bit low, even with both the front and rear power adjuster dials set to max. In my ignorance, I reckoned it had to be worth playing with the regulator pressure. As specified, two gauges are fitted - one for main pressure, the other for the regulator pressure pre-set at around 45 bar, I reckoned that sounded a bit low - certainly compared to many rival models, which sit around 70-80 bar. As it turns out, that’s around where the 12 ft/lbs Crown normally operates.

Decide that you need to alter the regulator, and the process should be straight forward. The adjustment screw sits just behind the front gauge, which to be honest, is confusing, as it’s for main cylinder pressure, and it’s the rear gauge that shows the reg! Confused, yes? Any instructions come bearing dire warnings before you start! Never adjust the reg above 150 bar, and the key warning- NEVER turn the regulator adjustment screw clockwise (which decreases pressure) whilst the system is under pressure, as this will not only damage the reg but void your warranty! If you are an ambitious yet ignorant twiddler, then I’d say proceed with caution.

The correct approach is to first unscrew and slacken off the buddy bottle until a hiss is heard as air between the connecting chamber bleeds out. Now turn the adjuster screw clockwise until resistance is felt. This will set the reg to its lowest pressure. The system can now be repressurized, and the reg screw turned anticlockwise until it increases in pressure and hits the desired point on the gauge.

A bit out of my comfort zone, yet the fact that my test rig came in underpowered proved a catalyst for gaining familiarity and learning along the way. Thanks to the technical team at the Sportsman Gun Centre too, for bearing with me and talking through the process, to get this gun up to spec. As it turned out, it wasn’t my incompetence, rather the way this sample had been factory set. The reg should be around 45-50 bar apparently, so that was OK, but a small screw that lays beneath the knurled hammer spring dial at the rear, needed adjustment, to raise the power potential. Thereafter, everything fell into place.

FX fit their new, Smooth Twist X barrel system here, and that takes the form of an interchangeable liner. Kits are available to enable the owner to change calibre, as well as rifling twist rates. This really is quite an exciting prospect, meaning you can switch liners, then fine tweak reg pressure, hammer spring tension, and air flow, all with a view to getting the best performance from a particular pellet. I know all this fiddling will be off-putting for some, but if you are the type who loves to experiment, then FX has really pushed the boundaries here, opening up a world of exploration.

So, what about performance? I shot 6-magazines worth (108-shots) using Air Arms Diabolo with an extreme spread of just 12 fps, not too bad! Best accuracy; ¼” groups, ‘centre to centre’ at 40 yards, again not too shabby. Factor in that pleasing trigger, muted output, and silky side lever operation, and to say the shooting experience is satisfying is a real understatement.

If you’re a plug and play sort of person, who just wants to get on with it, rather than too much tampering and adjusting, then the Crown is probably not for you. Yet as the Sportsman team were only too keen to point out; there’s an army of enthusiasts out there who really appreciate the potential that these models offer. And the very fact that so much adjustment and experimentation sits at your fingertips, is for them, a huge selling point.

FX Airguns are clearly riding a wave at the moment, enjoying their upwards trajectory as they grab the headlines. Consider the success they have enjoyed in the Extreme Bench Rest disciplines in the States, and it’s clear that this stylish and evercreative Swedish brand has no intention of resting on their laurels. Indeed, this new breed of fully’ tweakable’, customizable models, are fast becoming the USP for them, as they carve out something of a niche sector in our increasingly competitive market.

Inevitably the ‘keep it simple’ brigade will be muttering, yet to dismiss such refinement as ‘over the top’, is surely to miss the point. For what it really comes down to is that the Crown deliberately complicates elements of the action, in order to offer an additional level of refinement for those that appreciate such detail. And as such, and so far it reigns supreme.