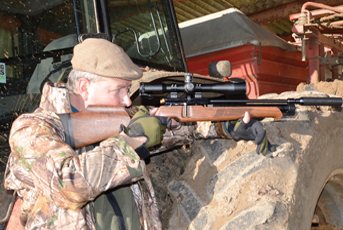 Let’s face it, the modern pre-charged pneumatic can be rather samey, as many a manufacturer just brings out their own version of a tried and tested design.

The blueprint of a bolt-action, barrel over cylinder rifle, has been copied the world over, so it comes as a breath of fresh air when a manufacturer shows some originality along the way.

FX Airguns of Sweden, under the guidance of Freddie Axellson, have made quite a name for themselves, for cutting edge design and innovation, and their vast product range of pneumatics has a model to suit most shooters. Quirky is a word that often comes to mind when FX enter the fray, and on test here is the walnut stocked carbine version of the Cyclone pre-charged pneumatic, which comes bristling with impressive features that add greatly to the rifle’s appeal.

OK; the Cyclone does follow that tried and tested basic layout, yet look closer, and you begin to appreciate just what’s on offer here. The eye catches that highly attractive walnut stock for sure, but throw in a well designed two stage trigger, 8-shot rotary magazine, quick fire side lever, and a three level power adjuster, and you begin to realise that this is no run of the mill PCP. Indeed the plus points are stacking up fast; so let’s look at what’s on offer in detail.

Apparently all FX rifles now utilize Smooth Twist barrel technology, and this in itself is highly innovative. For those unfamiliar with the term, the barrel is actually smoothbored, until the last few inches. A revolutionary manufacturing process sees the barrel tube placed into a machine which effectively crushes the last section of the tube, and as it does so, it imprints the rifling pattern on the inside. With the pellet travelling down a smoothbore, and only passing through the mild restriction at the end of its travel, (similar to the way a choke works) overall resistance and friction of the projectile is reduced. As less energy is wasted, so efficiency is improved, with regards to air usage etc., and with reduced manufacturing costs a major benefit, the system could have a big future.

Intriguing stuff, but I should note at this stage that I’ve shot a few rifles over recent years with Smoothtwist barrels, which were less than impressive. However, as we’ll see, this Cyclone actually shoots rather well, and as if to emphasise the point, so did another FX that I’ve had through recently - so perhaps the technology that’s promised so much, has started to look like it may have finally turned a corner.

The walnut stock supplied here is a mouth-watering example of modern airgun manufacture. Beautifully figured wood is a great start, and the laser cut chequering, including the company’s name picked out on the fore-end, is perfectly executed and functional into the bargain. What really impresses though is the seriously good configuration. The fore-end with its schnabel style tip adds to the functionality and aesthetics, but it’s the grip and butt that really impress.

This stock has a dedicated right hand bias, and that sees the delightfully thinned down pistol grip offering a deep thumb shelf and subtle palm swell. The hand feels totally in control, and my trigger finger fell perfectly on the blade. The overtly angular, roll-over cheek piece is another bold piece of design, which manages to be supremely comfortable as well as visually appealing. An adjustable Wegu style butt pad, complete with that concave, shoulder hugging shape, is the perfect finishing touch too.

Without a silencer fitted, this carbine model comes in at a super compact 33inches, making it highly manoeuvrable in a confined space. However, given the fairly noisy report (perfectly understandable given the short barrel), I wouldn’t hesitate in adding a moderator. It’s a simple matter of just screwing it into place at the muzzle, once the protective ring has been removed. For the test, I used a Daystate Airstream model, which screwed up tight, and complimented the Cyclone’s looks perfectly.

Charging the on-board cylinder to 220bar is a relatively simple affair, and FX use the quick fill method, whereby a probe from the air supply is pushed into the valve at the front. A couple of points to consider here. Firstly, the inlet valve on the action is open to the elements, and could do with some form of cover to keep out dirt etc.. Secondly, it seems pot luck whereabouts the inlet hole appears round the cylinder - set at the production stage. My test rifle had the hole up by the barrel, which made charging just a little awkward. With the inlet directly under the cylinder, the rifle could be easily laid flat whilst charging takes place. Seems a small point, but it makes a difference!

This Cyclone utilizes the FX 8-shot rotary magazine, and this is a beautifully simple, ultra robust, cast metal design. The filling process is as follows:  the Cyclone’s beautifully shaped drop-down cocking handle needs to be pulled right back to cock the action. Next, the brass magazine retaining button/ disc to the rear of the action, needs to be pulled back, which releases the magazine itself. With the mag removed, the chambers can then be filled in turn. Once full, simply push the mag back into its slot and push the main lever forwards, and you’re ready to go!

At this stage, the ultra slick design allows for fast fire shooting, just as fast as you can cycle the lever; and I have to say, shooting the Cyclone on test was great fun and immensely satisfying. The silky smooth mechanism worked without a hitch too, cocking the action and cycling a pellet perfectly each time, which speaks volumes for the design. The multi chambered Airstream silencer was clearly doing its job too, as the significant muzzle crack was muffled to a whisper.

A gun of this quality, and certainly this price, demands a half decent trigger, and on that score, I’m delighted to report that the Cyclone doesn’t disappoint, with an excellent 2-stage adjustable unit on offer. Indeed a perfectly shaped, broad, flat blade, and crisp precise let off, just about sums it up, and whilst this is an area where personal taste plays a part, precise operation surely appeals to all. Safety catches on the other hand, hold little appeal to me, but this one is manual for the record.

Handling the Cyclone really is a pleasure, thanks to that stock, and as previously mentioned, that schnabel tip fore-end, excellent grip, and superb adjustable butt pad all play their part. OK; the stock would benefit from a deeper section just forward of the trigger, to aid standing shots, but this is a failing of many other rifles.

So what about performance figures? Well this is the point to mention the Cyclone’s rather clever added feature of a built in power adjuster. Three levels are possible, with 11-12ftlbs on the high setting, around 9ftlbs on the middle setting, and approximately 7ftlbs on low. This is achieved via the small black knob just to the left of the breech block. For the main test, I stayed with full power, and managed not only 120 shots within 30fps from a 220bar fill pressure, but half inch clusters at 35yds, using FX’s own JSB made pellets. Great results, and don’t forget that shot count will increase dramatically on lower power settings.

So, with little change from a grand, these rifles aren’t exactly cheap. What they offer though, is a unique feel, and some imaginative features that set them apart from the opposition. The fast-fire side lever action is a real delight to use, whilst the variable power adjuster takes versatility to a new level.

In short, these rifles have great appeal, offering variable power, in a fun-to-shoot, ultra slick package. Being equally at home in the field as a serious hunting tool, just about sums up why the FX brand has gone from strength to strength. So if the RRP doesn’t scare you off, the Cyclone definitely deserves careful consideration. GM