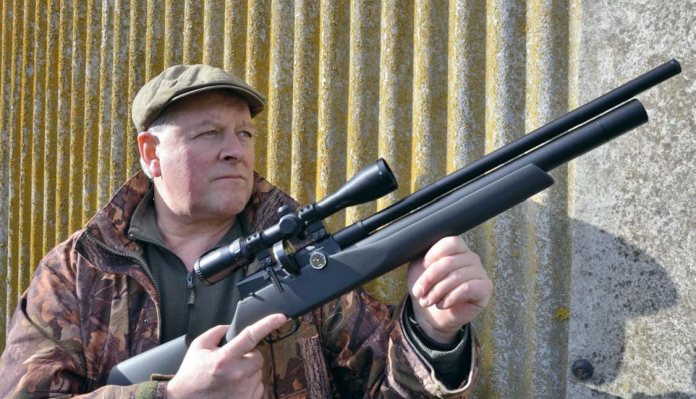 Swedish brand, FX are undeniably one of the most innovative airgun makers around and their products come crammed with features to satisfy novice and connoisseur alike. Complexity and a quest for sophistication is all very well, but I’m well aware that a sizeable section of the airgun shooting fraternity are happy to keep things simple, and can indeed find a barrage of features off-putting.

Cast an eye over the FX models these days, in terms of what features are on offer, along with the RRPs, and I reckon the Dreamline Classic in Synthetic spec, on test here, falls somewhere in the middle of the range.

At a tad over the £800 mark, the Dreamline is sensibly priced and whilst it carries a host of ‘tweakable’upgradable features, it can be allimportantly, readily used in its supplied format. In a word, what we are talking about is ‘modular’. So, let’s look at what we get for the asking price first and then peruse the options for aftermarket add-ons further down the line.

FX only make PCPs and the Dreamline Classic here is a fine example of what they do so well. The pleasingly simple profile comes from the full length shrouded barrel and main cylinder, blending perfectly with the slimline sporter stock. All the metalwork gets a matte black finish, and coupled with the tasteful soft-touch feel of the synthetic stock, gives the Dreamline ultra-practical, anti-glare credentials.

FX are well known for its multi-shot systems and the Dreamline is another of its models to adopt the new style, ‘Side Shot’ magazine. Unusually, the front of the mag comes away, so access to loading has never been easier. Click the front keeper bar round to the top position and the clear magazine cover pulls away. Now, wind the internal drum anti-clockwise against spring pressure, then drop in the first pellet nose first, which will hold the drum mechanism. Fill all the remaining holes, replace and lock the cover back in position, and we now have a whopping 22 shots ready and waiting in .177 (on test), and still 18 shots in .22. There’s no doubting the advantage of having such a sizeable shot reserve onboard, but the downside is that the sheer size of the mag necessitates the use of high scope mounts, so something to ponder.

Get the scope sorted, and the butt pad can then be adjusted to get scope/eye alignment just right. There is perhaps a source of irritation in requiring a screwdriver to do this, rather than an Allen key, but I’ve got little else to nitpick over!

As far as specifications, the Dreamline is a regulated, pre-charged pneumatic. The shrouded barrel is designed to dissipate spent air after the shot, however, if you want super quiet, the muzzle cap can be unscrewed on the shroud, to take a 1/2” UNF silencer. As it stands, the action lacks the harsh notes, but could hardly be called quiet!

Charging is via the push probe method and this is certainly quick. There’s a manual safety catch that sits just behind the side-lever and knowing how many shooters value a safety system, the subtlety I’m sure, will be appreciated. If not, just ignore it.

FX triggers are normally high standard and the unit here is fully adjustable, sensitive and even sports an adjustable shoe, adding further class to an already pleasing rifle.

FX fit two manometers to the Dreamline Classic. One displays the regulator pressure and is mounted on the right side of the action, and the other, sitting at the front of the cylinder, shows the main residual pressure in the cylinder. The regulator is the latest AMP spec, standing for Adjustable Match Precision. It’s designed to not only be robust, but also adjusted externally, without having to depressurize the cylinder. Valve flow, hammer pressure and regulator pressure can all be adjusted, with a view to fine-tuning shot release, to take into account particular ammunition weights and configuration.

On the Classic version, as reviewed here, we get a large side wheel on the left-hand side of the receiver, to adjust the power directly via the airflow/ transfer port. On test, the ‘High’ setting returned around 780 FPS with Air Arms Diabolo Field pellets in .177. Dialling to ‘Medium’ made little difference, to be honest, but ‘Low’ gave velocity in the region of 575 FPS. Obviously, the shot count would be significantly higher when switched to low power, and this adds versatility to the system. Where the Classic version of the Dreamline differs from others, is that both the AMP regulator and hammer tension can only be adjusted with the stock removed.

FX is the main manufacturer to have adopted the Smooth Twist rifling system, devised originally in conjunction with Ben Taylor of Theoben fame. For those unfamiliar, high pressure is applied externally to the last few inches of the barrel. This process creates a shallow impression on the inside of the tube, which minimizes friction with the projectile when compared to full-length conventional rifling. The benefits of this process include the fact that it’s cheaper to produce rifled barrels in this way and that fouling should also be minimal.

FX’s Smooth Twist X (STX) barrel system is fitted to the Dreamline Classic, and this offers the opportunity for yet more technical experimentation. Several special barrel kits are available, to allow the calibre to be switched, along with replaceable linerseffectively offering interchangeable rifling twist rates. There’s an optional Slug Power Kit, including a heavier hammer and slug pin, and with FX’s manoeuvring on the FAC stage of late, and success in specialist competitions, catering for this increasingly popular ammunition makes sense. Take this route, and that’s where the adjustable reg, hammer and valve can become so important, when it comes to rebalancing shot delivery and airflow.

Leaves you cold? Terrified at the mere thought of making adjustments? Well, fear not, as that’s the key note here. Don’t be put off by the technical nature of this model, as the adjustments, alterations, tweaks and fine balancing of the components are all there as options, ready to be utilized by shooters who wish to experiment. For those who just wish to pick the gun up and leave well alone, I think you’ll find that performance as delivered, certainly in 12 ft/lbs spec, is well up to the mark.

Filling the system to 230bar as recommended, I then shot through seven magazines worth, giving a total of 154 shots. All were within a fairly creditable total spread of 25 FPS, using Air Arms Diabolo Field pellets. An interesting observation was that the drop-down, Biathlon-style side-lever, something that FX excels at, was super smooth and fairly effortless to pull back. OK, we would expect all that from this Swedish outfit, but look closer and the throw of the lever is significantly longer than most in my experience.

Cycling the lever indexes the next shot and for the record, the mag can be emptied just as fast as that slick lever can be worked.

So how did the Dreamline shoot? Well, I must confess here that I actually began with a tin of pellets which was 4.53” head size and these single holed at 25 yards. Moving to 40 yards, and having run out of the earlier batch, I still managed impressive sub 1/2” clusters, but just felt that this gun would have pushed even further given half a chance. As usual with this grade of airgun, it’s not so much the final results that stand out (although they are well up to scratch), more the manner in which they are arrived at. The incredibly user-friendly, silky side-lever, subtle trigger and smooth handling overall come together perfectly.

FX just get better and better in my view, and this Dreamline Classic Synthetic is difficult to fault. OK, if I was laying out my own readies, I would almost certainly plump for the walnut handle, as a somewhat boring traditionalist with a penchant for swirling grain patterns. Yet passing up on this aesthetically pleasing soft-touch stock option, is no easy decision.

Either way, the technical proficiency on offer with the Dreamline Classic action is a safe bet for newcomers, who wish to make a sound investment that will reward their efforts, or experienced shooters, who appreciate class and the potential that this model offers.