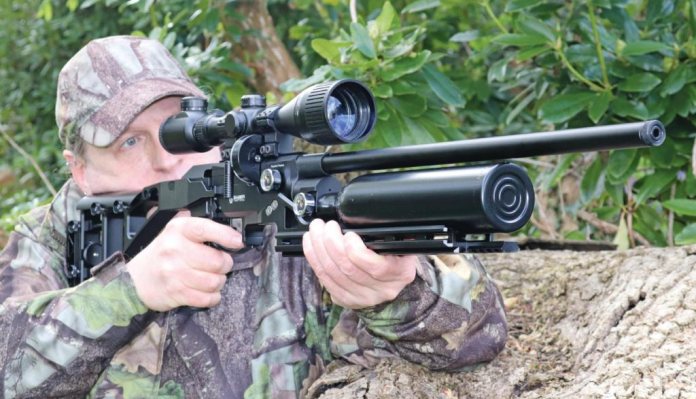 For many years, the Swedish airgun manufacturer, FX Airguns has brought us a host of high quality and innovative PCP air rifles. However, I think it fair to say that since the first model of FX Dreamline came to these shores, their status within the industry and with the shooting public has risen even further.

A major reason for this is that the Dreamline is the first fully modular airgun system in the world, meaning the rifle can be customised to suit your particular preference. So, the power source can either be an air reservoir or bottle (aluminium or carbon) and the action can be set in a variety of stock designs to suit the hunter or target shooter. Here, the ST Elite sees the Dreamline action dressed in a skeleton alloy stock, so let’s take a look at what is possibly one of the most innovative and unique PCPs to date.

The stock is manufactured by Saber Tactical and is unsurprising, denoted as their tactical stock. For the uninitiated, Saber Tactical Inc are a company that produce aftermarket airgun accessories and collaborate with the industry as well as retailers to attain feedback on what the airgun users of today require.

This radical-looking, ambidextrous stock is made of high-grade, black anodised aluminium and includes a heightadjustable cheek piece plus a length and heightadjustable, rubber butt pad. Both are easily set to the position you require and are secured via fingerfriendly thumbwheels.

The Hogue pistol grip has a semi-rubberised outer and due to the full wrap-around design, feels superb in the hold. The stock is foldable and the hinge sits just behind the pistol grip. When folded inward it’s held in place by two strong magnets.

The fore section consists of an Arca Swiss rail with a short run of Picatinny rail at the very front and M-LOK slots running along both sides of the main rail, which can be used to attach accessories. There’s also a built-in, detachable bag rider. Although looking very spartan, it’s surprisingly comfortable in the hold and does a fine job of protecting the air storage unit, whether that be an air cylinder or bottle. The stock also has QD sling mount holes integrated into it on both sides.

The rifle fills via a covered inlet port on the left-hand side of the action, near to the buddy bottle connection point. It’s worth noting that the action can be purchased with a 220cc air reservoir fitted (cylinder) or one of two buddy bottles, a 220cc or a 230cc. The test rifle came fitted with the latter and from a 230bar recommended fill, the Elite returned approximately 250-260 full power shots in .177 calibre.

You’ll notice that there are two air gauges on the righthand side of the rifle. One clearly marked as such, tells you the regulator pressure, whilst the dial closest to the buddy bottle indicates the status of the air in the bottle. The regulator pressure can be altered if you change calibres or are shooting at FAC power levels. More on this later as it’s an important feature, but only when used correctly and set by someone with knowledge of the importance of valve flow and internal rifle harmonics.

Following on from the importance of setting valve flow, a USP of the Dreamline range is they include the new AMP Regulator (Adjustable Match Precision Regulator). This unique air regulator can be adjusted externally to run at different pressures, without having to empty the rifle of air. However, as mentioned, this is of more relevance to the FAC shooter because 12 ft/ lbs versions are fitted with an anti-tamper mechanism to comply with UK laws.

Adjustments can be fine-tuned and include valve flow, hammer tension, and regulator pressure. They give the shooter the ability to maximize the performance and accuracy of the Dreamline in relation to calibre, pellet weight and power output. In fact, both dials on the left of the rifle can be used in conjunction with each other to achieve optimum performance. I’d recommend a trained airgun smith do this for you and the FX technicians at The Sportsman Gun Centre are more than capable and ready to do this for any customer who requests tuning.

Now, the dial at the front is also marked High, Medium, and Low. This operates similarly to the old-style power adjust lever that was fitted to older FX air rifles. There’s not much power change between high to medium but when set on low, some may find it useful for close-range ratting and to prevent ricochets in tight enclosed places.

The Dreamline range all use a biathlon-style sidelever to cock the action, which in turn runs the very highcapacity magazine, and what a superb unit it is!

The Perspex fronted rotary magazine houses 22 pellets in .177 calibre and 18 in .22. As a matter of interest, the mag capacity is less in the two larger calibres the rifle is available in, those being .25 and .30. The mag is a well-designed unit and although loading will at first seem a tad unusual, once undertaken it immediately shows itself to be very user-friendly.

In the centre of the magazine cover plate is a curved, arc-shaped cover plate lock catch. When this is turned anti-clockwise (approximately ¼ of a turn) it unlocks the cover, which can then be lifted off/removed from the main body of the magazine. You then turn the inner rotor anti-clockwise against spring tension and drop in the first pellet. This holds the rotor in this position so you can now fill all the empty chambers that are facing you. Replace the cover plate, turn the lock mechanism clockwise back to its original position and the magazine is fully secured and ready to be inserted into the righthand side of the rifle.

The FX Dreamline boasts the now highly recognised match-grade, free floating, FX Smooth Twist X barrel. The Interchangeable Barrel Liner System allows the calibre to be changed, plus you have an option of different twist rates, depending on the core liner fitted.

Along with the ability to fine-tune the internal valving to suit a specific power level, this barrel system allows you to configure and optimise your barrel to suit the specific calibre and pellet type you prefer. It’s also threaded at the muzzle to accept a standard ½ UNF, female threaded sound moderator.

As standard, the rifle’s action is machined for scope mounts but you have the option to fit a variety of FX scope rails, which are readily available. Both are of a Picatinny design, with one being a straight, raised rail, while the other has a -20min of arc to compensate for the height of the rail. This is useful because some scopes might run out of adjustment while setting zero for sensible 12 ft/lbs airgun ranges.

The Dreamline has a 2-stage, adjustable matchgrade trigger unit. It follows the familiar post and shoe format that was once found only in the realm of the FT shooter. It gives you full adjustment for finger feel and also helps give a higher degree of trigger control. On the ST Elite, the unit has a manual safety, which is a small lever positioned directly above the trigger on the right-hand side of the action.

After scoping up to begin shooting, the rifle soon began to impress with its super smooth cocking cycle and even without a moderator upfront, the report was quiet enough for general hunting applications.

Shooting rested at 30 yards, accuracy was chillingly clinical and I achieved ragged one-hole pellet sized groups again and again. They only slightly opened up to clover leaf groups when pushing out to 40 yards, so as a hunting machine, the FX Dreamline ST Elite will outshoot the best of us.

It would be true to say that many airgun shooters are now taking to the ‘design concept’ the Dreamline pioneers. In that respect, FX has really taken the lead in innovation in a market that is now saturated with what in many ways are the same take on a very familiar theme. That said, the traditional sporter-style of PCP air rifle will always be popular but at the rate FX are going, who knows what they’ll create next, which no doubt will grab the airgun shooting public’s attention yet again.

The performance of the Dreamline is exceptional, as is the quality of engineering. The sidelever operates effortlessly and is the smoothest I’ve experienced to date. The magazine system is equally worthy of praise and as for accuracy and consistency, this is a rifle that’s hard to beat.