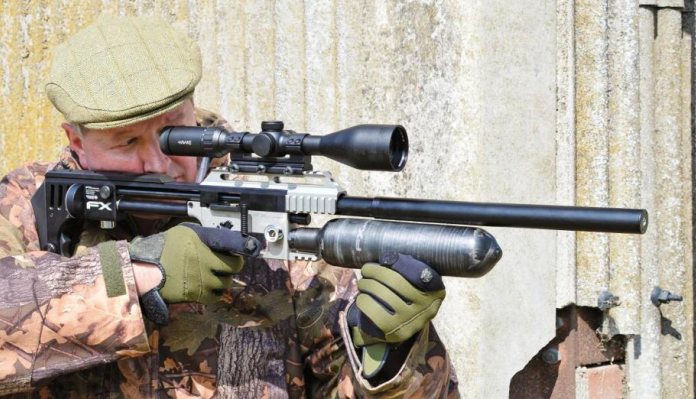 Think ‘radical design’, and FX Airgun’s name is liable to crop up in conversation. Radical also describes their Impact model too! It’s a bold offering and clever design means that despite being a Bullpup PCP, it has a more streamlined appearance than many. So, what do we get, for the not inconsiderable asking price of around £1700?

This model is designed with one eye on the high-power market (FAC-rated), and with FX’s record in Extreme Benchrest competition in the States, it’s understandable. Yet despite being a potential power monkey, the diminutive Impact is about as compact as it gets; to the point where it comes supplied in its own dedicated, robust, fully padded and compartmentalised carry case. And all very neat it is too, at just 36 x 14”.

The barrel shroud is telescopic, with the outer tube pulling out, to extend the length and increase the expansion chamber within or pushed back for maximum compactness and storage. FX state that this feature needs to be used either fully retracted, or extended, but the sheer simplicity, and effectiveness (it is amazingly quiet) is typical of the innovative way they do things!

My test gun came specified in the silver option, and that meant the Picatinny rail, additional accessory rails (two on the side, and one underneath the action), and the action/ breech block, all came in silver. Finish is impressive, and I really like the contrast of the matt silver alongside chemically blued and anodised components. Everything feels well machined and finished, and the prevailing air of quality again just brings confidence. The 500cc buddy bottle, dictates the Impact’s profile, which is manufactured from a special mix of carbon fibre and aluminium. It weighs less than a conventional design, yet is apparently much stronger; so, reassuring on both counts.

Although the bottle is removable, this is more a safety feature for testing, since charging is done ‘on-gun’ via the snap-on, Foster-style bayonet valve adaptor, and the valve itself is situated on the underside of the action, just forward of the trigger guard. Use the adapter provided too, since similar looking standard items lack the length, and will get trapped onto the valve! Critically FX did not include a dust cover to keep dirt and crud out of the valve works! A surprising oversight, given how such an inclusion is important in protecting the action, and how little it would add to the asking price!

Charge the bottle slowly to 250bar, and you can then expect an astonishingly high shot count- somewhere in the region of 600 in .177 calibre, and 700 in .22. For those obsessed with such detail, the figures can’t fail to impress. In a real-world scenario, a gentle top up of the bottle periodically will mean you’re unlikely to get caught short anytime soon!

The Impact offers a slick multi-shot system, with the clear-fronted, cassette-style magazines laying at its heart. 16-shots are available in standard .177, along with a hi-cap 22-shot unit. If you like .22, then you get 18, which again is impressive; either way, there’s plenty of fire-power. To fill the mag, grip it clear face on, and twist the front clear cover fully anti-clockwise, then insert the first pellet skirt first, from the rear. Turn the mag over, and fill head first as normal. The Picatinny base means easy scope mounting and with a scope in place, I was almost ready for action.

Shoulder height of the butt pad can be altered, albeit slightly, activated by the wheel on the right side of the rear of the stock, moving the butt pad up or down, and there’s roughly ¾” to play with. The sight-line is quite high, as per the setback action, but if you’ve got this far, the Bullpup concept clearly appeals!

Mount the Impact, and that drop-down rubber feel grip is soft to the touch; it should be, as it’s the Hogue, rubber, over-moulded unit as used on many AR15 rifles, so you have plenty of alternative choices. Typically, the buddy bottle doubles up as the forend, even though it’s a composite material, I’m surprised FX do not offer a cover. They do however, fit a nicely finished synthetic cheek piece, which sits between the face and the magazine, so more civilised than some rivals me thinks?

Pull back that slick side-lever, and the first shot trips into position- close the bolt, and we’re ready to go, subsequent cycling of the lever is quick and smooth, and shots can be released super-fast, once you’re familiar with the action. On the down side, it is still possible to double load pellets, which is irritating, but a positive, deliberate cocking motion is the answer. FX fit a 2-stage, semi-match unit to this model, and it performed well on test, with a reasonably light, and predictable release. The wide/curved blade is adjustable for position, along with first stage movement, and second stage release.

Given the claimed shot counts, I was prompted to undertake the longest chrono check I think I’ve ever done. For the record, the .177 model, from a 250bar charge, produced 609-shots! I stopped checking when residual pressure was hovering around the reg pressure, but this is phenomenal. Total spread was 34 fps, and this was the same, whether you looked at the first 50-shots or the whole charge. Reasonable figures, but not stunning for a regulated action.

So, to accuracy? This gun needs to deliver at this price point, but all I can say is; it does! FX only fit Smoothtwist barrels to their guns now, and on test, the Impact proved that accuracy was well up to the mark, with super tight ragged keyholes printing over my test range of 35 yards. Moving back to 50 and I could still print easy clusters within the size of a penny! My example was in .177, but a key feature with the Impact is that the customer can switch calibres, with a barrel change kit, sold as an optional extra. This is all done in conjunction with the power adjuster, which is the other main feature that comes as standard with this model. My test model had six power levels ranging from 6.4 to 11.4 ft/lbs on max, all selected via the large, clearly marked dial on the left side of the breech block.

Opt for the kit, and the barrel change takes just a few minutes. The butt pad is lowered via the wheel, then the barrel locking screw just forward of the mag on the right side loosened. The barrel is then pulled forward and away from the action. The pellet probe needs to be changed, by cocking the action, aligning the probe in the rear slot, and using an Allen key to remove it. A different barrel and probe can then be installed. The operation is straightforward, and clearly covered in the manual too. With all in place, the power can be adjusted to suit the new calibre. Finally, for users of the FAC version, there’s even the option to alter the Impact’s regulator pressure; something that could be useful when changing the barrel, or using a different pellet, and this is done via an Allen key into the small aperture, recessed behind the trigger.

Yes, the Impact is a comprehensive piece of kit, and FX have arrived at a unique package, for a certain breed of enthusiast.

A buddy bottle system combined with a bullpup spec is as divisive as it gets, yet whilst I’m not a great enthusiast of either, It’s one hell of a rifle! Pick up an Impact, marvel at the ingenuity, and you’ll soon be appreciating the slickness of execution throughout. The level of performance, versatility, and features makes it very appealing.