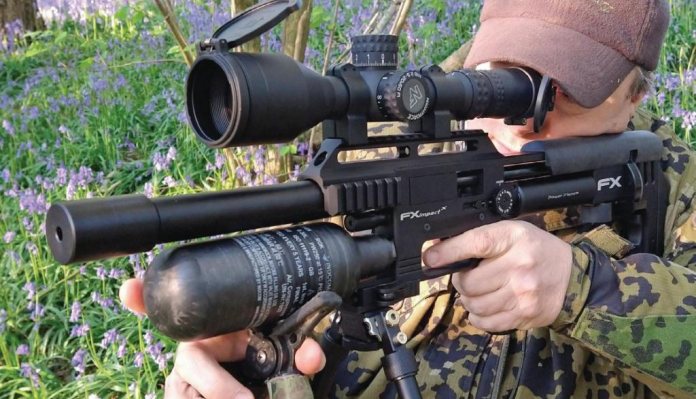 I’ve dealt elsewhere with the uniqueness of FX’s ground-breaking Impact PCP air rifle as a complete shooting system, and of tuning FAC models as the air-gun equivalent of precision-rifle reloading. So here I’m going to consider the rifle in its most radical and eye-catching variant: the Compact.

Two components give the Compact its distinctive character: a 500mm barrel and a 300cc air bottle. Length is also minimised by the use of an ultra-compact 5cm sound moderator. Standard Impacts have a 600mm barrel, 480cc air bottle, and an additional cylindrical mid-section between the base and end caps of the moderator, giving this an overall length of 12.5cm. Surprisingly, the obvious reduction in length isn’t matched in weight, where the saving is barely 200-grams. This is due to the inherently light weight of the truncated elements. The air bottle is carbon-fibre and is of course hollow. The sound moderator is also hollow, with no internal baffles. You would think this, and its tiny size, would make it ineffective, but remove the endcap and you certainly notice the difference!

Finally, that stocky bull-barrel is also mostly air, since the shroud encloses a thin STX ‘barrel liner’, centred via a series of vibrationdamping O-rings. Thus, the shorter font-end shifts the balancing point back only 2cm (though this, of course, depends on how you configure your optics and whether you add an aftermarket moderator).

The FAC-rated Impact Compact can deliver these figures for three main reasons. Firstly, although the Impact’s bull-pup configuration makes it seem short, 500mm is still a substantial tube. For comparison, a FAC rated Daystate Red Wolf runs a 430mm barrel as standard. Secondly, the Impact’s air management is both inherently frugal and uniquely tune-able for optimal performance. Thirdly, and most importantly, the FAC Impact MKII is equipped with a supersized ‘Power Plenum’ that enables the rifle to deliver serious power at remarkably-low regulator pressures, giving the main bottle pressure much farther to fall before a refill is required.

So, no difference in power or price, and not much in weight or balance, plus a reduction in shot count you can easily live with. What, then (aside from those show-stopping looks) is the benefit of Compact-ness? The obvious assumption is that the shorter a rifle is, the easier it will be to manipulate inside a hide or vehicle.

To try this out, I took the .22 FAC Impact MKII Compact out for a bit of corvid shooting from a Bushwear chair hide. First impressions were very positive. It was easy to get in and out of the hide with the rifle, and the fact that the muzzle remained well inside the opening offered an extra element of stealth in tackling these sharp-eyed birds.

The reality was a little different, however, because the bull-pup format creates an 8cm disparity between the bore and the line-ofsight and this means you can’t take muzzle clearance for granted. The practical consequence of this was that, instead of shooting the crow in my sights, I managed to shoot the hide. Worse still, I did it twice! Consequently, I had to take my eye off the target to check my muzzle before each shot, something I wouldn’t have had to do with a longer-barrelled gun. I’m just glad I was only putting holes in nylon rather than in a wing-mirror, which could well have been the case if I had conducted my initial experiment in the 4X4. There was another drawback to having the muzzle inside the hide: noise! However well that minimalist moderator had appeared to perform in the open country; in an enclosed space, one shot was enough to have me reaching for my earplugs. To be fair, the little rifle was spitting out 16-grain pellets at a more-than-zippy 1,015 fps! To be doubly fair, you can easily increase the sound suppression by buying a midsection for the FX moderator or adding an aftermarket alternative from Huggett or Donny FL, and still end up with a rifle that’s shorter than a standard Impact.

Surprisingly, the short bottle also required a small slice of my attention, as I found I had to hold it in the fork of my Primos Trigger Sticks to stop it slipping out; something I don’t need to do with a standard 480cc bottle. A further slice went to muzzle discipline. Usually assumed to get harder as weapon length decreases, the Impact Compact reminds you that proper muzzleawareness is actually trickier to maintain with a short carbine than with a pistol.

Despite appearances, therefore, the Compact takes a bit of adjusting to. This said, however, it remains an exceptionally-handy and deceptively-capable rifle. A real pocket-rocket!