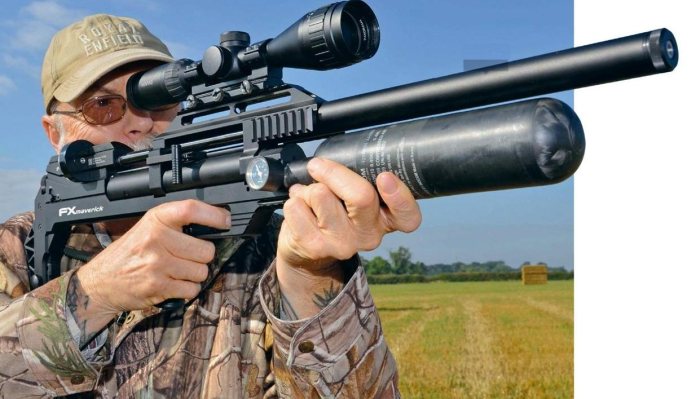 Billed as the new platform on which future models will be based, this bullpupstyle PCP comes crammed with features primarily aimed at the experienced shooter, who likes to play and tweak performance. On that note, let’s start with a warning - this airgun isn’t for the fainthearted. For those who just like to pick up the gun and a tin of pellets, and shoot, I wouldn’t recommend it! If on the other hand, you get excited at the prospect of being able to switch calibres, or even rifling twist rates within the same calibre, and can’t wait to take an Allen key to the regulator - then the Maverick is for you.

Top of the billing is the dual regulator system, and it’s fair to say, to quote FX, that the system has been developed with heavier pellets and slug ammunition in mind. I’m testing a 12 ft/lbs model here, but it really comes into its own when set to FAC power levels. If tweaking is deemed necessary, both regulators need to be adjusted in harmony, maintaining a 30-40bar difference between the first and second regulators. One of the benefits of two regulators is that there is less stress on the components, and in theory, greater consistency is possible, along with more shots per fill. FX use the term AMP regulators, standing for Adjustable Match Precision.

Another big technical plus comes with the fact that the Maverick offers the largest power plenum yet on an FX rifle - 89cc. For those unfamiliar with the term, the plenum is the final regulator chamber that delivers the shot, and here, that means that high FAC performance is accommodated when necessary.

FX has long been the master of the multishot system, and the Maverick offers slick side-lever cocking and the new style, ‘Side Shot’ magazine. Just click the front keeper bar round to the top position and the clear magazine cover pulls straight off. Wind the internal drum anti-clockwise against spring pressure, drop in the first pellet nose first to hold the drum, then fill all the remaining holes. A whopping 22-shots are available in .177 (on test), and 18-shots in .22, so plenty of firepower to hand.

One negative here. I don’t like the way
the mag comes in at a lower angle in the slot, effectively pointing down, and given that it relies on a small ‘o’ ring to create friction (that just pushes into a recess in the mag casing) and the ‘o’ ring fell out on test, it’s not the most robust design out there. Luckily I noticed and caught it, but lose the tiny ‘o’ ring and the mag will sit loose. That said, when all positioned correctly, shot cycling and performance proved pleasingly smooth, but it just seems such a vulnerable design from such a clever manufacturer!

Charging the Maverick is simple enough, via the Foster valve situated on the left side of the action. Just pull off the small dust cover, snap on the adaptor/ airline and charge the system. Given that sizeable buddy bottle, I opted for a divers bottle instead of my usual pump routine, and here, whilst you can fill to the maximum 250bar, sticking to 200bar will be less stress on components and still give many many shots per charge. Main bottle pressure shows on the large gauge on the right side.

And so to final physical adjustments. Scope mounting is via the chunky raised Picatinny rail. Set the height of the rear butt plate by slackening off the bolt and sliding it up and down. All quite straightforward. The 2-stage trigger is classic FX. It’s adjustable to a fine let off and even incorporates a neat adjustable shoe.

As mentioned, the Maverick comes with dual AMP regulators, and whilst there is only one gauge that reads reg pressure (the small gauge on the rear left side), there is a delicate process to follow, which will show both reg pressures on the same gauge in turn, as they are set up. Here’s an indication of the process involved. The second reg is adjusted via the goldcoloured screw on the left underside of the rear section and needs to be opened up fully (max pressure) to show the first reg pressure on the gauge. The first reg is then adjusted via the small Allen screw accessed under the forend rail, forward of the trigger. This is set 25-50bar above the desired working pressure of the second reg. Now the bottle needs to be loosened to empty the pre-chamber. This allows the second reg to be set and the bottle can be re-tightened to re-pressurize the system. For the record, my test gun came with the second reg running at 60bar.

So how does it?

FX is synonymous with side-levers, and the slick little number fitted here is nicely shaped and works a treat. Cycling is smooth with little effort, although, as with so many PCPs on the market, it is possible to index the next shot, yet not have cocked the trigger. Subsequent recycling puts a second pellet in the barrel. Be positive with the cocking action, and this shouldn’t be a problem.

That full-length barrel shroud actually does a good job of eating the muzzle report and the result is a muffled hiss as air dissipates, with no harshness left. If you do fancy a secondary silencer (and insist on spoiling the aesthetics), then the muzzle is threaded under the small knurled cap - ready to go. AR compatible grips are all in vogue, and you have that option here too, yet the bullpup Maverick (as supplied) feels good in the aim, both in terms of the grip, and that composite roll-over cheekpiece.

Smoothtwist barrels are now well established and fitted as standard at FX, and the last few I’ve experienced have proved very impressive. This Maverick sports the STX (Superior Smooth Twist) specification, but on test, I have to say, it proved rather pellet fussy. Yes, I got there in there in the end, with H&N Sniper Mediums in the .177 test calibre, finally drilling some serious sub 1/2” holes over 40yards, but several quality ammo samples curiously under-performed.

As for firepower, with that large 480cc buddy bottle in tow, expect 600 shots in either main calibre. So, what of the dual reg set-up and consistency? Well, using JSB Exact 8.44s, I clocked 110 shots (5 magazines) over the chronograph, with a total spread of 21 FPS. That’s good consistency, but nothing amazing. However, it should be noted that pellets were taken straight from the tin.

Remember the quick power adjuster at the rear? This can be used to reduce the power down to around 6-7 ft/ lbs at its lowest setting. Of course, a multitude of special kits are available, to allow the calibre to be switched, along with replaceable barrel liners offering interchangeable rifling twist rates. There’s even an optional Slug Power Kit, including a heavier hammer and slug pin, for this increasingly popular ammunition. In these scenarios, both regulators can be adjusted in harmony, along with the rear hammer power adjuster, all in a bid to maximize airflow and push performance.

As with most FX products, a plethora of options exist. In fact, for those prone to deliberation, the sheer choice of features, specifications and permutations, is enough to set the brain in a spin.

As stated at the start of this article, the FX Maverick is a specialized airgun, offering a unique level of experimentation and adjustment, and it’s all undeniably clever stuff. For many, it’s an unnecessary step too far, more likely to result in the user chasing their tail so to speak, in a bid to arrive back where they started. For a host of more experienced shooters though, it’s that very versatility on offer, coupled with the retro reconfiguration possible with the Maverick, which will be so appealing. One look at FX’s success in specialized outdoor competition, such as Extreme Benchrest in the USA, and it’s clear that they intend to push the boundaries of performance to the max, and it’s hardware such as the Maverick, especially in FAC guise, that will keep their flag flying.

Not for everyone then, but for those who will appreciate what’s on offer, the Maverick is well made, boldly designed and truly innovative.