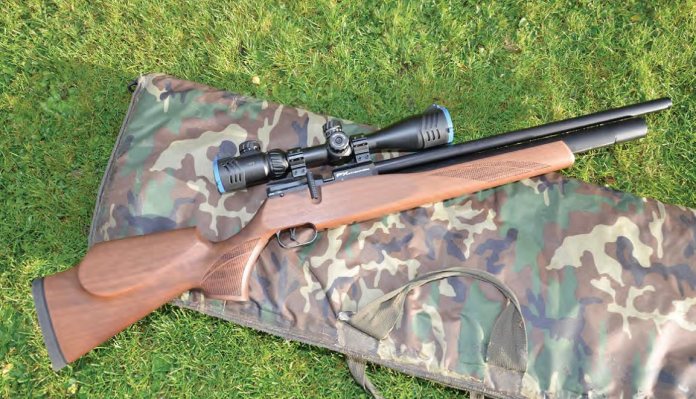 Think pre-charged pneumatic, and the list of suitable manufacturers, will be surprisingly long. But whilst there are a host of models out there and all perfectly capable, it’s fair to say that many just follow a tried and tested format. One company that genuinely stands out from the crowd is FX Airguns, based in Sweden and with the ever ingenious Fredrik Axelsson behind their operation, a steady succession of innovative and exciting designs have become their accepted norm.

FX airguns have often seemed a little expensive compared to many rivals, but over the last couple of years, several models have been introduced that have bucked that trend, such as their highly popular Wildcat model. On test here is their latest Streamline, and as the name suggests, this one keeps the visuals fairly simple and unfussy. My test model came supplied as the walnut stocked version, with an RRP in the region of £849, yet the identical action is also available complete with a synthetic stock, trimming the asking price to £749.

So, externally, the Streamline has an unfussy profile, as its name suggests, but look closer, and there’s plenty of on-board features, all designed to enhance performance. So let’s run through the specification and see just what we get for the money, and then check out how it performs down range.

Firstly, the pneumatic action is regulated, the now standard Smoothtwist barrel is fitted and shrouded, and there’s the option of fitting a secondary silencer. There’s a highly competent 2-stage trigger, manual safety catch, manometer, and of course that ultra subtle side-lever. The Streamline also comes supplied with an 11- shot magazine, and an adjustable power control. A tasty spec sheet then, so let’s get started.

Handle this model for the first time, and it’s difficult not to be impressed. I love the sleek profile, and the slim-line walnut stock of my test model, just looks and feels spot-on. The forend is unusually long for a start, and that means a relaxed comfortable hold is easy, free from contact with the metalwork. The pistol grip is nice and slim too, which should fit most hands with ease. Perfect laser-cut chequering enhances the looks and feel of both the gripping areas, whilst a smart rubber butt pad is perfectly mated to the wood.

At 6.2lbs, this model is easy to carry out in the field, but for the record, opt for the synthetic clad version, and you can trim that down to 5.7lbs. You’ll miss out on the visuals of the walnut though, and with ambidextrous configuration, it’s hard to fault. FX so often opt for a practical finish on their guns and the Streamline gets a matt finish throughout. Not as classy as conventional high gloss chemical bluing, but ideal for a hunting scenario- the natural environment for this rifle at the end of the day.

FX specifies this model to be charged to 230bar, and for safety, that’s stamped on the breech block too. A probe-style filling adaptor is supplied, and once this is screwed to the air line (be that diver’s bottle or pump), the probe is simply pushed into the inlet valve underneath the front of the cylinder. Once the charge is complete, remove the probe and twist the dust cover closed to keep the valve free from dirt.

Next we need to fill the magazine, unusually, it offers an 11-shot capacity, and is of the cassette type, similar in looks and function to the old Theoben style. With the clear cover towards you, turn the front cover gently anti-clockwise, all the way round, look to the reverse side, and load the first pellet ‘skirt-first’ from the rear, into the one visible chamber. This pellet will now block the spring loaded mechanism. Now turn the mag over, and drop pellets head first into each chamber in turn until full. Now pull the side lever back and cock the action- push the full magazine back into the breech block from the right-hand side, close the lever/bolt and the Streamline is now ready for action. At first, this process does seem a little involved when compared to the simplicity of their Wildcat model!

The adjustable power feature on this model is a great idea, and brings incredible versatility. Power can be set at three levels; low, medium and high. This is easily and precisely accomplished by just revolving the small wheel on the left side of the action to the corresponding marker. Low power is shown as one dot on the dial; medium as two and three dots denotes high. Energy levels set on my test model equated to 4, 8 and the a full 11.9 ft/lbs. All my main testing was carried out on full power, but shot count will obviously increase significantly, if the Streamline is used on low power for informal practise or fun shooting for example.

FX now fit ‘Smoothtwist’ barrels to all their models, and the Streamline also comes fitted with a full length shroud. Smoothtwist, for those unfamiliar, is a system devised by Ben Taylor of Theoben fame, where the barrel is effectively smooth bore, save for the last couple of inches that are compressed under pressure to form shallow rifling. The idea is that the pellet experiences minimal resistance and deformation along its path, but the production process is also significantly cheaper for the manufacturer.

Muzzle signature on my test rifle, seemed slightly muted by the shroud, but if you want to add a full-blown silencer for optimised, stealthy hunting, then the shroud has been designed to be easily removable. Just unscrew it from the breech block, pull clear of the action, and then fit a screw-on silencer to the ½ x 20” UNF thread exposed at the muzzle. As it stands, the muzzle report is quite slick; more of a satisfying quick snap, than a lazy rasp that comes from more the more basic PCP valving used by some manufacturers!

On test, I did find pushing the magazine cassette into its slot within the breech block was occasionally a little irritating, as the clear cover sometimes twisted out of alignment before I had the mag fully in position. It’s a small point, and once the mag is in place and the lever and probe closed, all functioned perfectly, but it’s a niggle nonetheless. Storing a spare mag in the pocket would need care on that basis, since the design is less robust than some rivals!

Once loaded up though, the side-lever cocking action is just superb. FX relieve the stock slightly around the lever, and with its perfect shape, and beautifully weighted action, this is about as slick as multi-shot cycling gets with an airgun. With 11-shots away just as quickly as you can cycle that lever; and its quick, believe me! The 2-stage semi match trigger is sweet too, and it’s a fully adjustable design that even allows for the blade to be swivelled achieving the desired angle. Those plus points are stacking up nicely then.

And so to the chronograph! From that 230bar pressure fill, the regulated .22 action on test returned 198- shots, with a creditable 22 fps extreme velocity spread (ES). I stopped at that shot number, as the gauge was showing residual pressure at just under 90bar, and that must be close to where FX set the reg pressure. 200 shots are pretty impressive regardless! I used FX’s own excellent pellets straight from the tin, but you’d be hard pressed to detect any change in trajectory with that level of consistency. As for down-range performance, I tore easy ragged hole clusters over 25 yards, then moved back to 35 yards, and matched them shot for shot. Just over ¼” c-t-c is excellent stuff, and all the evidence I needed that this Streamline was a serious tool, working at its optimum.

The more time I spent with the Streamline, the more impressed I became. It really is a highly appealing, super versatile airgun. That side-lever action alone, just puts a big smile on the face, and with the power adjuster to play with and a really comfortable stock at your fingertips, it’s a great gun just to enjoy for an extended session down at the range. But with excellent performance figures and an overall air of subtlety, it’s also capable of pretty well any task asked of it; be that precision hunting, or even Hunter Field Target.

Weigh all that up, and I reckon it’s well worth the money. Another gem then, from this most innovative Swedish brand.