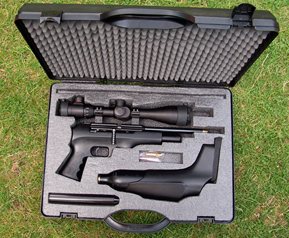 I’ve been a shooter for most of my adult life, and I’m very proud of my hobby. Shooting in all its forms is a fantastic past time, but not everyone thinks the same. There are a lot of people that consider us to be bloodthirsty killers, hell bent on shooting any wildlife that crosses our path. Other people see somebody carrying a gun bag as a potential burglary victim. Even though I live in a ‘nice’ area, I’m still conscious that every time I load my guns into the car, some scumbag walking past could be making a mental note of what I’m doing, and be planning on paying me a nocturnal visit. I try and put my guns and shooting gear in the car when there’s nobody about, even though my vehicle’s parked on my drive. Call me paranoid, but I don’t see the point of flaunting my pastime to every Tom, Dick or Chavvy out there. My gun bags are all fairly bulky, tactical style models, and don’t scream ‘look at me, I’m carrying a gun’ to the neighbours and their visitors. Oh to live in Switzerland, where you can walk across the road carrying an assault rifle in broad daylight without causing panic!

Air rifles that can be broken down into a smaller package have been around for a long time, and I own a rather nice example of one of the earliest, a Colchester Gamekeeper. The advert for this takedown rifle featured a chap leaving home with an innocuous looking case. He was off shooting, but nobody would have guessed from what he was carrying. This type of case is also a lot shorter than a conventional gun bag, and can be tucked into even the smallest of vehicles. The takedown rifle obviously has a lot going for it, but what are they like to actually use?

Fredrik Has The Answer

The Swedish air rifle company FX Airguns was set up by Fredrik Axelsson, and it produces a wide range of pre charged pneumatic airguns. One model, the Gladiator, features a buddy bottle air reservoir where the butt of a normal air rifle would be, and another, more conventional, tubular air reservoir beneath the barrel. The total air capacity is 645cc, and this massive volume accounts for the rather impressive figure of 500 shots per charge in .22 calibre. The Verminator is basically a Gladiator with a much shorter barrel (8 inches) and a vestigial forward air reservoir. The resultant package is therefore extremely compact, and as the buddy bottle is removable, the two main components can fit neatly into a purpose built, foam-lined hard case. The case is a sturdy affair, well up to protecting its cargo from even the most ham-fisted owner. The eggshell foam is pre-cut for the rifle parts as well as for a moderator and a pellet pouch. In fact everything you’d need for a shooting session in one container.

Assembling the rifle is simple; it’s just a case of screwing the buddy bottle into the back of the action. Care should be taken, as the last thing you want to do is cross thread it as it goes in, but if you take things slowly there won’t be a problem. I found that by holding the action vertically, and screwing the bottle in from below, things went together without a hitch. When the bottle is tightened fully, a hiss is heard as air passes into the rifle’s forward chamber. The circular gauge in the underside of the stock then shows the on-board pressure. The silencer, in this case a Weihrauch unit (but any ½” UNF moderator will fit), screws onto the brass thread on the end of the barrel shroud. Charging is accomplished via a plug-in charging probe. The port at the end of the reservoir lacks any form of cover, and I think this is one thing FX should address, as grit getting inside a PCP should be avoided at all cost. Charging to 220 bar only takes a minute or so from start to finish, and each trip to the diver’s bottle will give you 170 shots in .177, and 200 in .22.

The buddy bottle is covered with a rather neat, matt black synthetic shell that forms the butt, it has a slightly raised section forming an ambidextrous cheek piece and the length of pull can be adjusted via an Allen key. The butt pad can also be raised or lowered if necessary. The front section of the stock is more akin to those found on pistols, and has finger grooves moulded in and a squared trigger guard. The ‘forend’ is tiny and in use I found myself gripping the end of the air reservoir. In front of the trigger guard is a circular cut out for the pressure gauge. The whole package looks rather futuristic and wouldn’t look out of place in a sci-fi film, but once up in the shoulder, the Verminator’s a joy to use, allowing you to really become at one with the rifle. With a moderator fitted, the centre of balance is through the pistol grip - pretty much perfect. This rifle’s styling won’t be everybody’s cup of tea, but trust me, if you actually pick one up and put it into your shoulder, you’ll be an instant convert.

A Bit On The Side

The Verminator features the familiar FX side lever action which – when pulled back and returned - cocks the hammer, rotates the 8 shot magazine and loads a pellet into the breech. The rotary feed device is simple to load, and pellets are held in place by a rubber O-ring running round the circumference. To change the magazine, a pin at the rear of the action is pulled back, but care should be taken not to lose the mag in the grass, as it can spring out when the side-lever is pulled. Warning, it will also ping out next time you cock the action, if you release the mag pin thinking it’s the safety catch - I only did it once, but luckily a mate spotted it fall out. The action’s got an ace up its sleeve too, as if you want, you can let go of the side-lever and it’ll fly forward under spring pressure. This makes for an extremely fast back up shot should it be required in the field, and a lot of fun on the range against those pesky spinners. The trigger unit was set up nicely at the factory, but is user adjustable if required. A safety catch is fitted above the trigger, forward for fire, back for safe.

Some form of sight is obviously required, and Deben sent down one of the new Hawke Eclipse 30 SF models. The scope features a one-piece 30mm body, side focus parallax adjustment and an illuminated mil dot reticule. The ocular lens is 50mm in diameter and the magnification is from 4-16x power. This nice bit of glass was a perfect partner for the Verminator, and is good value at £179. The scope was soon fitted in a set of Match Mounts, and believe it or not, I only had to fire 5 shots to obtain a perfect 35 yard zero. All up weight of the combination is 7 ½ lbs, but it feels a lot less. On its first outing to the range, I fired half a tin of pellets without a problem of any kind; the action is very slick to operate, magazines are easy to change and charging is child’s play. The .177 FX pellets grouped into tiny clusters at 35 yards, and I could regularly hit mini kill targets out at 55 yards. This was obviously an extremely accurate, consistent rifle, and I was itching to get out and do some ‘real world’ shooting with it. I therefore took the neat little FX with me on my next early morning trip to the golf course.

Oh, What a Beautiful Morning

I know that when the alarm clock went off at 4 am I wasn’t too keen to leave my bed, but once I was at the course I was raring to go. The first rabbit of the day was stupid enough to make an appearance near to where I’d parked in a small copse. He was only 25 yards away when I spotted him on a green, but he hopped into what he thought was cover in some nettles. As the Verminator balances so well, and there was a tree handy to brace myself against, the kneeling shot was simplicity itself, and he went down without a flinch. The second rabbit had flattened itself on a footpath hoping not to be spotted, but at 30 yards I took the shot prone. Three more conies went down to perfect brain shots (if I do say myself!) and I went back home extremely pleased with the FX’s performance. I took it to a local farm the week after, and bagged an extremely wary crow and two squirrels in half an hour.

I’m not saying I couldn’t have done the above with any other quality air rifle available, but I really enjoyed using this rather unconventional little carbine. It handles so well, and feels so ‘right’ in the shoulder that I’ll be sorry to see it go back. FX have struck gold with this take down rifle, and I can see it becoming extremely popular in the years to come. The fact that it is rather discrete is an added bonus.