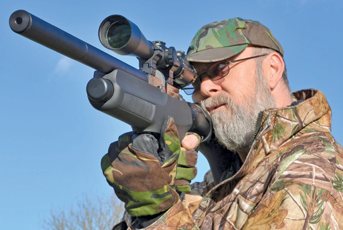 When I was asked to test this newly revised version of an established FX model, I was keen for several reasons. Firstly, FX airguns are normally unorthodox in their approach, which guarantees a quirky rifle, and secondly the original Verminator is probably the only rifle in the company’s line-up that I hadn’t previously got to grips with. This was to be the perfect opportunity to put that right.

FX are based in Sweden and with the highly innovative Freddie Axelson at the helm, they have a reputation for dynamically styled pre-charged airguns, crammed with features.

The new Verminator MKII is a buddy bottle fed multi-shot pre-charged pneumatic (PCP) with an impressive specification sheet. As for the take down aspect, the buddy bottle and main action unscrew, as well as any additional silencer. The carry case has padded cut out sections which allow for the constituent parts to be stored snugly away, as well as some extra compartments for the odd accessory here and there; and the design has clearly been well thought through.

So just what sets the MKII version of the Verminator apart from the original? Well for a start, a full length barrel shroud is now fitted, which gives the rifle that chunky ‘bull’ barrel look. In addition, and probably the most fundamental change, concerns the replacement of the old two part action, with a single piece design.

FX are the masters of black synthetic furniture, and this new Verminator sports a superbly comfortable handle, which incorporates a full drop down pistol grip in the design. The moulding is super precise, and the space age material is soft and almost warm to the touch, giving the Verminator a comforting and reassuring feel. The stylish integral trigger guard and deep fore end all add to this rifle’s stark profile, but more importantly, they feel right too.

The fairly large capacity 400cc buddy bottle sits inside another moulding; this time forming the cheek piece and butt pad assembly, and with the pad being adjustable on its axis, via two Allen bolt fixtures, the rifle stock can effectively be set to suit the individual.

It should be noted here that the prominent cheekpiece is not only fully ambidextrous, but also perfectly shaped to fully support the cheek in the aim. FX now fit their ultra smart and beautifully finished breech block from the Royale range to this rifle, and the result is that this new Verminator MKII is easily the best finished gun from the FX stable that I have encountered. The rich deep chemical blueing of the block undoubtedly adds a touch of class, yet contrasts perfectly with the subtle matt black coating applied to the rest of the action. This combined with the matt black of the stock material, and the obvious practicality afforded to this gun in a hunting scenario, should not be underestimated.

As standard, the action is fairly stubby, with a super short barrel, barely 12inches in length; sitting beneath the shroud. Whilst some of the rifle’s report is processed by venting the gases around the shroud, an additional silencer can be purchased, which having tested, I highly recommend on two counts. Firstly, its effectiveness is immediately felt, with the modest muzzle report reduced to a mere whimper, and if this gun is to be utilized in a hunting environment (its raison d’etre after all) then maximizing stealth mode must make sense. Secondly, the way it fits perfectly flush, is just a delicious piece of design work, and aesthetically pleasing in the extreme.

This is probably the point at which it should be made clear that this Verminator MKII is fitted with one of the new breed of ‘Smoothtwist’ barrels, devised by Ben Taylor, and whole heartily embraced by Freddie Axelsson. I’ve been told that FX are now fitting Smoothtwist tubes to ALL their guns, which is a bold move indeed, and certainly an endorsement of the highly innovative design. More of which in a moment.

Further attention to detail comes with the fact that the action of this Verminator is totally free floating within the stock, save for the breech block, which is a perfect set up for stable PCP performance in my book.

As with any pre-charged pneumatic, the shooter has the option to fill the air reservoir from either a dedicated hand pump, or divers’ air bottle. However, in the case of the Verminator’s impressively large 400cc buddy bottle, the practicalities of topping up the air supply dictate that a divers’ bottle is the preferable route.

Early buddy bottle designs required the bottle to be unscrewed from the action and directly connected to the charging gear. Several later designs, and this Verminator offers a quick fill option, whereby the action is charged with the bottle in situ. To charge the Verminator, the nylon valve cover needs to be pulled from its housing at the front of the action, and the air line connected via a Daystate style valve connector. The action/ buddy bottle can then be charged to 220bar. An on-board pressure gauge allows for the residual pressure to be kept an eye on too.

Trigger wise, this rifle comes fitted with an extremely good 2-stage semi match unit, which at the tweak of a couple of screws, can be fully adjusted for 1st and 2nd stage characteristics. I left it as it came, since the precise let off was very acceptable from the outset, but further alterations are best made with the stock removed.

In addition, the superbly shaped match trigger blade can itself be adjusted, so the final position suits the individual. Just slacken off the tiny grub screw, and rotate the blade around its support rod. Straight facing or off-set left or right; the choice is yours, and with additional fine height adjustment, an added level of sophistication is afforded.

FX supply the Verminator with their cassette style magazine, and whilst these can be a little fragile, once loaded and in place, they work a treat. To load the magazine, first remove it from the action, by pulling the cocking lever all the way back and sliding the mag out of its slot from the right hand side. Then with the clear plastic cover facing, twist the cover anti clockwise right round until it stops, then turn the mag round and push a pellet in backwards, into the one exposed chamber. Now the mag can be turned round and pellets pushed into each chamber in turn in the normal way. A little fiddly yes, but once filled and chambered, the system works extremely well

FX design flair continues with the way they fit these rifles with a power adjuster, allowing for three power levels, 7ft/lbs, 9 ft/lbs, or full power. I left it on high power, after checking that the new style adjuster wheel worked, and I can certainly vouch for the manufacturers figures. Lower power means higher shot counts of course, and when you consider that I recorded in excess of 350 shots on full power, this Verminator’s versatility is clearly something to shout about.

So what of that Smoothtwist technology? For those unfamiliar, it’s a revolutionary process of making barrels, by crimping (crushing) only the last few inches of the tube, and by so doing, effectively imprinting the rifling on the inside. The advantage theoretically, is that the pellet travels down a smooth tube for the majority of its journey, encountering minimal resistance in the process, and therefore expending minimal energy. The short length of fairly shallow rifling at the muzzle end is then enough to impart a twist /spin on the projectile, for a stable flight path to the target.

To date, I’ve tested several rifles with Smoothtwist barrels and not been overly impressed, but this Verminator on test, was different again. Indeed performance overall was superb. The side cocking lever is so subtle and perfectly weighted, and minimal effort is needed to cycle the magazine after each shot. The super slick firing cycle allows for incredibly fast shooting too, if required, and on test, over an extended session, I didn’t experience a single jam or malfunction, which is unusual for multi shot design

Groups of just over quarter inch at 30yds using FX branded JSB Diabolo pellets, was all the proof I needed that this new Verminator MKII was indeed capable of exemplary performance, and the confidence that this brings is a huge asset in the field, where this rifle undoubtedly belongs. Kneeling shots on test were confidently taken, given the fine balance, although standing shots, ever the real tester, would benefit from more weight at the muzzle in my book.

So if you haven’t guessed by now, I was extremely impressed with this new MKII version of the Verminator, and despite my usual reticence to get too involved with buddy bottle style PCP’s, I’m pleased to report that this gun has to be the best FX model I have shot to date. The best finished by miles, and easily the most accurate.

Flawless mechanics and loading operation is always attractive, but this really is a serious tool, fit for purpose! Still a bit pricey though, but it does have a unique feel, not easily matched by its rivals, and for that, if this style of airgun appeals, then the highly capable Verminator MKII shouldn’t disappoint. GM