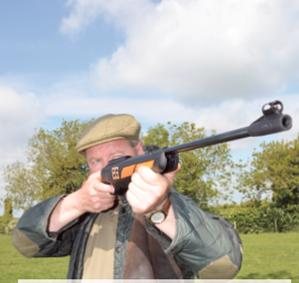 Any sport needs new blood to come through the ranks, and in that regard we all have a part to play in channelling youngsters towards airgun shooting. Getting the Xbox generation to just leave the bedroom is no mean feat, but it’s rifles such as my test gun here, that can play a big part.

Make no mistake, airgun manufacturers also have a responsibility to produce guns that will appeal to youngsters, and whilst that can mean specially scaled down models that are more manageable, it can also mean getting the visuals right.

Bear Grylls is a big name in the media, and his famous survival techniques and wholesome image are something positive to be associated with. Gamo’s tie-up with the BG brand is therefore a clever move, and should go some way to luring the more youthful shooter into their ranks

On test here is what Gamo market as the Bear Grylls Adventure Survival Set, comprising the BG rifle itself, a pack of 50 Bear Grylls Camo paper targets, and a tin containing 150 Bear Grylls Soft Point pellets. Okay, it looks the part, but how does it shape up? Let’s see…

Gamo have certainly embraced the modern age with a host of models that make use of composites and plastics for the stock. This BG Adventure model has radical looks for sure, with those positively lairy orange panels grabbing the eye; but the orange and black combines well in my book. As for the functionality, the raised panels along the grip and forend, along with the main cheekpiece section, are formed from slightly rubberised material, so good grip and added comfort are also a feature.

Gamo’s ‘Shock Wave Absorber’ system is here too, with removable rubber blocks inside the recoil pad. The idea is that these can be removed as desired to alter the recoil, and it undoubtedly looks the part. To be honest, though, after much experimentation with several Gamos fitted with this feature, I’ve never noticed much difference to the felt recoil whichever configuration I’ve arrived at. The pad itself is at least quite soft on this model, so it must be absorbing some of the kick.

The integral trigger guard is plastic, as is the main section of muzzle assembly, but everything is well-formed and precisely moulded. There’s also enough metal on show, and a sufficiently high level of finish to give a satisfying impression overall. Bluing to the barrel and main compression cylinder is evenly applied, if a little dull, whilst a metal rear-sight and foresight hood all help the cause.

Any gun designed to appeal to juniors needs to be manageable in every department, and here the BG scores well. Breaking open the breech can be an awkward task these days, with many of the current crop of break barrel guns surprisingly stubborn in this regard. No such problem with this model. Indeed, cracking open the breech takes hardly any effort, whilst the cocking stroke itself (admittedly not the smoothest) requires only modest effort. It pays to push home the pellet until it’s totally flush in the breech however, to avoid ammo being crushed as the jaws close.

Given this model’s intended target customers, I decided my initial testing would be conducted using the open sights provided. The rear sight is a neat compact design, and the combined sight picture, of the front red fibre optic between the two green rear fibre elements, works well. That said, it’s a fairly daft omission, having no marked numbers on either the windage or elevation finger wheels.

For the record, the trigger on this BG Adventure has a plastic blade and a manual safety catch. It’s a pseudo two stage affair and, as such, classic Gamo. Basic adjustment to the length of the second stage is possible, and the overall pull weight is perfectly acceptable, with a well-shaped blade into the bargain. Firing the action is quite noisy, with plenty of twang, but there’s a distinct feeling that the rubberised panels of the stock grips are playing their part in dampening some of the natural recoil, along with the soft pad itself.

Performance-wise, over 10 yards, after zeroing the sights, I printed several ½ inch groups using the BG Soft Points supplied, which instantly won me over. Moving back to 20 yards, and still with open sights, the same pellets kept within 1.5-inches, which for plinking, is ideal.

I should point out that at 5.8lbs this model is a relative lightweight, and it handles really well, with little effort.

For a full evaluation, and with a scope now firmly clamped to that chunky sight rail, I moved back to 30 yards; at first persevering with the BG Soft Points to see how they would fare. Fairly good groups, spoilt by the odd flyer, told me that I wouldn’t be doing this gun justice unless I tried some better quality ammo. Air Arms Diabolo Field pellets slashed the centre-to-centre groups from around 2 inches down to 1 inch clusters, and whilst many other brands, including several cheaper ones, will no doubt perform, the Diabolos did at least show what this rifle was capable of.

As I stated at the outset, encouraging newcomers, and particularly juniors into our sport, is fairly vital. This vibrant Bear Grylls Adventure Set from Gamo, may be fun, but what has to impress is the genuine performance capability at its heart. The future’s bright, the future also appears to be partly orange!