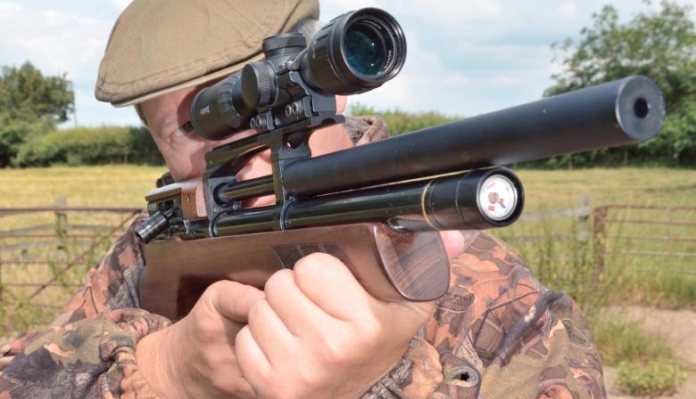 The Coyote, introduced around five years back, was Gamo’s first foray into the world of pneumatics, and made full use of the Spanish giant’s group tie up with BSA. Better late than never, as they say, and that also goes for Gamo’s approach to the bullpup market! For what we have on show here is the Gamo Boxer; one of the flurry of new models from this most prolific of airgun manufacturers.

The bullpup concept, where the gun’s entire action is placed right at the back of the stock, results in an incredibly compact air rifle, that puts a unique spin on handling. Not to everybody’s taste unsurprisingly, but this radical configuration seemingly gains ever more fans each passing week. Indeed, as Gamo register their interest, and throw their hat in the ring, so the number of major manufacturers who are yet to participate, diminishes.

So just what do we get for our £569? Well for an impressive start, each Boxer comes cosseted in its own plastic hard case, which has actually a quality unit, with a robust feel, deep foam filling, for proper protection, and plenty of space – unlike some rival’s efforts. The specification includes full length Whisper Shroud, BSA barrel, adjustable two stage trigger, quick fill charging, 10-shot magazine, side bolt cocking, integral manometer, manual safety catch, chequered beech thumb hole stock, and rubber buttpad.

As mentioned, with Gamo’s connection with BSA, marketing strategy comes into play. Indeed, consider BSA’s high-end Defiant model, and the Boxer, laid alongside, looks rather familiar, with similar proportions, and stock configuration. That is where the similarity ends though, since the Boxer is deliberately unregulated, to keep costs down, and the beech thumbhole stock is made in house by Gamo, rather than farmed out to industry favourite Minelli. This again, saves big bucks, and whilst the stock is perhaps a bit plain, it does the job perfectly well. Plenty of attractive grain pattern is on show from the beech, and with a smart matt lacquer applied, it feels and looks the part.

The rubber butt is nonadjustable but does the job.

BSA manufacture most of the action in the UK, and that means that this model gets one of their increasingly popular cold hammer forged barrels. The barrel and main cylinder get the full chemical bluing treatment and look the part. Contrasting nicely is the matt black Whisper Shroud, and the black anodised mounting rail. Bullpups require the scope to be mounted over the barrel, rather than the breech block, and it’s this raised ‘Intermount’ that does the job. A higher than usual sight line is the result, but that’s part of the price paid for the BP configuration.

Gamo specify the Boxer’s fill pressure as 232-bar, and this is via the push fit quick fill probe. Just pull off the plastic dust cover at the front of the cylinder, insert the airline/probe, gently fill the cylinder, taking care the probe is seated throughout, bleed the line, and replace the cover.

Now we just need to fill the mag, and we’re away. Gamo utilise BSA magazines for this model, and that sees a colour coded internal drum, to signify calibre. I had .177 on test, and that’s blue. .22 is red. Push pellets in headfirst into each chamber, twisting the drum anti-clockwise after each, until full. Pull back the bolt to cock the action, insert the magazine from the left side into its slot within the action, close the bolt and all is ready. Gamo’s use of a magnet means the magazine is literally pulled into position within the breech block, as its small hole locates onto the stud; and it’s all very neat and reassuring in use.

Shoulder the Boxer, and that classic bullpup weight distribution is immediately apparent. Ultracompact dimensions, and the action at the rear, puts all the weight right in your hands. Fast to shoulder, and very ‘pointable’. Choose to shoot from inside the confines of a vehicle, or a hide, and these qualities really come into play. I still have to voice my concerns about this style of bullpup in general, where the breech area ends up near the shooter’s face, but that is a criticism aimed across the board, and not just the Boxer. The slick cheekpiece still feels comfortable on the face, despite holding the 10-shot mag half-way along.

Any fair assessment of the Boxer however, has to point out that, it lacks the sophistication of some rivals, in one main area – the cocking system. Take a look at the BSA Defiant, and that slick central side lever allows for the gun to be cocked whilst still mounted in the shoulder. By comparison, the Boxer has a short side lever, right at the back, which is quite stiff to operate. Cocking effort is quite significant, or was on the test model, and I found it almost impossible, and certainly not practical, to cock the action, whilst shoulder mounted. Admittedly not the end of the world, but worth pointing out. The Defiant and the Boxer are of course deliberately marketed towards a different audience, and this is reflected in the huge price differential. Muzzle report with the Boxer is fair. It isn’t whisper quiet, despite Gamo’s ‘Whisper Shroud’in place but there is no harsh crack to speak of. As for the two-stage trigger, my test gun came set with a reasonably light release, but a small amount of creep, so for the duration of my test, I left everything as delivered. With my trigger hand on the grip, I have to say that I feel the trigger could be, firstly, slightly longer, and secondly, a flatter blade. As it is, it works, but it’s a little stubby and unrefined.

Cocking and loading unusually fast during an extended session on the chronograph did highlight that it was possible to cycle the side bolt, index the next shot, yet not have actually fully cocked the action to set the hammer and trigger. Subsequent cocking of the bolt then allows a second pellet to be chambered. Again, this is a problem with several multi shot PCPs on the market, and hardly confined to Gamo, but it is irritating. As usual, adopt a deliberate positive cocking stroke, and you will soon become familiar with the feel of the action, and be happy that all is ready.

Settling down on my test range, it was time to see just what the Boxer could do. As mentioned, the Boxer is unregulated, and this is a deliberate move to keep the costs down. And for that reason, my shot count figures are broken down, into the initial super consistent band, and the more general picture, with the larger shot count, but also taking into account the resultant power curve as the residual pressure tails off towards the end of the charge.

Velocity testing was clocked using BSA Red Star domed pellets, and this returned the first 50 shots all within a total spread of 19fps, which is spot on. Stick to this, and the Boxer could take on an HFT course, or be well up to hunting duties. Stretch the shot count to 90, and the total spread was 38fps on test. Power was set a bit low for my test gun, and 10ft/lbs was the max on offer, with several pellet brands. Some heavier pellets would undoubtedly up energy levels slightly, but a competent gunsmith could tweak things to nearer our useable limit for more practicality in a field scenario.

In terms of accuracy, on test, lighter Exact RS pellets came out clearly on top, of the few brands I tried, yet the magazine didn’t seem to like the shorter body of this design, with them proving fiddly to chamber. A gentle nudge and a seat with the following pellet each time though, until you can see the mag has full clearance to revolve, and all should be fine. I adopted this procedure and had no further problems.

As for the target card, over 30-yards, and from a rest, the BSA Red Stars which I used for the chrono figures, returned satisfying 3/8-inch groups c-t-c, whilst the RS’s printed a tight ragged clover, that could support a pellet! Superb, benchmark stuff! Sub half inch groups were fairly easy for me kneeling at the same distance, but unsurprisingly, standers proved more challenging.

Personal taste can never be underestimated, and the bullpup configuration is as divisive as it gets. Yet if this ultra-fashionable and overtly functional style of airgun appeals, then the Gamo Boxer certainly has much to recommend. It’s nicely made, well finished, and if my test gun is anything to go by, consistent and superbly accurate – all for a fraction of some of its more flash rivals. It’s hardly perfect; even a little unsubtle in places, but terrific value for money nonetheless.