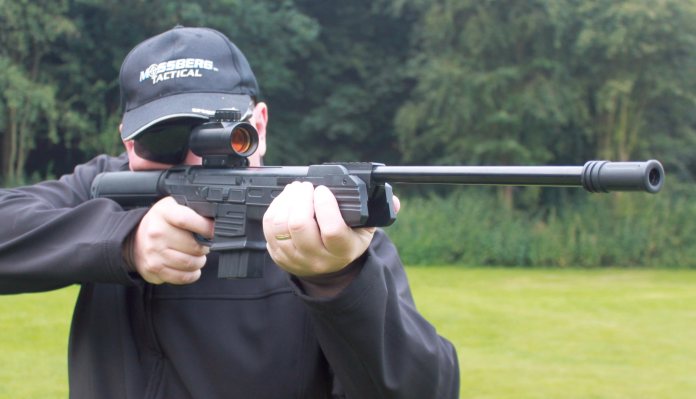 Being a very recent convert to ‘Black rifle’ shooting I was intrigued by the new Gamo G-Force Tactical. It is a break barrelled spring powered air rifle that is styled to resemble an AR-15. I have a lot of air rifles and have always liked the look of ARs; I already own a BB firing gun that looks like an M16.

The steel action of the G-Force Tactical is held in a very robust synthetic stock, which is black of course. The rear of which really looks like an ACE butt stock which you can fit to the AR platform. It even has a false mag moulded into the bottom of the stock in front of the built in trigger guard. In fact the stock has what looks like an ejection port cover and a safety catch from an AR type weapon. It will no doubt appeal to the generation of Call of Duty players who will like the idea of an airgun that looks like a ‘Black rifle’.

Back to the airgun side and the gun is aimed at the junior market, as it is a sub six ft.lbs. rifle and, as such, is perfect for a youngster starting out in shooting. The rifle is light and the pull length, or distance from the trigger to the butt pad, is only 310mm, making it more useable for smaller framed people. Another thing Gamo have done to ensure ease of use for the new shooter is the inclusion of a red dot sight with the gun. They provide a Gamo Quick Shot 30mm red dot sight with an 11mm clamp and for a new shooter the red dot is a very good choice – they are easier to use than open sights as you do not have to line up front posts with rear notches. Scopes can also be tricky for novice shooters when it comes to getting the eye relief right, they tend to try and put their eye’s right up to the back of the scope – not good with a recoiling rifle! A red dot has no eye relief issues and you just have to put the red dot on the target and pull the trigger. The sight has two clamping screws which can be tightened with a coin, very handy. The gun has no open sights but does have an 11mm scope/red dot rail cut into the top of the steel action.

The gun has a manual safety catch that works as well as the false one moulded into the stock. The actual working safety is a small curved lever sitting in front of the curved trigger blade itself and pulling the lever back towards the trigger sets it on safe. The gun is also fitted with an anti-bear trap device so the trigger cannot be operated when the rifle’s barrel is not in firing position, making it very safe for new shooters. There is an S and F on the stock above the trigger guard to help shooters know what state the gun is in. I would recommend applying the safety before cocking and loading the rifle.

The breech seal is on the action and a 4.5mm (.177) lead pellet can be put in the barrel on cocking. The safety can be taken off with the trigger finger by pushing the lever forward away from the trigger. The trigger weight is heavyish at 1.9kg, but a starter rifle is the last place you want a light trigger, so you definitely want a safe one.
Testing the Gamo’s power over the chronograph produced 4ft.lbs. of power with flat headed match pellets. Again this is not a full powered hunting rifle and the power levels suit informal plinking and training in the average back garden (with a safe backstop).

The stock is ambidextrous and the pistol grip is thin enough for smaller hands. I still found it comfortable to shoot and the false magazine proved an ideal place to hold the gun as I do on my own .22lr semiauto AR. You can see in the pictures how much the Gamo does resemble an AR, even a tricked up AR like mine.

The end of barrel has a muzzle brake, again made to look like an AR brake, there are however no slots or vents in the moulded plastic piece. The stock even has angled front action screws, a modern feature of recoiling spring powered air rifles. The screws are modern too being of the Torx variety rather than Allen or slot head.

The ACE-like butt stock has a thick rubber butt pad at the rear, but unlike real ARs it is non-adjustable. Do not be put off by that as the gun’s ergonomics are good, the position of the red dot sight can be moved along the long rail to suit all frames and builds. Recoil is minimal with the lower power levels and what there is generated is tamed by the 25mm vented rubber butt pad.

I tested it for accuracy at six yards after setting up the Gamo 30mm red dot sight. Having a larger 30mm lens does give you a better sight picture, also I prefer the tube type opposed to the reflex type red dot with a screen which can be very hard to see in bright sunlight conditions. The sight has adjustment for windage and elevation of one click to one inch at 100 yards. With 11 brightness settings the sight is not just a thrown in cheap deal here, this is a good sight.

Accuracy was excellent and sub-10mm groups are easily achievable at six yards once you tune in to the trigger sear release. I would use this as a plinker for myself and certainly a good gun for training young shooters, including my own.

I really rate this gun, in terms of build quality and performance the price tag seems very, very low, especially when you throw in a quality 30mm red dot sight as they have done; couple all this with an air rifle that looks like an AR and you have a winning combination.