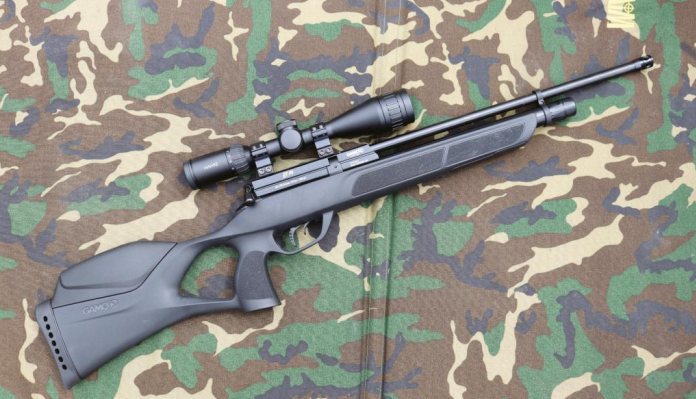 As I’ve mentioned in the past – it’s hard to disagree with the statement that Spanish airgun manufacturing giants Gamo got it right from the outset when they tentatively put their toes into the PCP market with the launch of their first production multi-shot PCP – the Coyote. The original being a beech stocked model, with a height-adjustable cheekpiece that was soon followed by a synthetic model; the Tactical, a rifle which, unlike the original, boasted a generous thumbhole layout.

They then went on to launch a rifle in combo format known as the Phox Pack (now the Phox Silenci Rifle Pack) which includes a synthetic stocked, multi-shot (MS) PCP designated the Phox, 3 – 9 x 40 scope, mounts, interchangeable silencer, gun bag and hand-pump. Some presume the gun in that pack is a Coyote under a different name, but it isn’t! In actuality, it’s quite different in design to the Coyote synthetic. However, the Phox certainly has formed the basis for the rifle here on test, the Gamo GX-40, as although it does look quite similar to the PCP it’s based on, it’s a model with a character and attributes all of its very own.

Now, the reason for this rifle’s inception is to offer the public a new PCP with many likeable qualities that its predecessors display, but the fact you can purchase this gun by itself obviously means that you’re able fit a scope and silencer of your choosing. In that respect, Gamo now bring us something that features all they can currently now offer in PCP technology. It’s one with enough differences in overall design from its predecessors, that makes it both highly desirable and one that will benefit from the personal touch of the individual shooter in respect of ancillary kit they choose to add. Read on…

Gamo are definitely no newcomers when it comes to the design and manufacture of synthetic stocks. In fact, the company were undoubtedly one of (if indeed not the first) of respected airgun manufacturers in mainland Europe, who seemingly concentrated their efforts in honing this manufacturing process to the standard we take for granted today. Obviously and as a result of their efforts, many other manufacturers have followed suit, which has resulted in the material used now becoming very well established and accepted by the shooting public in general. This is proven due to the amount of other brands and models of airguns now available in synthetic furniture, or it being offered as an option. However, I digress; so, back to the design of the handle.

The GX-40 stock follows the company trend by way of being ambidextrous and features a well-defined and high cheekpiece with a slight hogs’ back design. A thick, ventilated black rubber butt pad now takes the place of the company’s usual and once-trademarked SWA recoil reducing design. Obviously, the latter isn’t required because any PCP is inherently recoilless. Even so, the pad in evidence is generously sized and slightly contoured, making it the ideal base for the rifle to sit neatly and comfortably in the shoulder.

Behind the slim neck and steep drop-down pistol drip, is a generously sized thumb hole while moving forward there’s a nicely sized, integral trigger guard before the forward section. The build carries on into a medium length forend that is slim and straight with an angled back, rounded off end tip. To aid grip, there are two panels of fine stippling on either side of the forend and a single large panel wraps around the rear and aside of the grip.

A neat, stainless-steel collared air gauge or ‘manometer’ sits on the very front of the strengthened steel air reservoir, while the fill point is hidden and protected underneath a black plastic, friction-fit front collar/sleeve that prevents the ingress of dirt and grime. This needs to be fully removed (pulled forward and off reservoir) before you can use the QF fill probe, which of course is supplied. Then, it’s a simple case of inserting this into the front side fill port hole and injecting the rifle with a 232bar fill of compressed air as recommended by the manufacturers. This returns approximately 70 full power shots in .177 and 80 in .22 calibre, as per rifle on test.

Here, I feel I must add it’s at this stage after handling and charging the rifle, it’s all too easy, especially when you look at the skinny stock and slim air reservoir, that the GX-40 does appear to be a tad flimsy. Now, after years of experience of airguns of all types, I’ll wager that its looks are certainly deceptive and no indication that strength and integrity in any area have been compromised or sacrificed for the achievement of manufacturing a very light and slim rifle. Gamo do seem to have a knack of producing lightweight mechanical and PCP guns and, in all the tests I’ve undertaken, I’ve never experienced one to be found wanting by way of being field worthy or reliable.

So, now to the action. The cocking bolt has a finger-friendly, flat-ended teardrop handle, which feels good in the hold and operates positively and smoothly. Also, the more you use the rifle, you appreciate its shape makes the handle easy to ‘pick up’ on operation. However, I’m getting ahead of myself, as once drawn fully rearward, the rifle is cocked and at this point you can access the familiar looking 10-shot magazine.

As you’d expect, there’s no surprises here, as the GX-40 uses a version of BSA’s tried and tested 10-shot, removable, selfactuating magazine. To recap: the feed systems that Gamo use also (like BSA’s) have a colour-coded, high impact, polymer inner rotor. The colour denoting the specific calibre – those being blue .177, red for .22. Also, at the top on the exposed area of the ridged outer edge of the rotor, the chambers are numbered, so that you can visually keep check of your ammo supplies. I also like the latest addition to the design, this being a small circular aperture towards the bottom left of the face plate that shows a white dot when you’ve come to your last shot.

However, and unlike the BSA unit, the Gamo magazine doesn’t have a manual retaining catch on the action to hold it in the housing, rather it’s held in situ by a very strong magnet. These are revealed and clearly seen at the sides of the loading well. Here, two slightly protruding metal side plates help guide and of course hold it securely in the left of the action block.

It’s worth noting, we all seem to take magazine systems for granted. However, this is only because the tried and trusted mags found in popular, multi-shot air rifles bears testament to the fact that the R&D that goes into them is an ongoing process. In that respect, both BSA and Gamo should be praised that they’ve got their systems running at an all time high.

Once again, another very praiseworthy feature is the company’s SAT2 trigger mechanism. This 2-stage adjustable unit features an in-guard manual safety blade set forward of the well curved main blade. The unit cleanly releases shots without a hint of creep and, while the nicely styled lever offers a comfortable finger feel, the safety is of such a size and so positioned that it’s easily operated by the trigger finger.

The stock’s integral safety guard is now of a much more rounded design, helping give the rifle a look of hardware that’s built to help far more than hinder any operation at this area. Although the gun boldly bears the words ‘Made in the E.U.’ on the action block, I’m now pretty certain that the 18” long ‘Cold Hammer Forged Barrel’ that’s strengthened by a synthetic band, could well be the same tube fitted to many a BSA air rifle.

A stylish, small ported muzzle break protects the barrel’s ½” UNF standard screw cut muzzle thread, and, for testing, I spun on a Umarex K3 Neo Silencer. Obviously, the threads will accept any popular can of choice. But I opted to use the K3 due to its compact dimensions and prior use on other PCPs has shown me how efficient this compact moderator is!

A lightweight rifle, such as this, also requires a sensible sized optic, in this case I decided on fitting a Hawke Airmax 4 – 12 x 40AO AMX. This was soon secured onto the uninterrupted scope rails on the lengthy action block using Sportsmatch high mounts. These gave a very comfortable head to eye alignment due to the rifle’s high cheekpiece. After setting a 25yd zero, shooting from a rested position, I was soon producing ragged sub ¾” groups using any quality ammo out to 30-35yds. And of course, muzzle report wasn’t an issue, as the neat and compact K3 can once again did a very fine job of taming report.

The Gamo GX-40 is a very nice little lightweight, fast handling, accurate all-weather hunter and can stand up to/ against anything in the PCP world carrying a similar price tag. Hopefully, it’ll not get overlooked, as their will be those waiting to get their hands on the company’s bullpup, the Boxer. However, having said that, some shooters might find the GX-40 to be a tad too on the ‘skinny-side’ for their liking. Even so, you can’t deny it’d make an ideal rifle for those of a smaller build or younger guns who are looking to step into the PCP shooting arena.