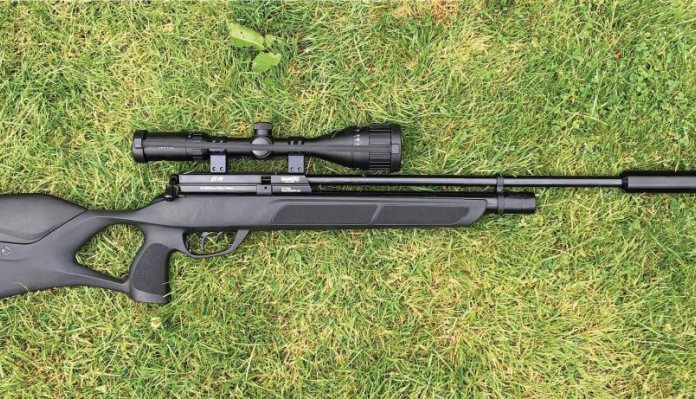 The Spanish company, Gamo, has been operating for well over 100 years; in fact, they first started making a range of lead products back in 1889.

By the mid-1900s, airgun shooting was becoming ever more popular in Europe, so, in 1950, the decision was made to start producing airgun pellets; it was then a logical step start making airguns to shoot their pellets! It was a clever move (in 1961) as they were now producing pellets to shoot in their airguns and airguns to shoot their pellets – perfect! The airguns were well made, with interchangeable parts and most importantly, they were affordable, so they quickly became popular in Spain and throughout mainland Europe. By 1963, they were exporting to the UK and one of my first air rifles was a rather elderly, but still accurate, Gamo break barrel. In 1970, Gamo were exporting to over 40 countries and by 1982, they had moved to larger premises, where stocks were also made. I’ve been to the Gamo factory and it’s huge and they make vast numbers of airguns every day; in fact, they make more airguns in a week than a few UK companies make in a year! They are said to be the largest manufacturer of airguns in the world and now sell to over 90 countries.

Well, that’s the history of the company and it’s fair to say that they are famous throughout the world for their spring piston and gas ram rifles and their huge range of CO2 pistols; however, things stepped up a gear in 2015, when they introduced the Coyote pre-charged pneumatic (PCP) and it was an instant success, thanks, in no small part, to the fact that it was built in collaboration with their sister company, BSA Guns of Birmingham.

The first of this Gamo duo on test, the GX40, has the same action as the Coyote that I just mentioned, in that it has the traditional ‘barrel over air cylinder’ layout that will be familiar to any modern air rifle shooter. The action is made in BSA’s factory in Small Heath and has one of BSA’s famous hammer forged barrels – that’s the accuracy sorted then! The exhaust valving and hammer are housed at the rear of the air chamber and the inlet valve is to be found at the front, along with the pressure gauge; yes, some say that it’s maybe not the best place for it but we really should be trusted not to check the fill pressure (which is a maximum of 232-bar by the way) with a loaded gun pointed at our face and, anyway, it’s easy to see the face of the gauge and its needle from a slight angle, so it’s not such an issue after all! The fill port is covered by a removable plastic cap, which keeps dust etc. out of the internals.

The front of the cylinder has a ‘figure of 8’ barrel support, which gently holds the nicely blued barrel; it’s not really there to give any real support but stops anything being damaged should the rifle be handled poorly. The barrel, at 18½-inches, is quite a bit longer than the cylinder and gives the GX-40 the look of a fullbore sporting rifle. The business end of the barrel is thread ½-inch UNF, so any ‘standard’ moderator can be fitted and a handy, screw-on cap is supplied to protect the thread; it’s ported but this is more for looks really, as it’s not really a ‘muzzle brake’ as such.

This neat little Gamo utilises BSA’s 10-shot, rotary magazine and it’s a very reliable, ‘selfindexing’ unit that needs no real introduction – if it’s good enough for BSA’s top of the range PCPs, such as the Gold Star and R-10, it’s certainly good enough for this little carbine! Pellets are loaded one at a time into the mag’s inner ‘wheel’ and the rotor is turned against spring tension to reveal another chamber until all 10 are filled. Once loaded into the rifle and the bolt cycled, a pellet is fed into the barrel and, once fired and the bolt pulled back, the inner wheel rotates to offer up another pellet. It’s a simple yet effective system and there are no other components needed to make the mechanism function, like on some other company’s PCPs. Magazines are simply pushed into the aperture on the left of the action (after the bolt has been withdrawn of course) and it’s retained by a magnet in the black anodised breechblock. The magazines have numbers around the circumference of the inner wheel and a white dot appears in the body when the last round is available. The one with this rifle is blue, as it’s in .177 calibre, .22 versions are red. Incidentally, no open sights are fitted but there’s a 7¾-inch section of uninterrupted dovetail for mounting an optic on top.

The bolt action is slick and smooth and the handle itself is easy to grasp and operate. Once a pellet is loaded, the safety catch can be applied and it’s to be found in front of the trigger blade; it is pushed to the rear for safe, where it also gets in the way of normal trigger finger positioning, so you know that it’s been applied and, when the shot is to be taken, it’s just nudged forward. The trigger is actually quite sweet, especially considering that this is not an expensive air rifle, and shots are released nicely.

One thing that I really like about the GX-40, and there are many, is the ambidextrous, synthetic thumbhole stock; it’s well-made and has moulded-in gripping panels on both sides of the slim forend, as well as on the upright grip. The grip fits my hand well and I like that it’s almost vertical; the thumbhole is very generous and the trigger guard is part of the stock. I thought at first that the cheekpiece was adjustable, as it has a pronounced line around it but there is in fact no adjuster present but I guess this would have pushed the price up quite a bit – maybe Gamo will offer this at a later date, on something like a ‘GX- 40 Deluxe’? It’s not a problem though, as the nicely contoured cheekpiece provides excellent scope/eye alignment with most scopes. There’s a ventilated black rubber buttpad fitted and the overall look and feel of the GX-40 in the shoulder is very nice and those gripping panels really do a great job. The GX-40 was very consistent over the chrono and provided around 100 ‘perfect’ shots. The best thing about the GX-40 isn’t all the above impressive features, it’s actually the very affordable price of only £379!

The GX-40’s sibling (I don’t know what gender airguns are, I’m afraid!) the Venari, which is Latin for ‘hunter’, shares many features but comes as part of a ‘package’, in that it’s supplied with a 3-9 X 40 scope, a one-piece mount, a slim moderator and foldable, adjustable bipod legs that can be attached to the sides of the forend using the sections of Picatinny rail. If you want to remove the legs, you just undo the clamp on the top of the unit.

The Venari, which is priced at £449, has the same length barrel as the GX-40 but a longer air reservoir is fitted and therefore produces more shots per charge; the rest of the action is the same, however. It’s the stock that really sets this apart from the carbine and it is once again fully ambidextrous and made from polymer. It has a more conventional layout though (i.e. not a thumbhole) but I love the way the forend ‘flows’ into the inbuilt pistol grip. It’s a really elegant curve and it almost swoops down to form the front of the guard – well done whoever designed it! There are full-length gripping panels on both sides of the forend and also underneath and at the rear, the cheekpiece is adjustable for height by loosening the grubscrews on the right of the butt. The rubber buttpad has three removable inserts made of softer material and they can either be left in place or taken out to produce a softer overall pad; personally, I just kept them where they were!

I took both the Venari and GX-40 to the range, so that I could do a good old fashioned ‘compare and contrast’ exercise. On the range, both rifles were very accurate with a variety of pellets but really loved JSBs and H&Ns. I obtained 110 shots in the sweet spot of the charge, which is pretty good for the slim reservoir. The Venari, using the supplied moderator, was obviously quieter than the GX-40 with only the muzzle cap fitted, but things obviously quietened down when I fitted a moderator. The GX-40 handles really well and I enjoyed shooting it; the Venari obviously felt a bit heavier due to the added weight of the bipod legs but it really paid off when shooting prone, due to the steadier position it offered. Both are more than capable of target and vermin work; so, at the end of the day, it’s down to personal preference and budget I guess. Me? Well, I’d probably opt for the GX-40, as I prefer the thumbhole stock. However, there are a few more shots available from the Venari and there’s a scope, mounts, moderator and bipod thrown in for only an extra £70 or so!

Okay, maybe the choice isn’t quite so clear cut after all. They both shoot well, thanks to the hammer forged barrels and consistent actions, have decent triggers and smooth bolt actions. However, what I do know, is that both are well worth the money and will give years of accurate service!