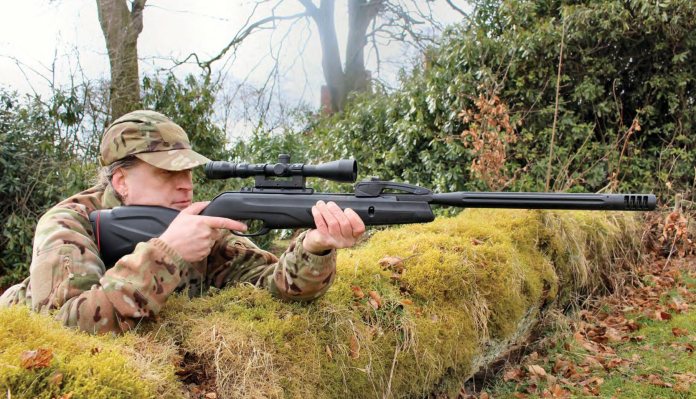 To say multi-shot mechanical action air rifles are thin on the ground would be an understatement; so, when Gamo released the original Maxxim Elite early last year, the press and public were rightly very interested to see how it’d perform. It met with critical acclaim, so now Gamo have released a model based on that unique rifle’s action, which brings me to the rifle here on test, the Gamo Maxxim Elite Tactical.

The action sits in a fully ambidextrous, black synthetic stock and one that differs greatly in design from the original hardwood stocked model. As many know, the original also has a height adjustable cheekrest; the reason for this is because the scope needs to sit high on the action, to give a clear sight line above the autoload mechanism, so it helps with eye-scope alignment.

The ‘significance’ and ‘affect’ the omission of this feature ‘can have’ will be mentioned quite soon… Gamo have used their now familiar SWA (Shock Wave Absorbing) rubber butt-pad with a red line spacer. It earns this title due to the ability to remove one, two or all three of the slide-out rubber blocks that allow you to tailor the ‘flex’ to suit your preference. You can leave it as it is but it’s there if you feel you could benefit from it. The medium height comb has a blocky ridge on either side that follows its contour, thus offering a useful cheek rest; so, some shooters won’t feel a height adjustable unit required.

The neck and steep dropdown pistol grip are equally slim but above and level with the integral trigger guard the forend fills out slightly as it tapers slowly up to end in a rounded off angled back tip. While there are two panels of raised stippling at the grip, there are two lengthy raised panels along either side of the forend. Plus, fluting runs along the full length of the top giving another grip aid for your fingers.

For scope mounting, Gamo have given the Maxxim another feature, this being what they term the ‘Recoil Reducing Scope Rail’ or RRR as it’s known. As its name suggests, this unit reduces recoil, specifically ‘felt-recoil’ or the ‘stress’ of it that could be transferred to an optic mounted in normal cylinder cut dovetails. It achieves its objective due to it having a two-piece aluminum build, separated by dual polymer struts, these absorb the shockwaves.
Talking of optics, a Gamo 3-9 x 40 scope is supplied, with a one-piece, high scope mount. When in situ on the rail, it’s just at the right height that the auto-loading mechanism doesn’t obscure your view and/ or cause concern with parallax.

Now, we come to the autoload mechanism itself, which sits high up front on the action (covering the breechblock) its long synthetic moulding being a key unit to the operation of the rifle. The unit begins at its ‘pivotpoint’, directly behind the ‘barrel shroud’, from where it arches up and reaches back over to cover the point the barrel meets and seals with the breech when closed. Interestingly, all this unit, including the 10-shot magazine when in its housing actually, ‘sits’ outside the rifle action when the rifle is in the closed position.

So, now to the nifty’ bit – how it actually manages to transform the gun into a multishot. First, you need to remove, load-up and re-install the selfactuating cassette type magazine. To enable this, you first need to slide back the retaining catch positioned on top and directly behind it, then grip the magazine on either side with your thumb and forefinger (the top sides are serrated) whereupon you can lift it up and out of the housing in the main unit.

With the magazine now facing you, you can clearly see there’s an ABS rotary inner drum housed inside the black ABS carriers casing. This is both numbered and (calibre) colour coded, and for loading you can clearly see the ‘loading aperture’ positioned bottom centre. To fill, you turn the drum anti-clockwise, against spring tension, until it comes to a stop. Pellets are then inserted through the loading aperture in the magazine casing as the empty chambers appear as you let the ‘drum’ return under your control, until all 10 are filled. The magazine is then returned into the housing and you will hear it click into place as you press it downwards, held securely by two rods. The number of shots left is clearly indicated by the number you can see at the very top; plus, a white dot appears in an aperture in the rearward face of the magazine, to indicate the ammo store is empty.

Breaking the barrel to cock the rifle also activates the ‘handsfree’ loading procedure, because at this point a probe takes a pellet from the magazine and directly loads it into the barrel. You don’t see any of this, as the magazine is obscured from view; however, you will note the barrel rises into the auto-load mech synthetic shroud; looking from below, you can see the wedge shape detent lock, but the barrel is now out of sight being ‘primed.’ On return, the barrel locks up solidly at the breech and the auto-load mech returns to sit above the breech as before. Gamo’sthis multi-shot system as 10x Quick-Shot Technology. The SAT2 2-stage, adjustable trigger unit has been upgraded and now also carries the term ‘CAT’, standing for Custom Action Trigger.

The modification allows you to independently adjust the 1st and 2nd stages of the unit’s operation. This means that you can adjust the length of travel for the 1st stage and length of travel plus pull weight of the 2nd stage independently. The main alloy trigger blade is broad and nicely curved, while the manual safety lever is much smaller and sits in-front of the main blade inside the trigger guard.

So, with everything sorted, it’s time to begin shooting. You notice the barrel shroud is quite long (as is the rifle) so this offers a good amount of leverage for cocking the gun and the operation isn’t a strenuous one. Returning the barrel without thumbing in a pellet at first seemed a bit strange; but, sure enough, a pellet was in the breech and on firing the rifle nudges back in the shoulder, a familiar trait to the gas-ram power source and report is tamed to a very low ‘thud’, due to the company’s Whisper Maxxim Integral Sound Moderator. The barrel is fully encased in an over-moulded synthetic sleeve. Internally, there are ‘secret’ silencing systems, which ‘could’ entail a baffling unit of some type, but that’s conjecture on my part, as allknow for certain is this it’s very effective and efficient unit. Externally, it has a set of stylish lateral flutes running its entire length to meet the very ‘largecalibre’ looking vented muzzle break. There’s no denying that the integral silencer is a superb unit; however, I question the reasoning to put a vented muzzle break up-front, as though cosmetically it complements the design, it does however add another 2-inches to the rifle’s overall length! As for accuracy, with a 25-yard zero, this is a rifle capable of killzone accuracy with groups on paper soon showing as ¾-inch ragged puncture marks.

Now the big question; have Gamo come up with a fully functioning, field-ready, mechanical action air rifle with a multi-shot facility. The answer- yes! However, although I’m sure the autoload mechanism has been tested to breaking point, I can foresee that this external and large unit could so easily be at risk of a good few knocks while doing its duty. In operation, I can’t fault it, plus I haven’t heard many complain of a problemwho have the original models of this rifle. So, I’d say there’s been enough time for it to have proved itself. Talking of the original, if I had to choose, I’d opt for the wood version, although when shooting the tactical you don’t miss what isn’t there; however, from my experience of using height adjustable cheekpieces, I’d like the option to have one.

That’s personal choice though, as quite frankly, Gamo should be applauded for taking on a task that many in this day and age of technological advancement haven’t even attempted, that being to create a multi-shot mechanical action air rifle. Sure, we had classics in the past, but they’ve long been discontinued. If a multishot that ‘won’t run out of air’ appeals to you, I strongly advise you have a look at the Maxxim Elite in both stock options, as it’s a unique and niche filling air rifle that’s accurate, lightweight and makes for a more than capable general-purpose hunter.