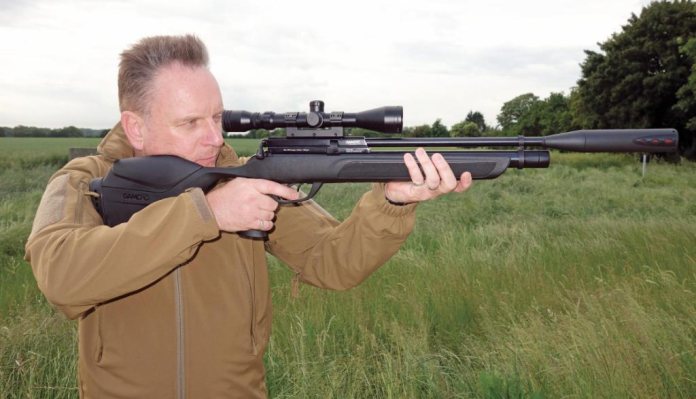 To make it easy for people to get into shooting, there are quite a few spring guns that are sold complete with a scope, mounts etc. but you don’t often see the same sort of ‘package deal’ with pre-charged pneumatic (PCP) air rifles. Also, anyone buying a PCP will obviously need some way of charging it, as even though some gunshops offer a ‘top up’ service for PCP owners, it’s not exactly the most convenient way to charge your rifle. A dive cylinder is the easiest way to ‘feed’ the gun but they are around £160 for a small bottle and a modern, highpressure pump a similar price.

Gamo have seen a gap in the market however and have launched a new rifle, complete with scope, mounts and gunbag; that’s not all though, as a highpressure pump has been thrown in too! When you find out that all of this will be available for only £499, now that’s a real bargain!

The major component of the Gamo ‘Phox Pack’ is obviously the rifle itself and it has the usual barrel over air reservoir layout used by the majority of PCP companies. The action is a carbine version of the Gamo Coyote and uses a reliable 10- shot rotary magazine system and a rear-mounted bolt.

The barrel is supported in a ‘belt and braces’ manner by a figure of 8-shaped collar at the front of the air reservoir. It probably doesn’t actually need the extra support but it’s a reassuring addition, especially for an air rifle that may well be used out in the field after vermin. Even an accidental hefty wallop shouldn’t cause loss of zero but it’s far better not to knock your air rifle about in the first place! Mounted to the front of the barrel is a synthetic ‘Whisper’ silence, often found on Gamo spring guns – more of that later.

The nicely polished air reservoir and barrel are fitted to a gloss black anodised breechblock and the whole action looks well put together. There’s an air pressure gauge on the front of the air cylinder, mounted on the end of the quick fill inlet port. An O-ring sealed probe is inserted to charge the gun and a sliding cover prevents anything nasty entering the internals; even the smallest piece of grit can play havoc with a PCP’s internal components, so a cover such as this is worth its weight in gold. I’m still amazed that some other companies, that use similar probe/port charging systems, fail to supply a cover of some sort!

The magazine is like the ones used in BSA PCPs and is simple to fill; the internal pellet rotor is revolved against spring pressure and pellets dropped into the holes as they appear, until the magazine has 10 rounds on board. The bolt is withdrawn and the mag slipped into the housing from the left, where a hidden magnet retains it, no extra retaining catches are required.

The inner wheel, red for the .22 calibre test rifle, is numbered around its circumference but the best way to know when you’re about to fire your last shot, is to watch for the white dot that appears in a hole in the rear face of the mag.

The Phox’s black, ambidextrous stock is a onepiece, synthetic affair and it’s a very stylish design; we really are quite spoilt these days when it comes to the stocks fitted to modern air rifles, even ones that don’t cost an arm and a leg. Starting at the front, the forend has a rounded profile with two gripping panels on either side. The panels look as though they are the type of ‘grip tape’ used by skateboarders to add extra texture to the their ‘decks but it’s actually moulded in during production. Moving back, there’s a nice upright pistol grip and moulded in trigger guard. The cut out behind the grip is large enough for even the largest of hands and there are gripping panels, like those on the forend, either side of the grip. The cheekpiece is quite high, for providing perfect alignment with the supplied scope. A ventilated, rubber recoil pad finishes things nicely, as does the curved section behind the rear of the action. The stock is obviously hollow, as it’s very light but it is in no way flimsy and is very rigid; top marks to Gamo!

The Phox came for the review with a Gamo branded 3-9x40 scope and a onepiece mount already fitted and it was already pretty much zeroed, which was nice!

Before I started shooting, it was obviously time to get the pump out! The T-shaped pump has rubber grips on the handle and the tube it is connected to is actually the ‘outside’ portion of the pump that travels up and down the ‘inner’ shaft. An outlet is at the bottom of the unit with the hose attached and an oil-filled pressure gauge is situated above it. The baseplate is actually formed from a central plate and two hinged footplates either side that are connected by a spring; this spring ensures that the footplates stay out or folded, depending on whether the pump is being used or stored away. The pump comes with a quick fill plug that is used to ensure the unit is airtight when it is initially set-up but in normal use the rifle’s brass filler probe is screwed on in its place. The filler hose is 20-inches long, which is more than ample.

The hose has a spring around it to stop it kinking, a handy loop of cord is attached to the end, so that the hose can be clipped up out of the way when not in use – the last thing you want is the charging probe laying on the ground!

The pump proved to be easy to use (Okay, not as easy as using a dive cylinder!) but it wasn’t too tiring to get the Phox’s reservoir pressure back up to 232-bar after firing 90 shots. When the required pressure was reached, all I had to do was bleed the air from the hose by undoing the bleed screw at the base of the unit and pull out the quick fill probe from the rifle – not forgetting to slide the dust cover back over the filling port. I say it’s not too tiring, but it’s a good idea to let your heart rate get back to normal before you stat shooting again.

A couple of range sessions proved to be very enjoyable, and using H&N Field Target Trophy pellets, I achieved very good accuracy out to 50-yards. Consistency was good and the Whisper silencer really did its job well. The Phox Rifle Pack is a well-priced package and I think there will be plenty of people introduced to the joys of shooting a PCP by it.