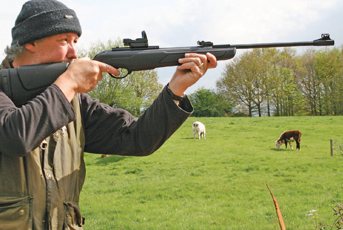 With BSA marketing both the BSA range and the Gamo range of air rifles you certainly have a good diversity of hunting arms to choose from. If you are looking for a good value hunting air rifle that has spring propulsion then any one of the Spanish made Gamo range of air rifles will suffice. I had on test the Gamo Shadow DX which is a sporter type rifle with synthetic stock and enough power for normal hunting ranges. It differs from the previous Shadow model due to fibre optic open sights and insets to the synthetic stock.

It’s a good size rifle, not too long, not too heavy and very easy and smooth to cock, so actually doubles as a dual role plinker/hunting rifle.  With a price of £144 it is aimed at the first time buyer but is equally at home in the field for small vermin control.

I like the Shadow’s stock, it’s practical, nice looking and has features that make it a bit different from the norm and help out in the field when hunting.

The overall stock has a sporter style and is a two piece injection moulding of black/grey polymer that has a textured matt finish. It’s a bit hollow feeling and the forend is easily moved between the fore fingers but it feels good in the shoulder and the forend has twin inset panels of raised checkered rubber that are softer than the surrounding polymer thus giving a more tactile grip. The same is true for the pistol grip with the inset panels following the contours of the grip.

The cheek-piece is a little different too with a section of the same polymer that makes up the stock secured to the top of the butt section. This raises the comb and allows use for both left and right handed shooters as a cheekpiece is mirrored on both sides. A nice thick soft rubber recoil pad finishes off the stock and is ventilated but has the three vents plugged with rubber! They do come out though.

The barrel is 17.25 inches long and this model has no sound moderator fitted, which is a shame as the report on firing is quite loud. The overall finish is a matt blue as with the receiver and the internal rifling is free from imperfections.

The open sights fitted are rather good too and offer themselves for use for plinking. The fore sight is attached to the barrel with a moulding that holds the red day glo dot element with a triple vented hood cover.

The rear sight also has a Tru-Glo day glow element, this time green in colour with twin dots to centre the red dot from the fore sight and has simple yet effective windage and elevation adjustment wheels.

The action is slender and has a typical BSA/Gamo scope rail attachment that has a 11mm raised rail and recoil stop to keep your scope from creeping. The cocking action is very smooth, helped by the leverage from the longer barrel and the trigger is solidly engaged with just a hint of spring noise compression that soon goes after a bit of use.

The trigger guard is actually part of the stock moulding. The trigger blade is nicely curved but quite slim and smooth surfaced; it looks plastic to me, a bit of ribbing would be nice. It works OK and trigger pull was tested at 4.75 lbs on this rifle.

The manual safety too is a bit odd; a small blade projects down in front of the trigger blade and has to be pulled towards the trigger to make the rifle safe. I prefer a side mounted safety myself.

As I said before, the cocking is nice and smooth and only a small effort is needed to break the detente release yet when locked up again it feels solid and so contributes to a good barrel alignment.

The trigger takes a bit of getting use to but really is fine and let off is precise and predictable. I liked the open sights and shot a few targets and tin cans with them and really enjoyed myself, just proving sometimes old is good. I also had great fun shooting with a red dot sight, nevertheless, for testing I fitted a regular scope and headed down to the range.

Power-wise the .22 cal Shadow was fine. A little light on overall performance but this made it very smooth shooting and very consistent. Some pellets like the FFT and AA Fields were shooting just 10 fps variation.

Accuracy wise the Shadow is much as one would expect from a value for money spring gun. Most pellets shot around the 1.0 inch mark at 25 yards but several shot less, which I think is impressive.

Most accurate were the FFT’s at 0.75 inch five shot groups at 25 yards with the AA Fields, Logun Penetrators and Premiers close behind at 0.85, 0.95 and 0.95 respectively.

Velocity and energy wise most powerful were the Logun Penetrators at 546.9 fps producing 10.8 ft/lbs energy and coupled to that 0.95 inch groupings they were the best pellet tested.

The FFT’s were the most accurate and only 0.5 ft/lbs behind the Loguns, so it may depend on availability of pellets at your local gunshop as to which you choose.

When I picked up the Gamo Shadow for testing I just thought it was another cheap springer, but upon shooting it with a variety of pellets, scoped and with open sights, I warmed to it. In fact other than the flimsy forend and slightly lower power output than I expected the Shadow would make a good first time or low budget hunting tool. My only reservation would be the muzzle report, it was loud and perhaps the Gamo Whisper might be a better bet if this troubles you.

Other than that the Shadow is a very consistent and accurate air rifle that you could shoot all day long, and have some great fun all just plinking away at targets in the afternoon and then take it out in the evening for a spot of rabbiting. GM