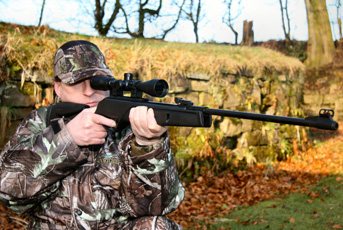 On first handling the 6.6lb un-scoped Gamo SOCOM 1000 it’s obviously a well built and nicely balanced springer. Apart from the Jon Sykes designed Tactical XL stock, this is certainly up there in the synthetic stakes.

The matte black synthetic stock is classed by Gamo as ‘Anti-Shock’ and has a very useful fully ambidextrous height adjustable cheekpiece, slim neck and a superbly designed pistol grip that not only drops down steeply but continuously swells out as it does until it ends in a unique looking grip configuration. The thick black rubber butt pad has those 7-oval holes we’ve seen on other Gamo’s and has a nice inward curve to sit in the shoulder.

If you want hand filling dimensions then this is the springer for you as I’ve never experienced a stock grip of such a design. It offers a superb hold and manages to allow your trigger finger to sit exactly as it should on the trigger blade. The integral trigger guard is also very generous so you won’t feel cramped as you operate the forward position manual safety blade. The flat bottomed forend is quite slim and gets slimmer as it tapers towards the slightly rounded angular tip. A very generous amount of stippling wraps all the way around the grip and the slightly raised side profile of the forend is completely covered. As the synthetic used in manufacture is inherently non-slip - you’ve got one very ‘grippy’ air rifle in your hands. In my opinion the synthetic stock is one if not the best Gamo have ever produced.

Thanks to the ‘Tru-Glo’ open sights this is a shooter straight from the box. These sights consist of a raised red fibre optic foresight sensibly protected by a stylish metal hood while the rearsights square section notch is flanked by green fibre optic bars. It’s fully adjustable for windage and elevation thanks to a large serrated edge wheel for the latter and a smaller dial with a very fine outer ridging to aid grip takes care of adjusting the windage. They operate very positively as they click around and dropping the adjustable cheekpiece to suit the ‘Tru-Glos’ sight line, sub 1” groups were easily achieved at 12 to 15-yds. This served to get me itching to set the BSA 3 – 9 X 40 Essencial onto the raised black anodised aluminium scope rail, itself bolted to larger lower dovetails on the rifle cylinder below.

Napier has the Edge

Cocking was smooth and easy due to the lengthy 17 ¾” tube, but a tad of internal ‘graunch’ was heard at the end of the cocking stroke. This soon eased off to become hardly noticeable and a thin smear of grease on the spring coils should dampen that down further.

The barrel locked back solidly for direct pellet loading and good to see an anti-beartrap incorporated but, as always, keep hold of the barrel when loading. Due to the large wedge shape detente catch I’m pleased to report it locked just as solidly in the closed position. Currently only available in .22 calibre I zeroed for 25-yards, taking rested shots and the SOCOM proved to be hunter accurate, creating ragged c-c groups of no more than ¾” at my set zero using most quality ammo. I had some Napier UPH Pellets left over in my range bag and surprisingly they did seem to have an edge on some of the other quality brands I used. I’m thinking I’ll give Napier lead a bit more use in the future for gun tests and possibly in the field in my own rifles.

Muzzle report wasn’t alarming possibly due to the relatively lengthy tube and recoil was surprisingly very low for a full power legal limit springer. That big chunky butt pad won’t have much to contend with and certainly looks the part but more importantly from a shooting perspective it feels good in the shoulder.

The only gripe I had with the SOCOM was the trigger blade and manual safety blade were plastic and looked quite cheap compared to the rest of the rifle. Now for a rifle to boast it has ATS (Advanced Trigger System) you’d think cosmetics as well as performance would be enhanced. I was given little information on this rifle but it does have a 2-stage trigger. I couldn’t see any adjustment, but that doesn’t mean it hasn’t. I hope BSA (Gamo Importers) clears that up for us soon. Gamo have come a long way in terms of trigger units but this in some ways felt like a slight step back. Maybe it was the ‘plastic’ blades that surprised me as it released shots very predictably and quite crisply.

For a starter rifle I feel it’s got a lot going for it. The main aspect being it’s a hunter and the accuracy certainly proved it’s up to taking vermin at sensible ranges. Frankly, I think the SOCOM 1000 will do well in the Gamo stable of air rifles that do seem to be growing larger in the UK by the year.

It’s accurate, light, handles very nicely scoped or unscoped and that adjustable height cheekpiece is a great idea and not just there for eye candy. It’s ‘double pillar’ and is held in position by two largish disc inserts on the right hand side of the stock that are styled in this manner so the smaller hex head recesses in the centre (Allen key supplied) don’t look glaringly obvious or out of place.