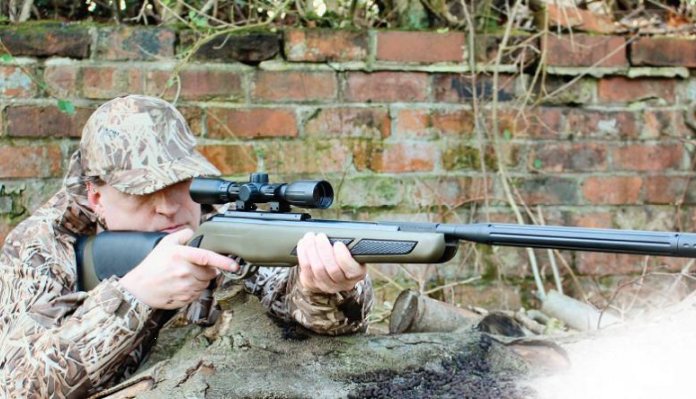 When it comes to spring or gas-ram rifles, there’s no disputing the fact that Spanish gun manufacturing giants Gamo are now amongst the leading players; it’s hardly surprising, as they offer a comprehensive range of stylish and practical sporters. The new Barricade however, breaks slightly from this template, as it’s one of three models in their designated ‘Varmint’ range that come bundled with in-house optics and mounts, as a ready to go combo.

This consists of the Stalker DX, Hunter Classic and the Barricade. While all have identical actions, the feature that individualises each model is the stock. The former is an all-black synthetic, the ‘Classic’ traditional beech furniture and the Barricade has olive green synthetic furniture, with generously sized black rubber inserts to aid grip. The other commanding feature that they all share, is that the barrel is shrouded in a ‘Bull Whisper Silencer’; visually it’s a semi-fluted, synthetic bull barrel outer with an ‘air dispersion’ end tip. Coupled with the stock designs, these tend to give the Varmint series the look of a fullbore centrefire.

The Barricade stands out with its stylish looks, but it just screams ‘solid hold’ too. The colour contrast begins at the butt, where the base olive green colour is dominated by a substantial medium height ambidextrous ‘black section’ cheekpiece and cushioned ‘Shock Wave Absorbing’ thick rubber butt pad. This refers to the familiar insert blocks installed through the pad, so it can be tailored to suit your requirements. ‘Inserts’ left in place for a full pad or ‘inserts’ slid out to offer a ventilated design – the latter of course being more forgiving to help quell recoil at the shoulder.

The slim neck and shallow rake allows for a comfortable hold on the pistol grip. The forend is slim and lengthy, tapering slowly upwards, to end in a neat rounded tip, just short of where the barrel shroud begins. The rubber ‘grip’ inserts are seen as two-panels set either side of the pistol grip and along the forend and formed so they stand slightly proud of the stock and are configured with a multitude of raised oval shaped dots. There’s also a lengthy run of fluting that comes from the top leading edge back to approximately midway along the forend. The rifle is surprisingly light and even measuring 44.75” from butt to muzzle handles far better than you’d first expect.

Due to the length of the bull barrel shroud it acts as a useful lever, helping to reduce the effort needed to cock this break-barrel action springer. Taking into account the rifle also has a lengthy articulated cocking linkage, accommodated for by a long slot in the underside of the forend. The cocking movement hinges easily but does require a ‘bit’ of heft towards the end of travel before the sears engage. Once in the fully open position, the mechanism locks back with an assured click and a solid feel. With a pellet in and the barrel closed, a large, wedge-shaped detent keeps the rifle solidly shut and the O-ring breech seal ensures all is airtight.

The top of the air cylinder is grooved for mounts but also comes ready fitted with a 6” long raised scope rail adaptor. This solid platform has a mount arrestor stop at the rear and helps raise smaller objective lens optics, so that you can attain a comfortable head position on the cheekpiece for correct scope/eye alignment. A nice feature and useful on this option, as the Barricade comes bundled with a Gamo 4 x 32 fixed magnification scope. It’s quite basic but is usable for general airgun hunting ranges, though personally I’d have preferred it to have been paired up with a 3 – 9 x 40, like the other two in the range. I’m sure many will feel it’s a decent enough optic and it does enable you to, as we say, ‘shoot straight from the box’, once zeroed of course!

All Varmint models, like many other Gamo rifles, use that now familiar 2-stage trigger layout, which includes an in-guard safety lever set just forward of the main blade. A word of caution here; it’s a manually operated safety, as the cocking stroke doesn’t engage it on lock back as is the case on some similar designs. However, trigger safeties shouldn’t be used as ON/OFF switches, so it’s good practice upon cocking to get into the habit of immediately setting to SAFE if a shot isn’t instantly going to be taken. In use, the trigger operates precisely and with no undue creep as it trips the sears reasonably crisply.

Recoil is low and the integral Whisper system silencer in the barrel shroud and tip reduces muzzle report to an acceptable level. Some might prefer to remove one or all butt pad inserts but I was surprised at how well this lightweight, though quite lengthy, rifle-quelled recoil upon firing. As for accuracy, after setting a 25yd zero for the .177 calibre test rifle and after a short period of initial dieseling, I was able to produce 1” groups shooting both freehand and rested.

The Varmint Barricade Combo is a nice package deal – based on a solid action design, it has a stylish and practically featured stock - of the three ‘Varmint’ options, I’d certainly choose this one! A minor gripe is I’d prefer a higher spec’ scope to be included, also overall this capable sporter is a bit lengthy for my taste.

Having said that, upon handling and firing, the lightness of the overall set-up helps dispel any misgivings you might have that it’s cumbersome. As an all-weather option it comes out of this test with flying colours, as there’s no way you’ll have any problems holding onto that grippy and tactile stock, no matter what the weather throws at you.