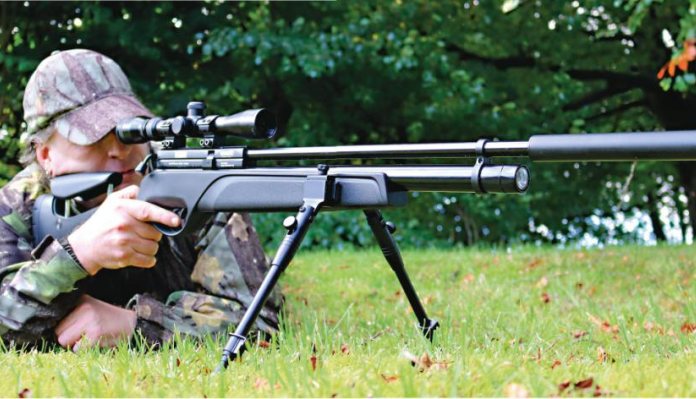 Depending on which reference you look at, the name Venari is of Latin origin and means ‘hunt’, ‘pursue’ or my particular favourite ‘huntress’. A fitting name for a hunter-oriented air rifle. The Venari comes bundled with a Gamo 3-9x32 scope, two-piece mounts, sound moderator and what is termed a dual-mount bipod.

Over recent years, Gamo has concentrated on manufacturing air rifles equipped with innovative, ergonomic, high-quality synthetic/ polymer stocks. The designs being equally as practical as they are cosmetically appealing but bottom line is, they can easily withstand the rigours of field use. With that said, the ambidextrous stock of the Venari is an interesting design as it’s unashamedly tactical in both style and intended usage.

The butt section features a height-adjustable cheekpiece and is fitted with Gamo’s SWA (Shock Wave Absorbing) black rubber butt pad. A title earned due to its ability to have one or all of its three oblong shaped inserts removed, allowing you to alter its shock-absorbing properties. However, in this instance, the pad is installed for shoulder comfort only, as a PCP doesn’t produce any recoil. In comparison, the neck is very slim and gives way to a steep drop-down pistol grip with a generous palm swell where large panels of very fine stippling are found on either side.

The slim and lengthy forend has a flat underside plus it is almost covered on both sides with the same style of stippling used on the grip. It’s also contoured to allow for a sure leading handhold anywhere along its length. In fact, the entire stock has been moulded with a slightly rough texture, resulting in the Venari being a very easy rifle to hold no matter what the conditions. At the very front of the forend are two short runs of Picatinny rail that are attached to either side, these are for fitting the dual bipod that comes in the package.

Incidentally, I’m sure that Gamo followers will be familiar with the stock as it’s a modified version of the handle used for their HPA IGT gas-ram powered air rifle. As stock’s go, this is a truly tactical and tactile one that’s certainly fit for purpose. Incidentally, where the cocking slot used to be, the company has now cleverly and very precisely integrated a solid stippled section of polymer to plug/conceal its original form.

A neat stainless steel collared air gauge or ‘manometer’ sits at the tip of the strengthened steel air reservoir and is deeply recessed to avoid damage. The fill point is hidden and protected underneath a black coloured plastic friction fit collar/sleeve that prevents the ingress of dirt and grime. This needs to be fully removed (pulled forward and off) from the reservoir before you can use the QF probe, which of course is supplied. Then it’s a simple case of inserting this into the front side fill port and injecting the rifle with a 232 bar fill of compressed air, as recommended by the manufacturers. This returns approximately 100 shots in .177 and 120 in .22 (on test). In use, the test rifle produced around 100 or so full power shots but they did show a high level of consistency – so there is enough juice for even the longest hunting foray.

To the rear of the air gauge and inlet cover is a well-sized and strong looking ABS band to help prevent the barrel from being knocked off-line. Incidentally, as I’ve mentioned before, on Gamo rifles of this design, though the trimmed down stock and slim air reservoir may appear to be a tad flimsy – they’re not! In this case, looks are certainly deceptive and are not an indication that strength and integrity in any area have been compromised or sacrificed for the achievement of manufacturing a very light and slim rifle.

The cocking bolt has a finger-friendly, flatended teardrop handle which feels good in the hold and operates positively and smoothly. Also, the more you use the rifle you appreciate that its shape makes the handle easy to ‘pick up’ during operation.

As you’d expect, the Venari uses the same tried and tested 10-shot removable self-actuating magazine as BSA. To recap: the mags have a colour coded high impact polymer inner rotor (BLUE .177/RED .22). Also, at the top on the exposed area of the ridged outer edge of the rotor, the chambers are numbered so you can visually keep track of your ammo supplies. There’s also a small circular aperture towards the bottom left of the magazine faceplate that shows a white dot when you’ve come to your last shot. However, unlike the BSA unit, the Gamo mag doesn’t have a manual retaining catch on the action to hold it in the housing. Instead, it is held in situ by a strong magnet which is positioned at the side of the loading well, as are two slightly protruding metal side plates that help guide and hold the magazine securely in the left of the action.

The 2-stage adjustable trigger unit features an in-guard manual safety blade set forward of the nicely curved and broadfaced main polymer blade. Thankfully, the unit cleanly releases shots and while the well-styled trigger blade offers a comfortable finger feel the safety blade is of such a size and so positioned that it’s also easily operated by the trigger finger.

The trigger unit has been upgraded due to it having the CAT denotation which stands for Custom Action Trigger. In usage, its first and second stage of operation can be independently adjusted for length of travel plus second stage pull weight. I’m reliably informed the first stage uses a spring that can be adjusted for tension, so it does give you a reasonable amount of input to set the trigger to your requirements. As the rifle comes set from the factory it gives a predictable shot release, so I found no reason to alter it.

The airgun bears the words ‘Made in the UK’ on the receiver, a clear indication of their commitment to sister company BSA. Indeed, the 18.5”, high quality, cold hammer forged barrel is the same tube fitted to many a BSA air rifle. It is threaded ½” UNF to accept the supplied moderator, which is slim yet lengthy at 7 5/8”. It has a slight crackle-effect finish, looks the part and credit where credit’s due it really does work well at reducing muzzle report. Once scoped up, I set zero for 25 yards and began the test process shooting freehand. The Venari felt nice in the hold and showed itself capable of ragged ½” holes at ranges out to 30 yards.

Next, I fitted the unconventional bipod which comes as two separate detachable legs. Like a conventional ‘pod’, they can be folded up out of the way when not in use. Fitting the legs is a simple procedure because at the top of each leg is a Picatinny rail mount unit that mates up with the rail on the forend and secures in place using a bolt head locking clamp and locating bar. A nice feature is that the bolts can be tightened up using your fingers so no need to take a spanner into the field.

The legs are height adjustable, effectively elevating the underside of the rifle from 8–10” off the ground. Granted not that much in variation, but in use, they proved well suited to shooting from the prone position. Shooting rested tightened up the groups and certainly gave me the confidence to take longer range shots. The Venari is surprisingly accurate but for low light hunting, it would benefit from a higher quality optic, which I reckon some will decide to fit.

The Gamo Venari is a lightweight, accurate, well balanced and user-friendly multi-shot PCP. It comes bundled with a good selection of useful accessories and though the optic is basic, it’s still capable enough to be used for general-purpose medium range hunting. The action operates very smoothly and positively, the magazine works faultlessly and full marks to Gamo for the excellent sound moderator that’s included in the package.