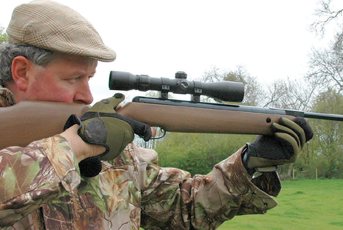 Conventional break-barrel airguns are as popular as ever, which is no surprise when you think about it. This time honoured design can be manufactured relatively cheaply, but the appeal goes much deeper. At the heart of the system lies a super practical configuration that lends itself to fast fire shooting and simple uncomplicated pleasure and for that reason, the good old break-barrel should be with us for quite some time yet.

On test here is the Seeker 550 model from Hammerli, which has just recently hit the market place. It’s available in .22 calibre only, and is primarily designed as a no frills, general purpose model - packed with plenty of power for hunting, yet simple in design, which should appeal to a wide audience.

These days the classic brand name of Hammerli forms part of the Walther portfolio, so the Seeker comes very well connected. An all–in asking price of sub £200 for the package as seen, represents good value on the face of it too, so let’s see how this newcomer shapes up, and what you can expect for the money.

At the time of writing, for the list price of £199.99, you get the beech-stocked Seeker, the rather impressive looking Backdraft silencer, and even a Walther 3-9x40 telescopic sight complete with mounts.

Admittedly, the rifie is visually rather bland, yet that mega silencer dominates the profile, with the result that both looks and balance are transformed. The sleek and pleasantly stained beech stock sports an extended forend so the breech block is concealed in the wood, which always looks better. Whilst the stock is technically for a right hander, given the subtly defined cheek piece, and the fact that the grip is fully ambidextrous, means that the Seeker can be shot by south paws with near equal efficiency. That grip is nicely thinned out too, which helps aid control, and if I had to criticise the design, the unnecessarily hard rubber butt pad is worth a nit pick.

Finish-wise, all the metalwork (barrel, breech block and cylinder) are equally impressive, being treated to a high standard of pre-polish and chemical blueing, with the result that the Seeker feels satisfyingly well built. Indeed, given that asking price, this level of finish really is quite surprising and way above many guns in this price sector.

Bearing in mind that the scope featured here is included in the price, I suppose we can’t expect too much, but the Walther branded 30mm 3-9x40 model, failed to impress. Despite having ultra positive turret clicks, the image proved just a little milky at maximum magnification. Dialled down to x7 however, clarity was reasonable, and it’s only fair to stress at this stage that this was my experience with the model on test. Other examples of the same scope may well perform differently, and in this price bracket, I suspect they’ll do just that.

Moving to that mega silencer and the first thing to note is the wholly practical matt black finish, contrasting nicely with the blued barrel. These monster 9.5inch cans are marketed by Armex as the ‘Backdraft’ and the ingenious fire ex’design actually sits some six inches down the barrel, so some spent air is vented backwards before exiting via the baffle into the front chamber.

In addition, the design also allows for the whole unit to be dismantled and re-positioned back to front if desired. A threaded adapter is permanently fixed to the barrel and by unscrewing each end of the silencer turning round the tube and re-screwing it into place (replacing each end cap), the expansion tube forward of the muzzle can be increased or decreased in size. This of course can increase or decrease the overall length of the rifle to suit, thus the shooter is afforded some versatility in the set-up.

Silencers on spring rifles rarely have such a dramatic effect on taming muzzle crack as when fitted to PCP’s, due to the nature of the system and the way the air is compressed and ultimately allowed to expand. Yet the report on the Seeker seemed nicely muted nonetheless. For me, the rugged looks and additional front weight are bonuses in themselves and reason enough to appreciate this all inclusive add-on.

In use, the Seeker’s breech will break open with minimal effort, being perfectly weighted and assisted in part, by the bulk of that massive Backdraft silencer. Overall cocking effort is about par for the course, especially given the full power on offer, but the slickness of that breech opening gives the whole operation ahead start.

Triggers are an area where economies can be made and the unit fitted to this Hammerli is very basic. A pseudo 2-stage design sees plenty of creep before the mechanism gives in, yet with a manual safety catch incorporated, everything is in place for novice shots or shooters on a budget.Performance on the range was fairly good and with the Seeker posting near text book readings on the chronograph, 11.4ftlbs and a spread of 10fps using Daystate FT pellets, I was keen to gauge down range groupings. Over 30yds, ¾” clusters soon proved the norm, and I was left in no doubt that this rifle can give a good account of itself if fed the correct diet of ammo. Although several cheaper brands were tried, even the best pellets available (i.e. Daystate FT’s and the like) still representing good value for money when compared to the price of ammunition for other shooting sports.

All things considered then, the Seeker is a worthy addition to the famous Hammerli brand name, especially bearing in mind that all inclusive asking price. Yes it hardly breaks the mould, being traditionally styled - even a little bland in appearance; yet it’s a welcome newcomer for sure. An ideal choice in fact, as a starter pack for any beginner, or a budget, short to medium range hunting combo, and for that reason this well thought out package deal comes highly recommended.