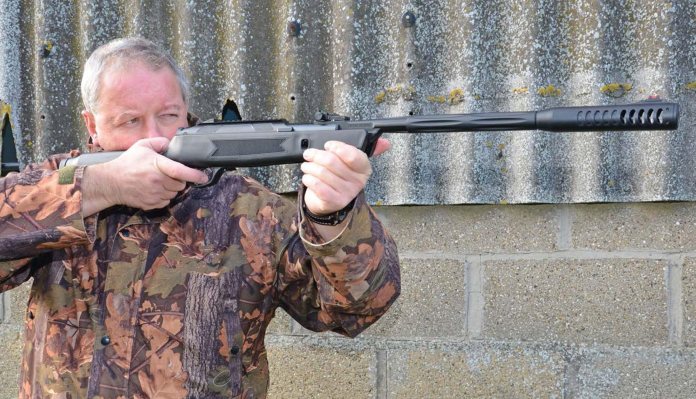 I think we can all agree that it’s fairly vital that we encourage new blood into our sport, but in today’s technology-obsessed age, prising the little people away from the X-BOX or the dreaded mobile is no easy task. Just assuming that you do manage to thwart little Johny’s or Jemima’s efforts to download inappropriate material from the internet for 10 minutes, and steer them towards actual fresh air and the prospect of some exciting target sports, then having suitable equipment to hand is a prerequisite.

That’s where the industry’s approach becomes so important, as for youngsters to really want to get involved, manufacturers need to produce dedicated junior models, that can be easily handled and controlled. To emphasize the point, imagine placing an Air Arms TX200 into the hands of a little 10-year-old, and expecting them to feel comfortable. Whilst the TX is undeniably one of the very best springers available, the combination of over 9 lbs weight, and the effort to work the full power adult action, is simply a non-starter, for a slightly built child, still developing muscles.

A ridiculous concept? Well, I’ve seen plenty of similar scenarios on club ranges and ‘have-ago’stands at country shows. Youngsters that can barely even pick the gun up are unlikely to warm to the prospect of shooting after such an experience. Yet with a little thought, it doesn’t have to be like this.

A question of scale

On test here is a perfect example of what we need, ideally from every manufacturer. It’s a dedicated junior rifle, deliberately designed to make the whole process of shooting easy for youngsters. The Hatsan Alpha is the model name, and everything about it is scaled down for the job in hand. Let’s face it, juniors starting out simply don’t need maximum power, and once that statement is digested and acknowledged, then designers have more of a free rein to achieve the desired end goal.

The Alpha is a traditional spring piston powered airgun, and the break barrel configuration is ideal for stress-free shooting sessions. The barrel is a steel liner within a rather trendy full-length moulding, which includes a synthetic shroud, cocking aid/foresight assembly, and even a synthetic breech block. The adjustable rear sight is synthetic, as is the stock, trigger and guard. The trigger is two-stage, there’s an automatic safety catch, and synthetic scope rail which includes an arrestor.

Plenty of features then, and as you can imagine, with all that plastic/synthetic going on, weight is encouragingly pinned to 5.1 lbs - perfect for a pint-sized tool that won’t easily tire anyone out. Look to that moulded scope rail and Hatsan’s dual rail system is utilized. Conventional 9-11mm mounts can be used on the inner raised sections whilst Picatinny/ Weaver mounts will clamp around the outer rim, locking into the slots. All rather neat and with that integral arrestor backstop also on offer- highly effective.

With novice junior shooters the target market here, I would firmly recommend bearing with the open sights and properly learning the ropes, before jumping to fit any glassware. Since they are TruGlo fibre optic open sights, there’s a good clear sight picture afforded, even in fading light. Just line up the red element of the foresight within the back notch (formed with two green dots), get everything even and consistent, and you’ll be surprised just how capable the little Alpha can be. Clearly marked finger wheels make adjusting the rear-sight a simple affair too.

As mentioned, this model is designed to be low powered, to keep effort to a minimum, and you can tell a lot by the angle of the stroke. On the Alpha, the barrel only moves through an arc of around 90°, instead of coming right back. It’s a short-stroke in other words, incredibly easy to cock, and deliberately so, to encourage slightly built juniors. Push home a pellet flush with the breech, close up the barrel, and you’re away. It should be noted that at this stage, an automatic safety catch sets and the antibeartrap system comes into play. Thereafter, the action has to be fired rather than de-cocked.

Low power on a springer means that there’s far less spring poundage hanging off the trigger mechanism, so the effort is reduced here too. In this price bracket, the trigger is obviously a simple affair, yet the inclusion of a nicely shaped wide blade with a flat surface makes a huge difference. Trigger pull is very acceptable, having unsurprisingly a small amount of creep in use.

As for firing the Alpha, the action is more of a snap on discharge, and whilst my test rifle had no spring resonance to speak of, it was still quite noisy. Given the reduced power of around 4 ft/lbs, I shouldn’t have been surprised at the muted recoil, yet it was satisfying nonetheless. Consistency was very acceptable - once I switched to quality pellets - at 22 FPS over 10 shots. However, the acid test for this little gem is whether or not it can reward shooters when their technique improves. And on that score, the answer is a resounding thumbs up. A single ragged cluster of pellets shot at 10 yards, using open sights and rested, was a great start. I moved back to 20 yards, where 5/8” groups were regularly achieved while still using the open sights. It’s impressively accurate then, and everything a youngster needs to enjoy their shooting and progress.

Simple but very effective, perfectly sums up this model. Airguns such as this are, as previously highlighted, so important to our industry if airgun shooting is to thrive. For we all have to start somewhere and user-friendly kit is what it’s all about if youngsters are to stay the course and swell the ranks of our great sport. Hatsan’s Alpha, as the name suggests, is indeed the perfect ‘first’ gun. With a current RRP of just £85, I’m sure it will set many on the road to a lifetime of satisfying shooting.