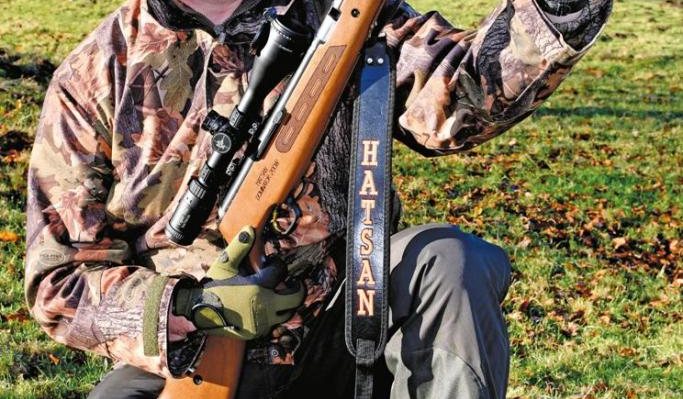 Turkish manufacturer, Hatsan, have become a real presence in the airgun marketplace over the last decade or so, and their range of guns has cleverly evolved and expanded, to meet global demand. Their PCPs are well known for the level of specification and features included in the asking price, yet take a closer look, and there are some intriguing spring-powered models in their line-up too. On test here is the Dominator 200W, and this model is best described as a beefy piece of machinery, aimed fairly and squarely at the adult shooter.

Going large on the deal

Whilst under-lever spring piston powered airguns are notoriously weighty, courtesy of all that necessary on-board metalwork, at just under 46” in length, and 9.9 lbs in weight, the Dominator 200W still takes you by surprise, as one of the heaviest guns in its class. The oversized compression cylinder accounts for some of that weight of course, and this allows Hatsan to offer FAC options to various markets, in much the same way as Weihrauch do with their large-framed HW80! We are talking big brash and bold here, but if you can handle the heft, then there’s an intriguing package on offer, plenty of character, and some half decent performance!

There’s a lot of features built in, and with sling swivels, branded sling, and even a bipod attachment all part of the deal, there’s plenty to mull over. An adjustable walnut stock, fibre optic open sights, adjustable 2-stage trigger, automatic safety catch, safety release bar for the breech, a Picatinnystyle scope rail, and Hatsan’s SAS system, are all here; so, it’s time for some serious evaluation!

The stylish Turkish walnut stock fitted as standard here, is very appealing, and with those sizeable areas of machine-cut chequering, there’s plenty of grip afforded where it matters. Matt lacquer is always preferable to gloss in my book, and there’s some nice grain pattern on show. The sling supplied is a bit crude to be fair, with the company name emblazoned in Hi-Viz orange! I did find that the simple attachment clips utilised, scratched the stock’s finish slightly around the swivels, just with moving the gun around, in and out of gun bags. That said, back in the real world, use this rifle as a tool, and does such minor detail really matter? The sling does its job at the end of the day, and all the hassle of fitting after-market swivels is avoided.

For the record, the finger wheel adjustable fibre optic open sights fitted as standard, are excellent; yet given this is no junior or beginners model, by virtue of the weight alone, sadly, I can’t see them getting much use. However, they do add a double dimension to a rifle like this, and as a discipline they are a good thing to practice with, as I feel they can make you a better shooter! The foresight element is all part of the under-lever catch muzzle assembly, which I should point out, has the barrel running to within ½” of the tip- so is not a silencer.

The cheek piece is adjustable via those large slotted bolts, and that means eye/ scope alignment can be perfectly tailored to the individual, which is a great advantage. Fitting a scope to this model is easy too, with a double dovetail rail. On top the standard 11mm airgun width and below it a 1” Weaver/Picatinny-type mount, so giving the shooter the option of whatever rings and bases they prefer. Plus, it has recoil slots, which is always a good thing on a springer, as it negates the dreaded ‘scope creep’, which is recoil-generated. Get the scope tightened up and in place, and then gently slacken the cheek piece bolts and raise or lower the cheek until the stock gently applies pressure to maintain that sight picture. Re-tighten the bolts, and your all ready to go.

Cocking is via the front-mounted, under-lever, which does admittedly feature a highly irritating catch arrangement, reminiscent of Weihrauch’s early attempts with the HW77. It is fiddly, and I found the best approach was to push those brass catches forwards and just let the lever drop, instead of trying to pull it down at the same time. In use, I found it best to pull it down in one positive sweep, until the trigger engages, and then all the safety features are set. However, good sense dictates to keep hold of the lever with the left hand (always safe policy with this style of action) and push home a pellet directly into the exposed lip of the barrel. Now, press the safety bar (anti bear trap device) on the right side of the breech and at the same time, close and snap shut the under-lever. Pull back the safety catch at the rear of the action, and the shot is now ready.

Fancy using the bipod that comes in the box? It’s a simple, scissors-type reminiscent of the original M16 design; spring-loaded, you squeeze the legs together to open the jaws and clip them around the cocking lever. A useful item, but, you’ve probably spotted the deliberate mistake, as you’ll need to remove it to cock the rifle. It works too, either for stable sniping from the prone position, or just as a temporary gun rest on the range and it all adds to the Dominator’s appeal.

Time to see how the big Hatsan shapes up where it matters. I’ve encountered the company’s Quattro trigger on a variety of their models, and I have to say, it’s surprisingly sophisticated. The pull weight, first and second stage, and main sear engagement, can all be adjusted; which puts this trigger way in front of a host of cheaper rivals. Spend some time on careful adjustment in conjunction with the instructions supplied, and the end result is a very competent unit indeed. The broad, set-back blade just feels spot on, and with a modest release weight, both consistent and predictable, good down-range performance gets off to a flying start.

Hatsan’s other internal feature, emblazoned on the cylinder, is their SAS (Shock Absorber System), sadly here I’m not convinced. The idea is that the stock mounts onto a metal leaf spring, which in theory, absorbs recoil, but on other lighter models tested, with SAS fitted, I’ve still found plenty of recoil. The sheer weight of the Dominator on its own is enough to minimise movement here in any case, but on the plus side, the firing cycle does feel super slick, with a fast lock time. The action goes off with a quick snap, devoid of spring twang, which shows plenty of thought at the production stage, to the internal set-up. Action noise however, is still rather loud and there seems no way of fitting a silencer, which in this day and age is a bit of a disadvantage! Over the chronograph, consistency, with FX pellets on test, was nothing short of superb, with 10 shot strings returning an average total velocity spread of just 6fpsjust about as good as it gets! Accuracy over 25yards, again using .22 FX pellets, returned ½” groups c-t-c, so again, well up to the mark, and very satisfying.

In this price bracket, Hatsan’s Dominator 200W has some serious competition to contend with, but it has so much character, that it may just hold its own, certainly with the growing army of brand-loyal enthusiasts. On-board features such as the butt’s, height-adjustable comb, and that highly attractive woodwork, all help the cause. Yes, it’s one beefy, bulky airgun, that’s strictly for adults only; but if the sheer heft doesn’t put you off, then this is a serious piece of machinery, capable of good performance.