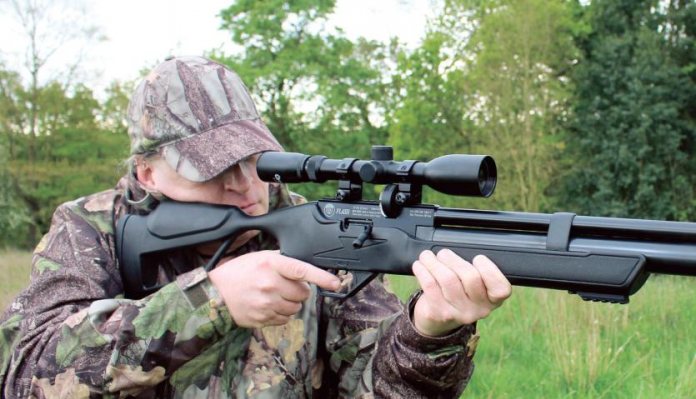 Either offered by the manufacturer or specific gunshop, combo deals are becoming increasingly popular. Usually they consist of a rifle and scope (obviously), mounts and occasionally a gun bag/slip is thrown in for good measure. However, in this instance, Turkish gun manufacturers Hatsan have really pushed the boat out because as well as a totally new model of lightweight MS PCP, the package includes, all previously mentioned plus their own and highly efficient hand ‘stirrup’ pump. The latter needs assembling but is an easy operation to undertake – it comes ‘broken down’ so all the accessories can be contained within one main parcel. Incidentally, the pump is one of the better models due to it featuring an extra wide footplate, ergonomic wide thick-set hand bars (with compartment for small accessories), integral particle filter and adjustable pumping angle.

But I digress, as quite frankly you’re getting a lot of kit considering the price and the package as detailed is only available from a few select retailers. Here I must thank T & JJ McAvoy for supplying it.

The Flash QE is a very lightweight and quite compact little number and interestingly, it’s from a series of 4-rifles that come under the Hatsan Flash moniker, all not currently available in the UK but they consist of the Flash Std (screwcut barrel, non-moderated), the QE as featured here and two models of bullpup – the latter of which I’m told has already arrived on these shores.

But back to the rifle here featured and noting the rifle has a full barrel shroud plus integral secondary moderator, it’s no surprise the ‘QE’ denotation stands for Quiet Energy. More on this later…

Hatsan are no strangers in the manufacture and design of polymer stocks as since the launch of their first ever PCP, the ATT44-10 they’ve used this material for most of their PCP launches. In this case the material used is termed ‘Advanced Polymer’, only the company know what this exactly means but what I know is these stocks are strong, weather resistant and reliable.

The stock is ambidextrous and what I and many others term ‘skelontised’, this is due to a large portion of the butt section being ‘omitted’ to lessen the overall weight. It has a medium height cheekpiece, very generous thumbhole, drop-down pistol grip plus full rubber buttpad.

From the butt to the slabsided mid-section the rifle is very slim. It’s after this point where the forend begins properly and fills out to afford a good grip, this is also aided by the well-rounded underside which sits very comfortably in the hand. A nice inclusion is that tust behind and below the stark angle back end tip is a short run of Weaver style accessory rail, for some this will also act as a natural hand stop.

Although the stock material has an inherent non-slip feel, generous panels of very fine stippling can be seen either side of the fore section and grip.

The rifle fill point(s) positioned at the front of the reservoir are protected by what at first looks to be a rotating collar. However, on closer inspection the fill point has an internal recessed plug that pushes out from one side or the other when you insert the fill probe. This is because there are two access points, seen as two holes at opposing sides of the dummy collar which in actuality is a strengthening protector for the end of the reservoir. It takes a 200-bar fill using the insert probe supplied and as I didn’t have access to the stated specs, I found shooting through a full charge returned approximately 70 - 80 full power shots in .22 calibre as per rifle on test.

As we’ve come to expect, there’s a useful air gauge deeply recessed (for protection) into the underside of the stock – always handy for keeping a check on your air status.

The Flash QE has a run of Picatinny style and 11mm dovetail rail for holding an optic. And the 3 - 9 x 40 scope supplied comes with a pair of dovetail style single screw mounts. These may look like Weaver base mounts but in the underside, they don’t have the usual securing bars familiar to this type of mount. However, they fit neatly across both edges of the rifle’s std rail and as they should secure the optic firmly in place.

The Optima branded scope features a mil-dot style reticle with finger adjust cover capped turrets. Initially I didn’t think the scope would be worthy of great detail but in use I’m pleased to report it gave a very clear, bright sight picture and felt solid and sure in operation – particularly the turret adjusts.

The side-bolt runs a 14-shot Perspex fronted sprung magazine and the action operates as follows. First the side-bolt needs to be turned upwards and out of the front keeper slot and pulled fully rearwards, then turned down and dropped into the rear keeper slot. The magazine can then be slid out from the right of the action and requires you follow a specific procedure for filling.

This is as follows: with the main black plastic body casing facing you and holding the Perspex cover plate, you then turn the body casing anticlockwise until the cover plate releases from its catch point. Then you need to continue turning the main body in the same anti-clockwise direction until it comes to a natural stop. The first pellet is then inserted skirt first into the ‘rear’ side (side facing you) of the magazine.

Now you can reverse the magazine, so the Perspex face plate is on top (facing you) and then move the Perspex ‘screen’ clockwise until you see the next empty chamber. Pellets are now dropped nose first into the chambers as they appear until all 14 are filled. The magazine is slid back into the action from the right, you now lift the bolt up from the rear keeper, push it fully forward and return back down into the forward keeper slot.

The rifle is now cocked, and a pellet has been loaded/probed into the barrel. Incidentally, the cocking operation takes a bit of a hefty pull – a trait I surmise is due to the rifle having a strong hammer spring. Nothing that is of great concern though.

Now we come to the 2-stage adjustable Quattro trigger unit with manual safety. The trigger has a well curved polymer main blade and a small round-ended metal safety lever positioned directly in front; both set within the rifle’s polymer guard.

I’m sure the trigger’s name will be familiar to many as it’s been a mainstay now on many Hatsan manufactured air rifles and other ‘branded’ models and during that time has certainly proved its worth. The adjustments it offers are 1st and 2nd stage travel then the pull force itself. Thoughtfully, all adjustments can be made with the rifle left in the stock.

I decided on a 25-yard zero and due to the positive and user-friendly function of the scope the rifle soon proved to be highly accurate returning ragged clover leaf size .22 calibre groups at this range. Obviously, the trigger must also be given credit for this performance as it trips the sears very cleanly with no discernible creep.

The main feature well worthy of note here is also the Quiet Energy fully shrouded barrel and integrated sound moderator. This unit is a true all in one ‘envelope’ that covers the tube and is strengthened along its length by a very sturdy looking ABS barrel band.

This all in one shroud/ silencer is extremely efficient at taming muzzle report – thankfully so as due to its construction the moderator up-front can’t be replaced for another can of choice. In fact, discharge upon firing was so low, only the internal hammer can be heard upon releasing a shot. In fact, there’s what only can be described as a ‘boingy’ sound when a shot is taken which strengthens my believe that the rifle could be fitted with an overly heavy hammer spring. Again, I must stress. It isn’t so loud to be troublesome, but a factor that I’m sure a good air-gunsmith could remedy.

To sum up, I have to say I was mightily impressed with the Hatsan Flash QE and that’s not only due to it coming bundled with so many accessories. Having said that though, it must be noted this is a very thoughtfully put together package. As for the rifle itself, well it’s a little gem that handles and balances well, has a very low muzzle report, is very accurate and feels very nice in the hold. Also, it comes with 2x magazines a friction fit single shot loading tray.

It may seem strange at this juncture to revert to a rifle I mentioned at the beginning of this piece – that being the Hatsan Flash QE Bullpup. When you consider the performance of the standard QE rifle here on test then I’ve no hesitation in saying not only am I very keen to try one, but I reckon it’s going to be well worth any ‘pup’ enthusiast checking out.