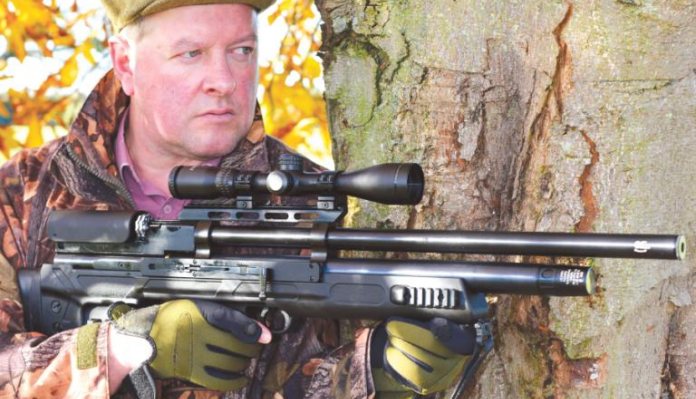 Trends come and go, but the current craze for the Bullpup configured airgun, seems set to run for some while yet. Just look, at the number of major manufacturers, now throwing their hat in the ring, and launching their own take on the theme. And it soon becomes obvious that this has become a growth sector of the market, with valuable sales volumes worth fighting over.

Turkish brand, Hatsan, have experienced a meteoric rise in the world of airguns, over the last decade or so, with PCPs in their burgeoning product line-up. So, it was only a matter of time before a full-blown Bullpup emerged from their factory.

Refreshingly, unlike several rivals, the Gladius has been designed as a Bullpup from the ground up and that means that instead of just taking an existing model’s action, and plonking it at the back of a stock, with all the awkwardness that this entails, Hatsan have had a proper muse over the layout. So, let’s nail the specification, and then we’ll work through the list of on-board features.

First impressions can’t be anything other than favourable, since Hatsan supply the Gladius in its own specially padded hard case, measuring 41x15x4-inches. This impressive protection even has shaped and padded recesses, for the rifle and a scope of your choice, along with storage wells for accessories and tools etc. The design is a bold one crammed with features, and certainly in your face! These include a dedicated, fully adjustable synthetic thumbhole stock, side-lever action, 10-shot magazine system (four included), full length barrel shroud, sling swivels and sling, and 2-stage trigger. Quite a package then, so let’s get started.

Take a close look at the Gladius, and it soon becomes obvious that Hatsan have designed the stock to be fully adjustable; and this is highly commendable. For a start, unlike some Bullpups out there, this model gets a proper cheek piece, instead of having to rest the face directly onto the action, and the benefits are two-fold. Obviously, comfort is kept at a premium, but there’s also the matter of safety, and having a cover that helps shield the face from the action, must make sense. The cheekpiece/ cover plate utilised here, sits right over both sides of the breech block, meaning the Gladius can be shot by left-handers too- but the clever bit is that it is adjustable for height, by simply turning that knurled wheel on the lower left side.

More adjustment comes with the butt section, and here, the pad itself can be raised or lowered via an Allen bolt at the rear, but also, the length of pull can be altered, by up to an inch, by slackening off the coin- operated bolts on the right-hand side. Slide the butt assembly in or out to achieve a perfect position, and re-tighten the bolts. Again, it’s neatly done, and cleverly executed.

Finish-wise, Hatsan manage a good standard of chemical bluing on both the full-length barrel shroud, and the main cylinder, but in terms of engineering and final metal finish, there are still a few machine scuff marks around the breech block, and some small signs of wear in the black coating around the edges of the magazine catch and side-lever. I’m nit picking of course, but just don’t expect perfection.

Time to get this Gladius scoped up, and here, we firstly need to source mounts/rings to fit the Picatinny specified rails- i.e. those with a small cross bar in their base, that locates across the slots in the rail. As with any Bullpup, by having the action set right to the back of the stock, the configuration dictates that the sighting system will have to be mounted over the top of the action, via what’s termed an intermount. Hatsan achieve this, by using two large supports spanning the cylinder and barrel. Invariably, this means a higher sight line than that of conventional set-up, and that may not suit everyone! But with the adjustable cheek piece combined with the significant stretch of scope rail, eye/scope alignment can be perfectly coordinated.

Charging the Gladius is a simple affair, and just needs the adaptor probe (supplied) to be inserted into the valve inlet at the front of the cylinder, once the super refined revolving dust cover has been opened for access. Just make sure the probe remains seated for safety, and this system can then be appreciated for what it is; namely one of the quickest out there. There is also a pressure gauge at the front of the cylinder (a popular but frankly dangerous location) so don’t find yourself looking down the barrel to read it!

All that remains is filling the magazine. Hatsan amazingly, supply this model with four x 10-shot mags, and with three neat magazine storage clips situated under the rear of the stock, it means we can be ready to go with 40 shots in reserve. Well, make that 30; as limited space around the front clip makes it almost impossible to remove this one. Whether this is overkill is down to you, but it will have an appeal to some shooters. To fit the magazine, there is a retaining catch which first needs to be pulled forwards, then pull back the side-lever. The mag will now pull free. Just fill the chambers in turn, and push it back into the slot in the action, close the clip, and return the side-lever.

Get to grips with the stock, and the soft touch rubbery feel impresses from the off. Another detail that really stands out with the Gladius, is that the beautifully shaped side-lever is perfectly positioned for operation within this Bullpup configuration. It does feel a little slack initially, along its arc of travel, yet it works very well over all. The 2-stage trigger here, is nothing special, but it does have a nicely shaped blade, and releases with only minimal creep. The down side is the automatic safety catch, which rather stifles any fast-fire plinking sessions. That said, it soon becomes second nature to nudge the safety forward, and that sleek side-lever means the Gladius can be cycled with the gun still in the shoulder. At 10.2lbs, it’s no lightweight, but with a centre of balance just forward of the pistol grip, I found kneeling shots particularly easy. For my style of shooting, prone feels a bit muzzle light, but we are talking bullpup here, so what do I expect?

The Gladius isn’t fitted with a regulator, so, as usual with any un-regulated PCP, care needs to be taken to charge exactly to the prescribed fill pressure- in this case, 200-bar. Further experimentation with slightly different fill pressures, in conjunction with a chronograph, will almost certainly arrive at an optimum number of consistent shots in a tighter band than my test has revealed. For the record, with the Gladius on test here, I still returned a highly creditable 74-shots with a total spread of 26fps, and 80 within 37fps.

In terms of downrange accuracy, that characteristic weight distribution synonymous with Bullpups in general (weight to the centre/rear section), did seem to help kneeling shots particularly, and with sub-1-inch groups easily achieved over my 30-yard test range, I was pretty impressed. The Gladius is a lump though at 10.2lbs, which is a consideration before buying. Shooting from prone, I managed average groups around 5/8-inches, although here, my taste for front-heavy guns would benefit from some sort of add-on, easily achieved of course, with that collection of accessory rails under the forend.

With that sizeable fulllength barrel shroud, it’s easy to expect a super quiet shot, but don’t be fooled. The resonance and ringing noise from the hammer is significant, so whilst the Gladius doesn’t have any harshness or crack, it’s not exactly whisper quiet either! Interestingly, Hatsan produce an FAC version of this model, and here you get a 6-stage power adjuster thrown in.

All things considered then, an extremely well thought through offering, from one of the most radical manufacturers currently producing airguns. The Gladius is likely to divide opinion, on looks alone, but if its macho styling appeals, and the weight doesn’t offend, then there’s plenty of technical detail to back it up, in a thoroughly enjoyable, well presented package.