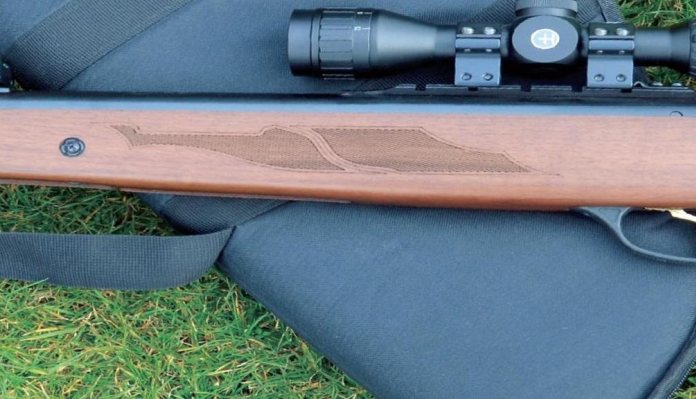 Few companies can boast such an impact on the airgun market over such a relatively short period of time, as Hatsan. Indeed, look at this Turkish manufacturer’s latest catalogue, and the only word that comes to mind is ‘prolific’. For this huge tome is just crammed with airguns of all shapes and sizes. Also, they aren’t averse to working with other manufacturers either, and their tell-tale hallmarks are often visible, but their list of own brand guns remains astonishing.

On test here is one of their soberer designs; the Model 95 Vortex GR; and a very smart design it is too.

Back to the Vortex system, and Hatsan produce these themselves, using only conventional air. If gas-rams are still a mystery, it basically sees a sealed chamber of air or gas placed behind the piston, in place of a normal mainspring. The air expands to drive the piston but stays sealed inside. Air in front of the piston drives the pellet in the usual way. Much is made of the perceived smoothness of the system, and we’ll see how it shapes up shortly.

There’s a high-quality, solid feel to this 95, and despite synthetics used for the trigger guard, safety catch block, sights and forend grip, precise engineering and a good standard of chemical bluing wins the day. Attention to detail, such as that adjustable breech bolt, is also impressive, meaning that any wear experienced in this area further down the line, can be literally nipped up in the bud.

That Turkish walnut, sporter stock is ambidextrous, and on test, felt well machined and finished. The butt’s a bit hard, but that sleek extended forend is great in the aim. A higher cheek piece would be preferable too, but the manufacturers obviously have one eye on using those excellent fibre optic open sights, which sit lower. Fitting a scope is simple, with a dual-width 11mm/1-inch Weaver-style, slotted base and a screw-on arrestor block.

Hatsan fit their Quattro trigger system to these rifles, and I have to say, it continues to impress, especially at this price point. The set-back trigger blade here is gold plated for a start, according to the catalogue, which is a classy touch. But more importantly, it’s at the perfect angle for a stress-free reach. For those who haven’t encountered one, the Quattro unit offers plenty of adjustment. First stage weight, travel, and second stage weight can all be finely set, all apparently whilst maintaining full sear engagement. In the case of this 95, after a short tweaking session, I ended up with a super light release, which is how I prefer it. Historically, I’m not the best when adjusting triggers, yet the last few rifles that I’ve tested with Quattro’s fitted, I’ve managed to master- which is probably testament to the design, and instruction manual!

Breaking the barrel takes a good old jolt, and you can either tap down from the front/muzzle grip, or, as I found, a gentle break over the knee and it falls open. The subsequent cocking stroke is then easy and impressively smooth, as it should be, given the Vortex internals. Good practise dictates that the barrel is firmly gripped in the left hand (if your right handed of course), for absolute safety, whilst a pellet is then pushed as flush as possible into the breech. Close it up and the safety catch at the rear will now have been automatically set. Nudge it off, and the shot can be taken. De-cocking of the action, with this model, is not possible, due to the anti-bear trap system incorporated, which cleverly prevents the mechanism from firing until the barrel is closedand I’ll settle for that!

Firing the Model 95 on test revealed quite a noisy action, and whilst there is no twang from a spring, there is plenty of clatter is it goes off, accompanied by a significant amount of recoil. The firing cycle certainly feels quick and is more of a snap, but lively and noisy is a fair description.

Chronograph testing was initially carried out with BSA Red Star pellets in .22, but after a quick flick across the calculator, energy figures equating to around 9 ft/ lbs seemed just a little too low! There’s a bit of luck in this area, with barrel compatibility sometimes dictating play, but switching to my usual benchmark JSBs, in this case Air Arms Diabolo Field, gave an instant increase to 10 ft/lbs; so, much more acceptable. Further experimentation is always advisable, but several brands later, and I was still with the Diabolos. Which offered a 10fps extreme velocity spread (ES) over 10-shots, straight from the tin, and groups of an inch over 30-yards, was perfectly acceptable for this grade of rifle.

Gas-rams can often be left cocked for longer periods, with no effect on power, which is a selling point for some. Would I favour this model over a comparable spring-powered Hatsan? Probably not, as in my experience, several of their springers are gentler in the shoulder. But that’s just me!

A trigger, which is vastly superior to many rivals in this price bracket, is obviously a great starting point, but the slick presentation, and quality of that stock, also make a good case, for this plucky little gun. Decent repeatable performance is possible, so maybe a case of try before you buy down the shop or club then.