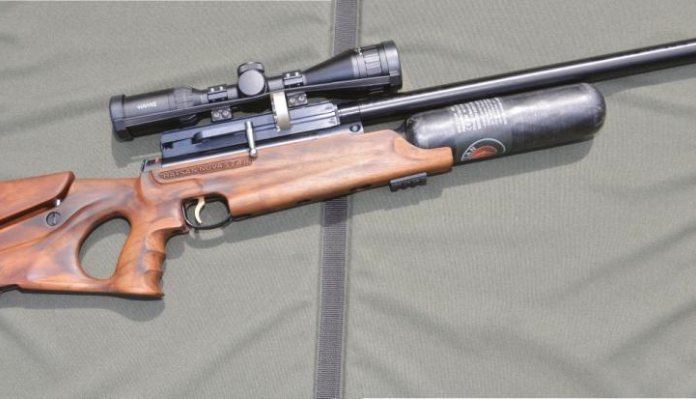 I feel privileged to have been invited to see around the factories of several big-name airgun manufacturers over the years and, whilst admittedly, I haven’t experienced Hatsan’s set-up, I can imagine the buzz generated, from such a huge operation. A workforce of 650, gives some idea of the scale of their facility, producing firearms of all kinds; this year they even announced a 22 Rimfire bolt-action, based, by the looks of it, on the old CZ452. However, as I have highlighted before, take a look at their product catalogue, and the sheer number of different airguns available, will induce a silly, open mouthed grin. For, and to put it bluntly; this Turkish manufacturer, is prolific indeed.

Shooting shows always showcase new models as and when available, and my last visit to the Northern Shooting Show up at Harrogate, now one of the most enjoyable events in the calendar, I hasten to add, did just that. UK importers, Edgar Brothers, had all the latest kit from Hatsan on display, and several new models caught our eye. On test here is the rather tasty Hatsan Nova Star and, I’ll stick my neck out and say in my opinion, arguably the best looking PCP from this company to date! It also reminds me visually of Daystate’s Wolverine.

The dominating feature is of course the buddy bottle configuration and here we see a state of the art carbon fibre 480cc air reservoir all part of the deal. Hatsan cram a lot of features in as standard with this model though, so let’s run through what’s on offer, before we get our hands dirty. The Nova Star shows a fully adjustable Turkish walnut stock, complete with thumb-hole configuration and magazine storage in the butt. There’s side lever cocking, an adjustable, 2-stage trigger, Picatinny-style accessory rail, manual safety catch, fully shrouded barrel, threaded muzzle for a silencer, probe-style loading, and the option of single shot or multi-shot, via the two magazines supplied. That’s some spec sheet for £545; so, let’s get started.

In terms of the Nova Star’s build quality, machine work is all pretty tight. Finish too, is up to scratch, with the matt black of the receiver, combining well with the blued finish applied to the full-length barrel shroud. OK; we’re not talking super deep bluing here, yet overall, bold styling and competent execution, gives the Nova Star great appeal.

I’ve never been a fan of garish, high gloss woodwork, so the matt finish here was particularly appealing. The quality of the walnut on show is excellent, with plenty of tasty swirling grain pattern, and a lovely mix of colour. The contoured drop down grip is really comfortable too, although the lack of some form of thumb shelf is surely a trick missed. The forend is at least a reasonable length, given that it has to stop short, to recess the buddy bottle; yet the addition of a small Picatinny rail, right where the forward hand sits, is slightly irritating. That said, three small screws, and it comes off, so just think of it as an extra when required, if fitting a lamp for a particular foray for example. Don’t forget that one of the two magazines can also be stored in the underside of the butt, just insert it and an integral sprung clamp locks it in solidly.

There’s plenty of option for fitting a scope here, as the Nova Star shows a Picatinnystyle base and a conventional 11mm dovetail rail too. Take your pick, then set about getting the sight picture to fall into place with the minimum of effort. Adjustable stock elements are rightly becoming increasingly common, and Hatsan have embraced the idea, with their more radical models, for some time. The rear rubber butt pad is nicely concave, so it sits in the shoulder, and can be set for height, by slackening the large central Allen bolt, and sliding up and down. In addition, the pad can be offset at an angle, by first unscrewing and removing the pad, then slackening off the two screws beneath and twisting the middle plate to the desired angle. Nip up the screws, then screw back the pad at the desired height.

Setting the cheek piece height is to be done in tandem with the butt, and here it just needs those large bolts to be slackened off, then it can be gently lifted or lowered, to set the correct contact with the face. Set the two, with gentle increments, until the eye/ scope alignment just feels right, and the job is done.

Charging the system is done with the carbon fibre bottle in situ and firstly needs the small nylon plug to be removed from the inlet valve. Initially, I found myself grumbling that the plug was too short, and very difficult to grip, but then the penny dropped. Just gently push the probe adaptor (supplied), fitted to the airline, into the inlet, and the plug will automatically be pushed out, simple and very neat. Charge slowly to 250bar, withdraw the probe, and push back the plug to keep out dirt. A manometer sits just underneath the forend, so keeping tabs on pressure is simple and also safe, as you’re not looking down the barrel to do so!

As mentioned, this model comes supplied with two, cassette-style magazines, which are very similar to the original Theoben design. A lairy red centre gives them a flashy look, capacity is 12-shots in .22 calibre, (on test) and 14 in the .177 version also available. To prime the magazine, twist the clear casing against the spring pressure, anti-clockwise all the way, and when it stops, drop a pellet, skirt-first into the one exposed chamber from the reverse side; then feed pellets headfirst into each chamber from the front, until full.

Now, we are ready to see what the Nova Star can deliver, in terms of performance. First, pull back that stylish side-lever until the hammer and trigger are set and, with the lever fully open, insert the magazine into its slot within the action, from the right-hand side. Once fully in place, close the lever, and the first shot is ready. If that side-lever looks familiar, it’s been lifted from Hatsan’s Galatian and Gladius models and, in use, it feels super slick. Cocking effort is minimal with this set-up and on test, the cycling of the bolt worked smoothly and faultlessly.

Which is more than I can say for one of the magazines, which seized up over the course of my test, whilst I was trying to fill it. You can, as mentioned, shoot the Nova Star as a single shot, and that just requires the side lever to be pulled all the way back to cock the action, the mag pulled clear, and the small single shot tray snapped into its place. In practise, it is possible, but a little fiddly, given the very narrow channel, into which a pellet needs to be rolled.

The 2-stage, trigger mechanism fitted, gets an attractive, wide blade, and is adjustable for travel and pull weight. I left it at the factory setting, which, whilst there was some creep, still had a fairly light release pressure. The manual safety catch is smart, despite incorporating the only plastic component of the main action and has more than a passing resemblance to the old Webley Omega pattern. The Nova Star isn’t whisper quiet, despite that huge barrel shroud, but the shot release is more of a satisfying snap than anything else. Unscrew the muzzle cap, and the shroud can be removed, and a silencer screwed onto the thread; but be warned, as both balance and looks may be compromised.

OK, facts and figures time. That sizeable 480cc carbon fibre buddy bottle should equate to a large shot count and, on that score, and from the prescribed 250bar fill pressure, I recorded a maximum of 338-shots, within a total spread of 56 fps, using Air Arms Diabolo Field pellets.

Admittedly, that is quite a velocity spread, but if just practising or plinking, then it’s a very usable figure indeed. Stick to the first 156-shots however, and consistency reduces to a far more useable 30 fps, so a versatile tool for sure. So, what about accuracy? Well, my initial warm up session over 25 yards resulted in ragged clover leaf groups, which impressed from the off. Moving back to 35 yards and this Hatsan managed sub ¾” clusters with ease; so no, it’s not just about looks with this model.

Subtlety is very much creeping into the equation at Hatsan and this new Nova Star is frankly light years away from their early pre-charged offerings. It looks superb and, with that highly extensive list of on-board features, and competent performance, it represents great value for money, for fans of this style of airgun. Super Nova indeed! So, it just remains to deliver one final message to that overworked design team at Hatsan; for heaven’s sake take a break!