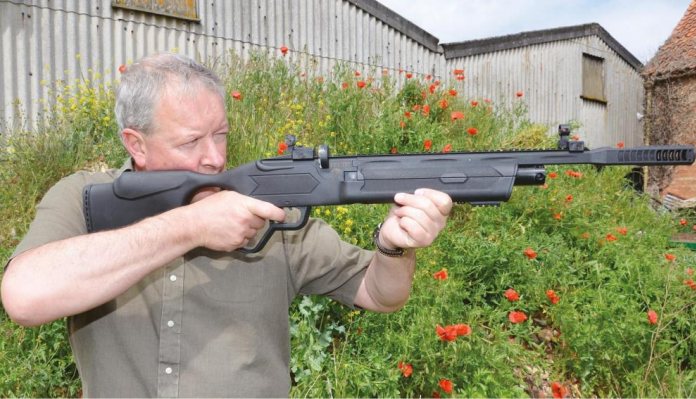 A recent flurry of new models from Turkish giant, Hatsan, has been turning a few heads, and on test here is their brand new Vectis, which, it’s fair to say, doesn’t just follow the crowd! Extensive use of plastic will already have many an enthusiast turning out the light, locking the door and throwing away the key. And first impressions, if I’m brutally honest, are of a less than sophisticated air rifle. So, bear with me on this one, as this rifle can’t be so easily dismissed!

Receiving a parcel with one of the other new models from Hatsan, the Nova Star, in the same box, was never going to help the cause either, as the aforementioned just happens to be arguably Hatsan’s best looking airgun to date. Alongside it, the Vectis, clad almost entirely, from muzzle to butt, in black plastic, was never likely to impress. And if you really can’t abide military styling on an airgun, then that’s perfectly understandable, then this rather unusual, dare I say unique design will have zero appeal; end of. Yet, for those that do enjoy an injection of fantasy and take a generally more relaxed approach to our great sport, it’s time to put all that negativity to one side. So, I say even as a traditionalist; embrace what it is really all about, fun shooting on a budget.

Just £268 secures this rifle as seen, so I think we can all agree, we’re talking bargain money for a pre-charged pneumatic. Admittedly, that bold styling will divide opinion, but the Vectis is clearly greater than the sum of its parts, so let’s peruse the fairly radical spec sheet on offer.

Vectis is the Roman name for the Isle of Wight incidentally, however and in this case it also means lever, which is very apt as we shall see! It offers a PCP action, with a short cylinder, a fully plastic shrouded barrel, integral muzzle diffuser, probe-style charging, moulded synthetic/plastic stock, removable and foldable fibre optic open sights, 2 magazines-12 shot in .22 calibre, and 14 shot in .177, charging adaptor, instruction booklet and a standard procedure from Hatsan these days; even a spare seals kit. I have of course, left the best till last, the rifle is operated by a lever-action style cocking lever and it’s this feature that really dictates the play.

Pick up the Vectis, and the ergonomics of the configuration immediately become apparent. The forend is unusually long, which means the leading hand feels comfortable and supported by the flared moulding, complete with finger grooves, yet still stays clear of the accessory rail positioned underneath. Equally, the soft, rubber, recoil pad is excellent, but the cheek piece, whilst perfect for the open sights, may be slightly low for scope use. I’m nit picking here though, as a non-adjustable butt obviously keeps costs down, and will always be something of a compromise.

As it stands, that raked thumb hole and grip work well, and my hand fell naturally into place. With hardly any metal on show; yes, even the majority of the breech block is plastic, build quality is never going to be a selling point with this model. Features such as the two-part plastic scope rail (Picatinnystyle) will always look fairly crude. That said, the Vectis has a solid feel overall and, once you just take it for what it is, it’s a wellexecuted, valid and appealing design.

As mentioned, Hatsan include a small tube with all manner of O-rings and spare seals with this model, and for the more knowledgeable enthusiast, it’s a really nice touch. Of course, for many of us, dismantling an airgun, especially where high pressure air is concerned, may not be the best use of our Sunday, and may be best left to a qualified individual, who knows what he’s doing. That said, it’s the sort of attention to detail that’s starting to get Hatsan a reputation.

Filling the onboard cylinder to the prescribed fill pressure of 200bar, is done using the charging adaptor supplied. With this threaded onto the airline, be that bottle or pump, the probe then needs to be pushed into the inlet valve, which sits at the front of the cylinder. Hatsan fit a neat plastic plug that sits inside the valve, to keep out dirt, and initially I found myself grumbling that the plug was too short to grip to pull out. The solution is of course obvious. Just insert the adaptor probe, and the plug pushes out the other side; oh dear, I’m new to this game, you know!

At this stage, I would always advise caution, and to check that the probe is still fully inserted, a short way into the charging regime, when a small amount of pressure has already built up. Slowly build to 200bar and shut off and bleed the airline. Replace the plug, and it’s job done.

Two plastic bodied magazines (there’s a theme here) come supplied with the Vectis, as mentioned, and loading them requires the front clear cover to be twisted anti-clockwise, all the way round, then gently holding against the spring pressure, insert one pellet skirt first, into the one exposed hole in the back. Then, load pellets one at a time headfirst from the front, until the mag is full. Time for some fun, I believe!

Obviously, the rather unusual open sights are a key feature with this rifle, so don’t rush to fit any glassware. I was keen to see just how well the Vectis could group, straight from the box in any case. Fibre optic inserts have been around a good while now, and the principle, for those unfamiliar, is for the fluorescent element to pick up ambient light and create a bright sight picture, even in fairly gloomy conditions. Both the elements (front and rear) are self-contained units, which can be clamped anywhere along the top rail, or removed altogether, which is a novelty in itself.

The configuration of the Vectis means that everything can be set up to give a really long sight line, which always aids accuracy. The rear is effectively a peep, with a small circle/ aperture and a bright green dot either side. It’s fully adjustable with dual finger wheels for both height and windage and has graduation markings too to keep track. Centralise the rear circle with the red foresight, and you’re in business. Further novelty comes with the way both units can be neatly folded down out of the way, and in use, the picture offered was excellent.

Cycling the action with the right hand, can be done with the gun in the shoulder, although the cocking effort is a little more than expected, so not quite as fast-fire as I was hoping for. That said, technique and familiarisation play a part, and I was still getting plenty of shots off and having a whale of a time on the range. Cycling the grip lever, cocking the action, and indexing the magazine, all worked perfectly, with not a single blip throughout my test period.

The feel of the trigger was a little inconsistent, sometimes feeling almost a single stage, then having a small amount of movement; but with a pretty light release, I would say it’s still above average, and pleasant to use. On the test rifle, the safety catch failed to fully engage once the action was cocked, so if you really feel you need to use a safety, just apply before; probably the safest route anyhow.

Muzzle report with the Vectis, is also quite appealing, with more of a muted metallic ring, probably from the hammer, rather than any significant crack of air blast, and this will be partly due to that muzzle diffuser, seeing the pellet pass through no less than five sectors. With some highly encouraging groupings to show for my efforts, I finished with the impression that this rifle was inherently accurate, offering plenty of reward when I took my time. Slow, deliberate grouping with the open sights, shot over 25yds, returned clusters just marginally larger than an inch, which is pretty damn good in my book. Groups half that size are possible if you go to the trouble of clamping a scope in place; but with those super cool open sights ready and waiting, I’m not sure I’d bother. In terms of shot count, I managed just under 40 within reasonable consistency, but if you don’t mind the velocity variation, then you’re good for 90 plus.

All well and good then. So, we’ve confirmed that the Vectis is a capable piece of hardware. But ‘slow and deliberate’? Really? I think not. Get down to a practise range, plant this rifle in the shoulder, handle that lever, and cycle the action just as fast as you can, and even with the open sights, the spinners will fly.

Radical styling and great fun, and why the hell not? Nice one Hatsan; bit of alwight indeed!