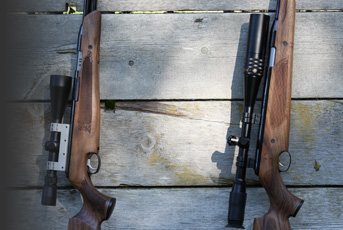 I don’t have a popular Sunday night TV show (not yet at least) so I’m not going to have any kind of scoring system, I might do a couple of side by side challenges for comparisons sake but I know I am going to have some fun testing these two rifles.  As for the conclusion, well that’s up to you, hopefully I might just help you make up your mind when you are stood in the gun shop deciding which rifle to buy.

Both these rifles are traditionally powered using a spring driven piston.  This is a major part of the appeal of these guns as they do not rely on external sources of compressed air or CO2.  These rifles have been around for some time (21 years in the case of the TX200) the original versions came out just as pre-charged rifles were becoming cheaper and therefore more popular, yet they have survived the flooding of the market with such rifles.  So there must be something special about both the TX200 and the Pro Sport.

The rifles on test have walnut stocks and both are .177 calibre.  The TX200 is the Hunter Carbine (HC) version of the range.  If you don’t have the budget for a walnut stock (or just don’t want walnut) beech stocks are available on all models, and of course you can have .22 calibre if that is your preference.

Of the two rifles the Pro Sport is the more expensive.  The model tested here can be found for about £480 which is roughly £80 more than the equivalent, walnut stocked TX200.  You’ll save yourself approximately £50 if you go for the beech stock option.  So these aren’t budget spring guns, and on the basis of cost place themselves head to head with many of the aforementioned pre-charged pneumatics.

As you would expect with two models manufactured by the same company, there is some family resemblance, the Air Arms website even describes the Pro Sport as a refined version of the TX200.  The major difference is in the cocking arm and the distinctive look that it gives each rifle.  It is obvious at a glance that the TX200 is an under lever rifle, it isn’t until you get up close to the Pro Sport that it becomes apparent that this too is an under lever rifle.  The Pro Sport has a cocking lever which is concealed within the fore-end of the stock and this gives the Pro Sport its clean lines.

The affect that the difference in the cocking mechanisms has on the handling of the rifle I will come on to later, but first the nuts and bolts bit…

You would hope that after spending the better part of £500 you would be able to see where the money has gone and there is definitely evidence of money well spent in the finish of these rifles.  The blueing is a rich deep black and while this will require looking after, I still believe it is the best looking finish for a sporting rifle. The high gloss of the action is complemented by the satin finish applied to the walnut. Both the test rifles stocks have nice figuring which is further enhanced by capping on the pistol grip.  The TX200 has exotic ‘fish scale’ design panels on the stock fore-end and pistol grip, the Pro Sport on the other hand displays a more traditional skip chequering design in the same positions on the stock as the TX200.  The TX200s ‘fish scales’ provide really good grip as well as making an aesthetic change from chequering or stippling, but I prefer the chequering found on the Pro Sport.

Staying with the stocks for a moment longer, both have a sporting profile with nicely proportioned pistol grips and a rollover cheek piece high enough for use with a scope, which is just as well as no open sights are provided with these rifles.  The fore-end on the TX200 is nicely rounded and becomes deeper towards the pistol grip.  The Pro Sport fore-end has a squarer shape with a flat base (dictated by the recessed under lever) and tapers towards the muzzle with a rounded finish as opposed to that of the angled TX200.

Air Arms use the same trigger unit on both these spring guns and it is difficult to fault.  The trigger has a number of different adjustments including weight of pull and stage lengths.  Setting up a trigger is something of a dark art but I managed to adjust the trigger on the Pro Sport without swearing or cursing.  The trigger unit gives a nice crisp let off without being overly heavy and I don’t think you could blame it for any pulled shots. Nicely curved blades are fitted to the TX200 and Pro Sport in keeping with the sporting feel of the guns, with the latter’s being made of brass.

The compression cylinders of both rifles are to all intents and purposes the same.  Located at the rear of the cylinder is a push button safety catch.  Deep dovetails run for a good length towards a sliding breech and the barrel is centred within the cylinder.  Just behind the breech of the TX200 a sprung loaded catch prevents the breech being closed without the catch being depressed. This releases the ‘ratchet safety’ that comes into play whenever the TX200 is cocked. I find this safety feature slightly annoying to use, but should the piston be released by accident, it would save your fingers.  This is a feature not shared by the Pro Sport, however it does have an anti-bear trap device within the cocking mechanism.

Both rifles have Lothar Walther barrels fitted and these sit within an outer shroud which acts as an efficient sound moderator.  Whilst the shroud is primarily there for sound moderation it also gives a thicker profile to the barrel adding to the sense of solidity these rifles possess.

Pellets are directly loaded into the barrel via the generously proportioned sliding breech which opens as the rifle is cocked.  Directly feeding the pellet into the barrel gives the shooter a chance to weed out poorly fitting pellets that other methods cannot hope to.  Replacing the under lever to the rest position closes the sliding breech ready for the shot.

There is little to fault with the construction of these rifles.  The finish is what you would expect and the mechanicals feel solid and well made.  I checked both rifles on a chronograph with a variety of pellets and the results were fine.  Energy levels were comfortably under the legal 12ft/lbs limit and consistency was excellent.  In fact they weren’t really any different to my top of the range pre-charged pneumatic Field Target rifle.

Of course all of the above means very little if a rifle is difficult to use and won’t shoot straight, so what are these rifles like to actually shoot?

The balance is the first noticeable difference between these too rifles.  The TX200, as you would expect, feels more front heavy than the Pro Sport which is more centrally balanced.  Both rifles are fairly heavy, the TX200 being 4.2 Kg (9.26lbs) and the Pro Sport 4.1Kg (9.04lbs).  With either rifle shouldered the weight isn’t noticeable, despite the different balance characteristics, and that weight adds to stability when aiming.

Once scopes are mounted, obviously the next step is to cock and load the rifle.  I am sure you wouldn’t expect either of these rifles to be easy to cock given their near legal limit performance but in this area the TX200 definitely gains points on the Pro Sport.  The under lever positioned as it is on the TX200, under the barrel, seems to be in a more natural position for cocking.  Held in place by a sprung loaded ball the lever is simply released and a knurled cocking aid (fitted to the Hunter Carbine model only) helps with grip as the lever is drawn down through its stroke revealing the breech as it goes.  Whilst still holding the cocking lever (recommended with any rifle of this type) it is then easy to turn the rifle and load a pellet directly into the barrel.  Depressing and holding down the catch behind the breech (losing the TX200 some points) allows you to return the lever to its original position.

The rifle comes up on to aim nicely and flicking the safety catch off with your thumb becomes second nature after a few shots.  The curved blade of the trigger wraps around your finger and once the first stage is taken up further pressure crisply breaks the trigger.  The action of the TX200 feels fast and sharp with the recoil coming straight back towards your shoulder thanks to that bit extra front end weight.  There is no twang from the mainspring, even straight from the box, and I really can’t say I have noticed much noise from the muzzle either.

Cocking the Pro Sport takes a little more getting used to than the TX200.  A little recess allows a finger to pop the lever down allowing you to get your hand around its square profile.  A similar effort is required to cock the rifle as the TX200 but it definitely feels more awkward initially.  Trying to hold the lever whilst loading takes a little getting used to.  However once the lever is returned to its home position it is the same routine as the TX200, up on target, release the safety, and then the shot.

The Pro sport doesn’t feel quite as quick as the TX200 and with less weight towards the muzzle you have to concentrate a little more to keep the muzzle down.  That said it does feel a little smoother, noise levels are the same as the TX200.

As for the accuracy, well I think that depends on how good you are.  I have been witness to some stunning performances with both these models.  Make no mistake though, if your technique is anything but perfect you won’t get the most from these rifles.  There is little doubt that pre-charged rifles are very forgiving and therefore reasonably easy to shoot well but there is something very satisfying about getting it right with a spring gun.

It’s up to you

There you are then, stood in the gun shop with £500 burning a hole in your pocket.  Side by side stand an Air Arms TX200 and Pro Sport, both dressed in nicely figured walnut stocks.

Here’s the dilemma.  Of the two guns I have on test the TX200 is the gun to buy with your head.  It is the easier to handle and the extra front end weight combined with the fast action make the accuracy potential of the rifle more accessible.

On the other hand, the Pro Sport feels lighter, it is a little harder to shoot well, but it does have the looks.  The Pro Sport is the gun to buy with your heart.

If it is any help at all, I’m keeping the Pro Sport.