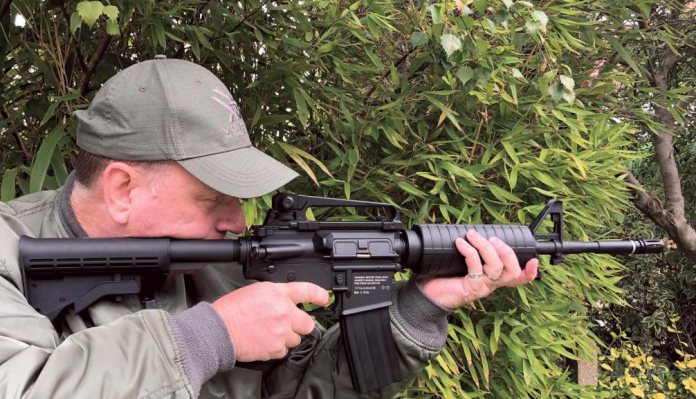 I’ve been shooting straightpull AR15s for nearly two decades now and use them when taking part in Civilian Service Rifle competitions at Bisley and also when I fancy using something other than my usual bolt action Anschutz rifle in 22 Hornet when out controlling foxes.

The AR15, and its predecessor the AR10, have been around for more than half a Century but are still going strong and variants are used throughout the word by armies, police forces and civilians. We aren’t allowed to shoot them as semi autos in this country any more, unless they are 22 rimfires (see Pete Moore’s review in the firearms section of a couple of custom rifles) but they are still incredibly popular, even with no gas mechanism to load and eject ammo.

Ergonomically, they are absolutely perfect straight out of the box, as the comfortable pistol grip, butt and forend make for a very shootable rifle and the magazine release, bolt catch and safety are all just where you want them. I love shooting my AR, so I was therefore very keen to see how a steel BBfiring version would perform!

When I opened the box, I was actually very surprised at how authentic this unusually-named CO2 replica was. The fit and finish of the upper and lower receivers is very good indeed; in fact, it’s actually better than some genuine ARs I’ve handled! I guess that the parts are cast and then machined in all the critical places and the factory have done a very good job of it I must say. The weight is a pound or so lighter than the real thing but with a magazine fitted it’s a decent weight of 5lb 4oz.

Starting with the ‘lower’, there’s the familiar, drop down grip, complete with ‘A2-style’ finger ridge; it’s made from a similar looking plastic to the original but I understand that it’s not possible to swap it for a ‘real’ grip, unlike the buttstock but more on that later. On the left side of the action is the safety catch that rotates from SAFE (forward), to SEMI (up) then AUTO (rear) but unfortunately the Hellboy is single shot only in the SEMI position but I guess it’s actually a good idea, as who knows how many BBs you’d get through if it were full auto! There’s a dummy bolt hold open catch but it’s nice that it’s there for authenticity’s sake.

On the right side, within easy reach of the trigger finger is the chequered, push button magazine release catch; press it on the real rifle and magazines drop free but you have to pull them free on the Hellboy but that’s also a good idea, as there’s a lot more to one of these mags than the original and dropping it could damage the internals. There is a springloaded ‘forward assist plunger’ but as there’s no actual bolt, it doesn’t actually do anything but once again it’s very nice to see it there, so that real drills can be practiced. The trigger looks a little different to that of the original and pivots slightly differently but that’s to be expected, as this is a BB gun after all.

Attached to the rear of the lower is the ‘buffer tube’ that would normally house the bolt return spring and plunger; here it’s empty but the sliding buttstock looks perfect and adjusts in the same way as the original; grasp the locking catch and slide the butt along the tube until the desired length is obtained. If you fancy swapping the standard offering for something more modern, you can and something like a Magpul stock would look great.

Moving on to the ‘upper’, there’s more good news, as it’s just as authentic looking as the lower. The handguard is just like the original and is formed from two parts; they are held in place by the spring-loaded ‘delta ring’ and I understand that it’s possible to remove them and fit some aftermarket versions. The ‘T-handle’, used for cocking the original even pulls back and opens the ejection port cover! The barrel has the same profile as an original M4, complete with the slimmer portion that is used to mount a grenade launcher, but I doubt many with fit one to a Hellboy… The ‘flash hider’ finishes the end of the barrel nicely and there’s even a silver ‘crush washer’ between it and the barrel, to keep things looking realistic. I actually think that re-enactors will buy Hellboys, as they would be much cheaper than a deactivated M4 and of course you can actually shoot them.

As with a real M4, there is a removable carry handle/rear sight unit, held in place by two thumbwheels. The rear sight is fully adjustable for windage and elevation and the rear appature can flip over, to offer a large or small ‘peep sight’. If you want to fit a scope, reflex sight or red dot, the unit is removed to reveal the Mil-spec standard Picatinny rail. Any optic that has been designed for a real AR will fit and Weaver/Picatinny rings can be used for mounting any scope; so, the Hellboy really is a pucker bit of kit.

Heart of the matter

All this is all well and good but how does this rifle actually fire BBs? Well, the answer is in the magazine. The mag has a dummy outer shell but the removable inner is what makes this gun tick – or is that bang, bang, bang? A sprung catch on the right side is pressed in and the inner portion removed. The base of the inner has a screw in cap that is loosened with the supplied Allen key, so that a CO2 capsule can be fitted. Once in place, the cap is tightened until the bulb is pierced; a hiss is heard and the Allen key tightened until the hissing stop, which signifies that a good seal has been made.

Steel BBs are housed in a stick magazine built into the front of the alloy body and a sprung plunger is pressed down until it can be pushed across into a slot where it is retained. BBs are placed one at a time into the hole at the top of the housing, until a total of 18 are in position. With the safety applied and a full mag of BBs and a capsule fitted, the inner can be slid into the outer and until the sprung catch clicks into place and you’re ready to engage!

Take off the safety and as soon as the trigger is pressed, the ‘hammer’ activates the mag’s internals, which sends a blast of CO2 through the magazine, sending a BB down the smoothbore barrel. Even using the open ‘battle sights; accuracy was good, with most BBs going into a reasonably small group at 10 yards. I shot the middle out of a lot of target cards but engaging empty drink plastic bottles was much more fun and you could soon have them dancing about on the grass. I even hung some plastic bottles on string and it was great fun seeing how quickly you could hit them, one after another. I did make sure that I wore a par of safety glasses, a rather stylish pair from Sunglasses for Sport actually, just in case a ricochet came bounding back towards me – I really value my eyesight!

You’ve got the power!

I was delighted to read on the box that the Hellboy was quite powerful and at around 495 fps, I think it’s just right. I got about 100 shots from one CO2 capsule, which is pretty good and I really enjoyed shooting this great little rifle. It’s no ‘tack driver’ but it’s not meant to be and it’s still a lot of fun. I even used it for some ‘standing then kneeling’ practice and I hope my scores in the coming CSR winter league improve. I have actually bought the example I have here, as it’s just so much fun to shoot!

To conclude, I’ve really enjoyed my time with the Hellboy and if you enter the competition, you can win one, thanks to the distributors iWholesales!