History of the HW35 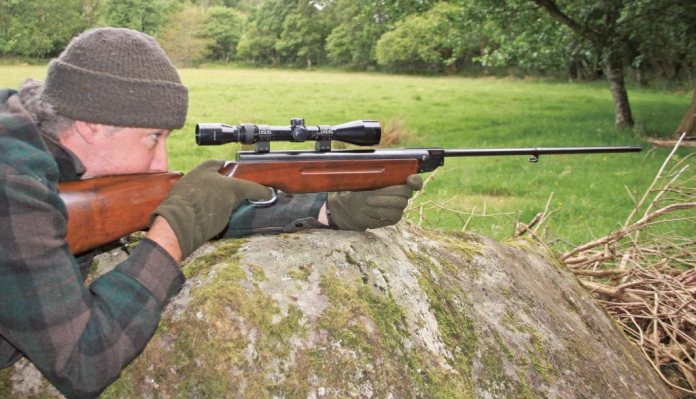 The HW35 was my first air rifle and will probably be my last! Like me, it’s a bit long in the tooth, showing its age but when push comes to shove, is still capable of providing a good hunting experience.

First up, I know springers are a bit old-hat these days but that’s why I like them, they make you work hard to get your game, as they can be unforgiving. I cut my hunting teeth on my .22 HW35 purchased from John Powell’s gunsmith when I was a teenager and cost me £50. I could only afford a STD model but I learnt pretty much all there was to learn about hunting, ballistics and proper hold with that old gun.

I still love the HW35 and although the styling may be considered tired, the performance, power, and accuracy are still very relevant today. I decided to dig a little deeper into the history of the HW35 and soon found some interesting special additions and there are new variants still being produced today, as the HW35 is still a good seller.

1899 was the year that Hermann Weihrauch senior started his business in the German town of Zella-Mehlis. Life started out with rifles and shotguns and then bicycle parts, not airguns. It wasn’t until after the war, when the borders put the old factory in Russian hands that Hermann Junior moved the business to Mellrichstadt, where it remains today.

The first airguns started to emerge in the 1950s and this was the HW50 with a smooth bore, as rifled barrels were not allowed at this time, nor cartridge rifles. So, Weihrauch thought in that case, I will make the best air rifles available, and I have to say, I think he achieved that goal. The HW35, a full-sized air rifle, appeared in 1951 and is still in production today, with very little design alterations, except upgraded internals and materials. The HW35 was a classic break barrel, spring propulsion air rifle capable of decent power for hunting, yet being able to achieve very good accuracy.

Weihrauchs are superbly built, there is no doubt about it, they are massively over engineered, which is a good thing, as most airgunners are tinkerers and they have to put up with a lot of abuse.

The HW35 has a very distinctive design and although it may not be as svelte as the newer HW95 or HW85, it has a charm all its own, well I think so! The standard HW35 was 44.75-inches long and sported a 19.75-inch barrel, with a diameter of 0.586-inches and available in .177 or .22 calibres only. Rifling lands are six in number, right hand twist with a 1 in 16.5-inch twist rate. They are very shallow lands to minimise pellet skirt deformation. Other models, such as the Export wore a 22-inch barrel and later carbine (or Karbine) models have 16-inch barrels.

Open sights are attached to the barrel via a dovetailed foresight, with Weihrauch’s replacement five element system. The rearsight was equally as good, with an all metal fabrication and elevation and windage adjustment, with solid clicks and a single U notch element on old models. Today, it is a four-notch rotating element. These have not changed for decades, although the new HW35 has a slightly more enclosed rear sight.

The main characteristic design that sets the HW35 apart from its siblings and rivals, is the barrel locking mechanism. It’s a marmite affair, some hate the looks and inconvenience of the design, I love it and appreciate the solid lock up it maintains. The large barrel catch is sited in the left side of the barrel receiver block and has a well-grooved, protruding release that is best done with the left-hand thumb, whilst the fingers rest on the top of the barrel. Once pushed forward, the barrel can drop and swing to cock the HW35. When the barrel is returned to battery, the barrel catch’s rounded bottom edge smoothly rides down the face of the air cylinder and then locks securely in place.

This is a very good idea, as break barrel’s Achilles heel has always been the mating of the surfaces of the barrel and air cylinder. The HW35, as with the HW55, have different locking mechanisms but each is designed to ensure a tight repeatable lock up to maintain accuracy and consistency.

Droop barrel, oo-er missus! Again, very Weihrauch, the barrel has a built-in droop, people assume it is bent but it’s meant to be like that; if it is straight or slightly raised then, yes, it is bent. You usually need a droop compensating scope mount to compensate.

Another oddity on older models, like mine was the annoying ‘clack’ noise on cocking from the barrel linkage. It is articulated, and as you cock the HW35, the joint used to snap against the receiver under the spring tension. This was cured by a roller inserted into the linkage. The air cylinder is 1.36-inches in diameter, a larger version of the HW55 at 1.17-inches, and has a large screw-in end plug that houses the trigger unit. As with the barrel, it has a good blued surface, not shiny but durable.

Older 35 pistons used a leather seal and power output was around the 10.5ft/lbs mark. My original HW35 had one such seal and it was screwed into the top of the piston, and so long as it was supple, it was reliable. It was later replaced with a synthetic seal, which is more efficient. The spring is a typical round profile, but as one would expect, aftermarket replacements abound, with Titan and Ox all providing that extra oomph many owners may require.

The spring guide is steel and there is no piston sleeve to retain the grease around the spring but it is a bomb-proof system that responses well to tuning. The end cap unscrews to release the spring tension and internals for servicing but it’s under pressure, so take care! Also, because the dovetail scope mounting rails are cut directly into the top of the receiver and end cap, they have to match up when you re-tighten. Older models had a 13mm dovetail and new versions have a standard 11mm width. Also, Older models did not have a safety catch; today, a sprung catch situated in the left rear of the end block automatically sets on cocking but is not resettable.

Now the crowning glory, the Rekord trigger unit. This was the reason that many hunters or shooters like myself chose the HW35; its trigger was far superior to anything else on the market. It is near match quality and adjustable for first and second stage and fine pull weight adjustments. The trigger still remains today and contributes to the HW35’s fine accuracy and appeal.

The HW35 has had several incarnations of the stock design. The basic or standard model has a no-nonsense beech sporter stock. It has a characteristic rounded pistol grip on the earlier models, today it is flat. The recoil pad was originally a plastic plate and then red rubber, it’s now brown rubber.

The forend has the characteristic HW35 finger groove along its length, common to all models except the Deluxe version which was flat. All versions however had the typical cut out in the left side forend section to allow the barrel catch to complete its long cocking arc. Some do not like this, as the stock cannot extend past the barrel receiver hinge, which looks nice on models like the HW80 and HW95; me, I like it and its typical HW35.

My favourite edition of the HW35 has to be the HW35LS or Lochschaft, which was a thumbhole-stocked version introduced in 1977. I remember Leslie Bowler of London selling these for £70 and by pure chance I picked up an LS recently. It is lovely, it has that typical ‘sod the styling’ approach to thumbhole designs that Weihrauch still have but it’s all about feel and ergonomics. Again, no cheekpiece, so good for left or right hookers; the very large thumbhole is really comfortable and lovely to shoot. You have to be very careful with the breech catch cut out on this stock, as it is larger than normal and the bottom spur is very thin and easily broken.
In 1986, Weihrauch also brought out a Safari version of the HW35, which is now very hard to find. It is instantly recognisable by the green lacquered beech stock that gives an almost laminated 3D effect, which I like. The metal is also finished in a dull or matt blue, or almost Parkerised, finish to stop glare and a green tinged leather sling was also included.

A HW35 STL or Stainless Steel Look version was produced in 2004, which had a black synthetic stock, although it looks like a black painted beech stock to me and a nickel finished action and barrel.

In 2006, to celebrate 55-years in production, Weihrauch made a limited edition run of 1000 HW35s, available in .22 calibre only, called the Jubilee 55 Edition. This was quite special, with a sound moderator fitted to the 16-inch barrel and an engraved action with the words ‘Jubilee 55’ etched in gold. Best of all, was the psychedelic blue, green and lime green laminate stock but of the same design as the HW35 form. I believe these proved so popular that after the 1000 were sold, a similar model called the KLS (Karbine laminate stock) was produced and is thus marked.

There are other various versions for USA customers, such as the nickel finished HW35E, which is very classy looking and let’s not forget the Norman May Vixen, which was a superb, customised HW35 with individually tuned internals and a nickel-plated breech catch and Vixen engraved to the right of the receiver. Venom versions included some tricked out stock designs and ultra-smooth, full-power custom internals for sublime accuracy and power.

Due to the enduring qualities of the HW35 series of air rifles, as you can imagine, it is well served by aftermarket spares and tune up kits. Firms like TW Chambers and John Knibbs hold a huge array of spares and tune up kits for the HW35 and of course Hull Cartridge Company hold authentic Weihrauch spares. As well as tuning up a HW35 by replacing the old springs and metal spring guides with synthetic ones and top hats and compression washers, which aid in a smooth spring release and power, piston/spring sleeves, set back triggers and stocks are all also available. V-Mach also offer a bespoke HW35 tune up kit and can provide their V-Tech moderator to fit screw cut carbine barrel that look really tasty. Steve Pope also offers resettable Rekord trigger safeties, which are worth the money.

Not the prettiest but certainly one of the most enduring spring air rifle designs ever invented. I cannot imagine never owning or hunting with an HW35 and for a newcomer, seasoned shooter or just someone wanting to relive their teenage years, the HW35 is really the only springer you need.