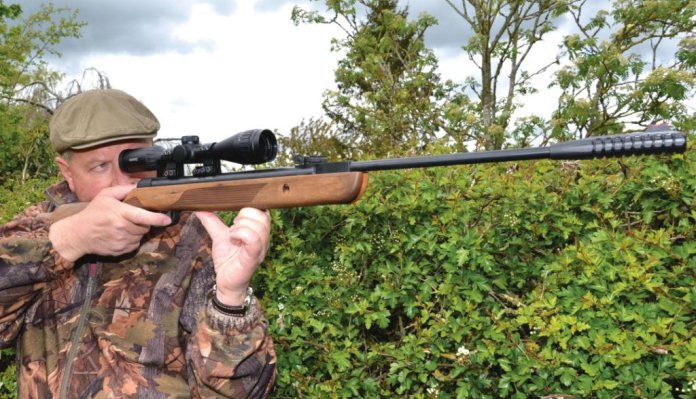 I don’t mind admitting I love the traditional break-barrel configuration and undoubtedly some of that affection stems from my own ‘first gun’ experience. The sheer simplicity and stress-free nature of this type of airgun explains their continued popularity, and despite a plethora of alternatives being made available to today’s airgun enthusiast, this time-honoured design shows no sign of relinquishing its ‘best seller’ crown.

On show here is a slick little sporter from Turkish manufacturer, Kral. It’s their Devil model, and in Walnut specification it’s a real head-turner.

When I first opened the box, I was instantly reminded of an old favourite rifle from the late 80s, since there is more than a passing resemblance to the BSA Mercury-S. I’ve had an appreciation for a piece of walnut since my early days of touring gunshops with my father, trying to pick the very best piece of wood we could on whichever model of gun we had in mind at the time. And in the case of this Kral, the subtle matt finish applied to the wood is perfect as it allows the natural figuring to show though. Creamy yellow and brown hues combine well with plenty of figuring and colour contrast, and if the quality of the wood on my test example is representative, I would have to say the Walnut option is clearly the way to go, given the very fair asking price.

Firstly, just consider the spec sheet, along with that appealing profile, and it’s clear this Devil has much to offer. Starting with that chequered Turkish walnut stock, there’s an articulated cocking linkage, adjustable fibre optic open sights, 2-stage trigger, in-guard safety catch and dovetail rails. Nice detail comes with those large panels of laser-applied patterning that cover the forend and pistol grip, and whilst they aren’t exactly diamond chequering, the end result is still highly effective, not to mention attractive. The rifle stock technically shows a right-hand bias because the cheek piece is only defined on the left side. In practice, it’s fairly shallow and with the grip being ambidextrous, there’s no real block to lefties enjoying the fun.

An honest appraisal of this test gun has to highlight that the front screw in the trigger guard is missing and it doesn’t appear to even have a hole drilled in waiting either. Sloppy for sure, yet this detail apart, construction feels solid and robust, with the only plastic/ polymer used being the muzzle assembly and piston end cap. All the metalwork is treated to what looks like a parkerized/anodized finish. If it is chemical bluing, it’s ultra matt, but at least it’s evenly applied, if a little lack-lustre. The bottom line is that the finish will unsurprisingly be done to a price on such a cheap rifle, yet the overall machining and build quality here is well up to the mark.

Those fibre optic open sights are nicely done and the fully adjustable all-metal rear sight is particularly impressive, with clearly marked finger wheels for windage and elevation. A hood on the foresight bead would have been nice for protection, but hey. Use those sights and enjoy the simplicity and quick target acquisition afforded, and the true delights of the humble break barrel can be enjoyed as they should be. If you fancy upgrading to a scope, then there’s a good length of dovetail rail to play with too.

Breaking the barrel is pretty easy and the subsequent cocking stroke is smooth and fairly effortless. Admittedly, the 18” barrel helps leverage, as does the moulded muzzle assembly. Just be mindful not to crush the foresight element when gripping that area. Push home a pellet into the breech, close the barrel and you’re ready. The lock-up is particularly sweet, with a satisfying click builtin. In terms of safety, it’s probably the best of both worlds, with an anti-bear trap device kicking in to block the barrel returning whilst cocked, yet the in-guard safety catch itself is manual, so can be ignored if necessary.

There does seem to be some confusion regarding the listed weight of this model, but my kitchen scales had it tipping at 6.2lbs for the record, making it suitably portable and stress-free for a casual ‘go-to’ rifle. One final handling feature concerns the trigger, which whilst a pseudo-2- stage affair, isn’t adjustable. That said, no great surprise on this grade of airgun, and in use, it responded well. Pull through the initial creep stage and the final release is actually fairly modest.

So what of the firing cycle? There’s modest recoil on firing, yet my test gun did let go with a real ‘twang’, showing all the signs of a spring-piston power plant in desperate need of some grease and lubricant. But hey, have another look at that asking price!

I’m often amazed at just how consistent many relatively cheap springers can be, and this Walnut clad Devil is a prime example. I shot several 10-shot strings over the chronograph with a variety of ammunition and was impressed. Webley Mosquito pellets posted a total spread of 8 FPS, whilst the ubiquitous Air Arms Diabolo Field clocked just 6 FPS. Brilliant consistency in anyone’s book. As for accuracy, over 25 yards, the Mosquitos just pipped it, with average clusters of 1” c-t-c. Highly acceptable results then.

I liked the Kral Devil when I tested a synthetic stocked version a good few years back, but the addition of the rather attractive Turkish Walnut furniture, well and truly transforms the handling and feel of this popular sporter. I found it great fun to shoot. At around £139, it has to be seen as a budget model, but in this more civilized guise, for traditionalists like me, it represents excellent value for money. It is unlikely to disappoint as a starter gun or general-purpose budget sporter.

Thanks to Range & Country Shooting Supplies in Sleaford (the only Premier Daystate dealer in Lincolnshire) for the kind loan of the test rifle.